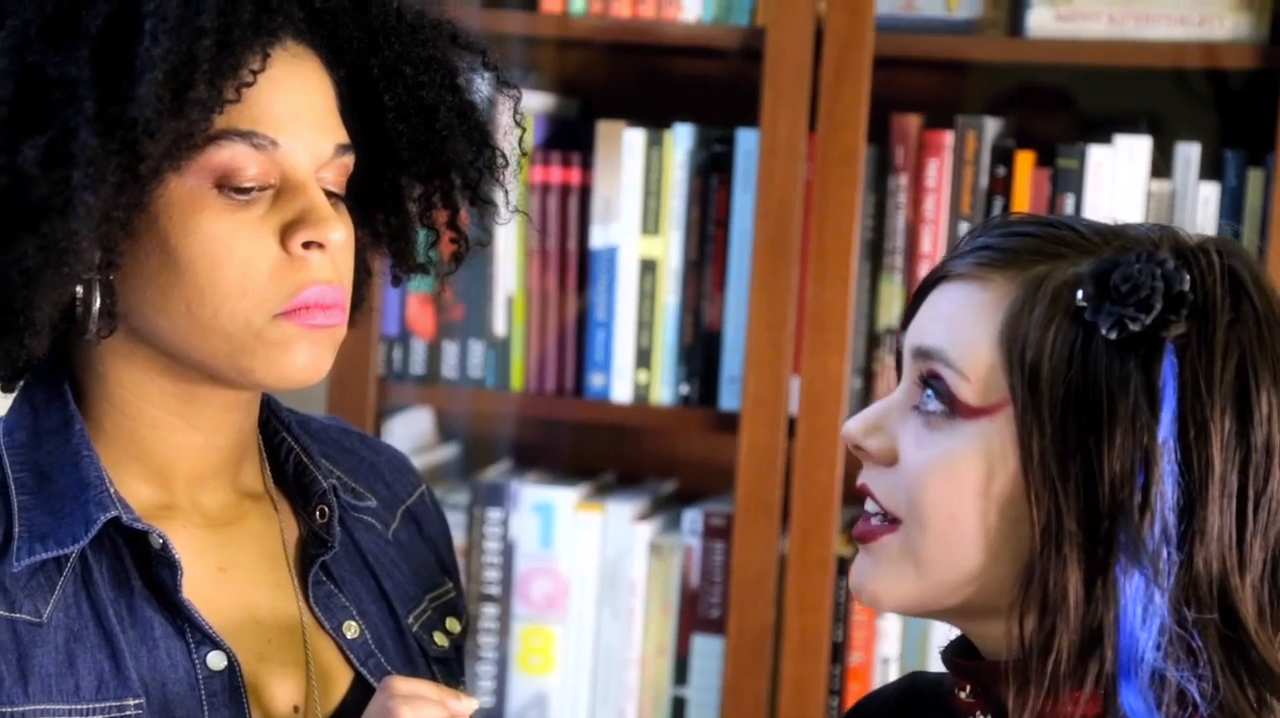 A Postmortem on (My) Immortal’s Second Season

I don’t think we’ve been shy about how much we love the (My) Immortal web series here at Nerd & Tie. For those unaware, “My Immortal” is an infamous Harry Potter fanfic which follows the exploits of the very “goffic” Hogwarts student “Ebony Dark’ness Dementia Raven Way.” The fanfic is so legendarily bad that it has a cult following (most notably on the site TV Tropes). Last year a bunch of Canadians decided to adapt it into a web series, rename the protagonist “Enoby” (after a regular typo in the source material), and turn it into probably the best thing ever to go on the internet.

It’s the best web series based on a fanfic based on movie based on a book we’ve ever seen.

We talked to series creator Brian McLellan way back in episode 16 before the season began, but a lot has happened since. Yesterday they released the ninth and final episode of their second season, so I thought I might take a look back at it with a critical eye.

So yeah, buckle up boys and girls.

We’re about to get all goff and stuff… again.

With a whole bunch of spoilers.

The Basic Plot:
Season one ended with Dumbledore dead, Violet (the Mary Sue daughter of Voldemort) defeated, Voldemort as dead as he ever seems to get, and Hermoine and Enoby talking about starting a band.

So they did. It’s not complicated.

The band soon ends up including Lizzy, twin sister of the now deceased Violet, along with pretty much everyone in the main cast. Except Enoby is often busy…

…off with her boyfriend Tom Riddle.

Because of course Enoby is dating Tom Riddle. Why not? It’s not like Tom’s a shadow of Voldemort trapped in a book who might try and destroy everything.

Tom has been releasing the tarot themed demon queens to terrorize the school, but he has bigger plans. Tom intends to bring back Voldemort by using a magic mind ruby to re-ensoul Voldemort into himself (after taking over the school and eliminating all the preps). The mind ruby, of course, happens to be the prize for the school battle of the bands.

A band that returns fan favorites Snap and Loopin to the series no less.

After failing to, y’know, win the battle of the bands, Tom’s minions just sort of steal the mind ruby. Because he’s a bad guy, and it probably would have been easier to start with just doing that.

After the chaos of the Battle of the Bands, Ron gets briefly kidnapped by some Death Eaters who try to recruit him. This is about as much as Ron Weasley can take, so he says screw it — he’s throwing a party.

And everyone’s invited to Ron’s Day.

Ron’s day is about as epic a party as you can imagine (and pretty much the best episode of any show ever put on the internet), but Ron doesn’t have as much fun as he’d hoped to. Enoby and Hermoine do end up kissing — which Enoby awkwardly runs away from.

Harry and Draco (who have been dating since Season 1 of the show) wander off after the party, but end up both being kidnapped. Harry by Tom, and Draco by “The Authority.”

Harry finds himself subject to Tom Riddle’s bizarre attempt to seduce him. Because nothing is sexier than being a fracture of the soul of the dude who killed your parents, y’know?

Tom’s “vampire style” seduction is through song, performed by Snap and Loopin. And it doesn’t really work.

Mostly because Harry isn’t a moron. But also because it’s Snap and Loopin. If they were any good at their jobs, Violet and Voldemort would have succeeded in season one.

Tom’s interrupted though by a tall gentleman from The Authority. He’s decided that the school has gotten too “goff” and that order must be restored. To be fair, Hogwarts is a bit of a mess at this point. I mean, seriously, Tom Riddle is openly living in what appears to be the school’s theater department basement, and no one in charge has done anything about it.

Draco appears to be brainwashed by the authority (because, remember, he got kidnapped too — just by these guys), and is under their control. Even though Harry and Tom almost get away, Harry’s love for Draco causes him to try to save his Slytherin significant other.

You see, the Authority likes Tom’s plan to bring back Voldemort – just so they can punish he who cannot be named. Of course, The Authority thinks the plan is to put Voldemort’s soul in Harry. Which is a conclusion you’d arrive at if you assumed Tom had kidnapped Harry for logical reasons.

Instead of knowing that any guy who dates Enoby inevitably wants to bang Harry Potter.

Snap and Loopin go get Hermoine to help them save Tom and Harry from The Authority, but after a brief skirmish, Tom ends up turning the tables by transforming our fine dressed man from the Authority into the Queen of Pentacles.

Because Tom is evil, and Tom does evil things.

Now that Tom has taken over the school, he and Enoby try to re-educate the preps (as Tom prepares his final plan).

In the end, Draco breaks from his “programming” and gets the gang together. The final battle has a few twists and turns I won’t spoil, but Tom’s severely miscalculated his importance to the story (he IS just a horcrux after all – and there are Mary Sues present). An old foe reappears and almost wins, but Hermoine (yet again) saves the day.

So yeah… the bad guys are defeated and our heroes are united in friendship. It’s a theme.

What Worked:
First off the cast of (My) Immortal is perfect. Justine Cargo’s Enoby is a spot on performance with way more nuance than you’d expect in a show like this.

There honestly isn’t a bad performer in the cast, and I can’t sing their praises enough. This is the series that finally made me love Ron Weasley.

Even if no one is believably the age of the character they’re cast as.

The writing is remarkably solid as well. Episodes like “Ron’s Day” show that a low-budget fanfic webseries can have humor, heart, and very real moments. It’s not what you’d expect from a show like this (as normally you’d just expect mocking parody), and it’s lack of cynicism is just endearing.

This is the kind of show I love.

What Didn’t Work:
Some episodes still feel a bit rough in the edit (the sound mix on a few episodes has dialog only coming out the left channel for instance). It’s the sort of sloppy mistakes that were more forgivable during the first season (when they had zero budget), but since the Second Season had funds it’s a bit harder to swallow this time around.

Like the first season of (My) Immortal, the weakest episodes are both the first and the last when it comes to feeling cohesive. They work, but nowhere near as well as the rest of the show. Perhaps some of it was rushing to meet deadlines in both cases, but it’s quite noticable.

The Final Verdict:
Rough edges aside, it should be really apparent that I love this show. I happily gave to the season two kickstarter, and will do so again if they raise funds for a third. The show is a work of love in many ways, and it comes through in both the writing and the performances. If you can look past a few disjointed episodes, you’ll find a series with more heart than you’d ever imagine.

Don’t get me wrong, it’s also a series full of inside jokes about a terrible fanfic you’ll probably never read voluntarily, but it might have ended up being only that.

Instead we got so much more.

If you have an afternoon to check it out, do so.

You won’t be sorry.