So Marvel comics announced (through “The View” of all places) that Thor (in the comics continuity) will be deemed no longer worthy of wielding Mjolnir and that a female character would be receiving the title of Thor and taking over his book. 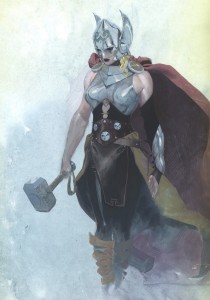 Since Thor’s the guy’s name though, it’s a bit like being fired and finding out “Not only have you lost your job, but you’re no longer allowed to call yourself Steve.” But I digress.

The way things are worded, it sounds like this new Thor is a separate character (and not just a transformed Thor like in “Earth X”), but we really don’t know anything else. A theory floating around is that the character is Angela, a former member of the Spawn cast who (through various legal wranglings) now exists instead in the Marvel comics continuity (and is the long lost sister of Thor and Loki). There are other options, as Thor’s cast includes several Asgardian women (and it could always be someone new), but based on what we know this is what seems likely.

I’m of mixed thoughts. Mostly that Thor isn’t a name like “Superman” or “Wolverine,” it’s the guy’s actual name. And if I’m wrong, and it’s actual Thor getting transformed? Cool. I’m good with that. But the name thing aside, this seems pretty exciting. In truth I’ve only read the Thor when the character crossed into other books, so I’m not as familiar with this continuity’s version to really make a call.

Regardless though, more women superheroes is good.

Unfortunately I only expect it to last right up until the next stand alone Thor movie.