You have probably never heard of the website “GaminG4Respect,” and hopefully after you read this article you won’t think about them a second time… but for now let me tell you a story.

A story about some of the weirdest moves I’ve ever seen a website make.

And I’m not talking about how it’s 2014 and they host themselves on Ning.

Some of you may have heard of well known cosplayer Jay Justice. She’s arguably the best known person of color cosplayer out there, and frankly (from everything I’ve ever seen her say) a very cool person. Gail Simone has said that she partially based the character Virtue from the ill-fated comic The Movement on Ms. Justice. My rule of thumb is that if Gail Simone is basing any part of one of her heroes off of you, you’re doing something right.

Anyway, Ms. Justice was contacted by GaminG4Respect for an email interview. She agreed, and asked them to send her the questions.

And then stuff got weird.

You see, before any questions ever arrived, GaminG4Respect decided to go crazy town banana pants. As Jay Justice wrote on her Tumblr blog:

A week later he suddenly posts an article with a photo of me on his site, deciding that I am trans without me ever having said that, anywhere, deliberately using the wrong pronoun for laughs and being very offensive IMO (I am not a trans woman and if I were I would not like to be referred to in such a way) and basically making up an article like it was too hard to simply ask me questions.

Long story short, don’t do any interviews with James Hollins of GaminG4Respect. I didn’t even DO the interview and he still did this. He basically turned me & my costuming into a joke at the expense of queer women of color and ended it with expressing an interest in meeting Laverne Cox (Lord protect her from him) and wanting to use the apparent popularity boost that he thinks featuring trans women will give him. I’m not even going to post a link, he deserves no web traffic from this.

I don’t wish to drive a single click of traffic to their website so here’s the screengrab of the article Jay Justice also originally posted: 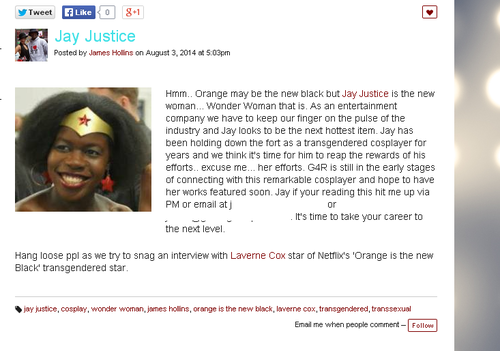 So let’s break this down shall we? Website no one’s heard of is going to take a notable cosplayer’s “career to the next level” by declaring her trans (which she isn’t) and then misgendering her (which if she was trans would be pretty awful on its own). It’s just super, super weird.

Obviously people began to complain, and the site did take the offending article down… and then wrote the following non-apology on their Facebook page:

Likewise their response to someone who posted to their page was pretty bad as well: 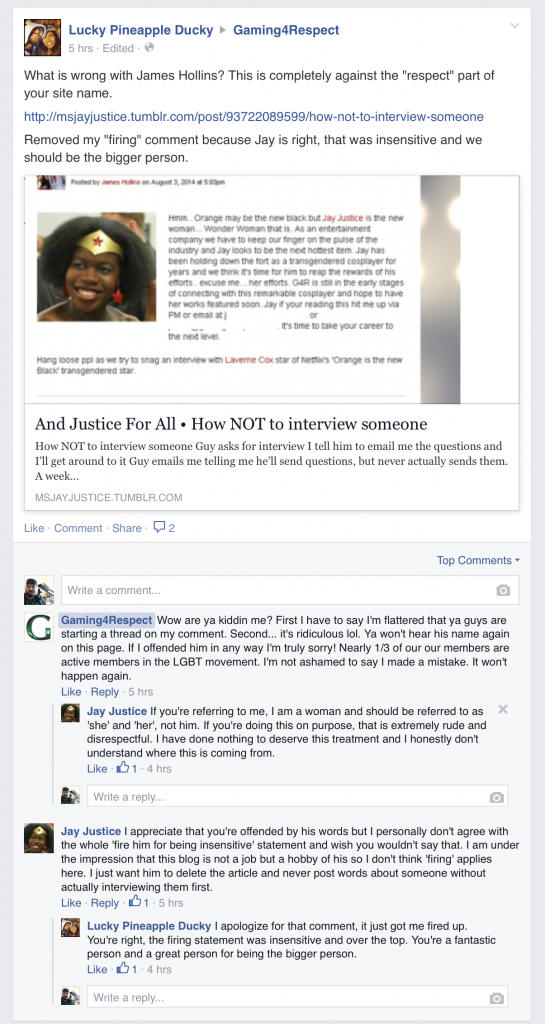 As you can see, they kind of just keep going. It’s like watching the Energizer Bunny of transphobic douchebaggery.

A part of my brain is honestly wondering if this wasn’t some misguided publicity stunt, but it’s kind of easy to dismiss when I realize just how awful their website is. I mean, it’s really, really bad. You are seriously missing nothing by my not including a link to it.

…I mean, besides some poor design and maybe a bit more terribleness.

Update: GaminG4Respect has issued an “apology” which doesn’t really address any of the actual issues with their article – like, at all. It’s really dumb.

Yep… that addressed absolutely nothing.