Anime News Network (ANN) is the english source for anime news and reviews. As a critic myself, I check it a lot and somewhere along the way I ran into the name Theron Martin.  I don’t remember specifically where, but I’m a regular reader of ANN and his name comes up a lot. Normally I don’t make a big deal out of disagreeing with critics. Its not the first time and it wont be the last, but what strikes me, or rather scares me about Theron’s writing is his shockingly dismissive attitude toward depictions of sexual assault in anime. The signs may have been there for a while, but this didn’t really stick with me what he was saying until I read his review of episodes 7-12 of Valvrave the Liberator.

For the unfamiliar, Valvrave was a particularly exploitative mecha anime produced by Sunrise in 2013. Fanservice and  blood were everywhere in this series, but the straw that broke the camel’s back for most critics was a shockingly graphic rape scene that took place in the tenth episode. The scene in question featured the main male character being overcome by a supernatural force, with whom he had previously made a contract, attacking a girl, throwing her to the ground, ripping her clothes off and raping her. The scene shocked several viewer, myself being no exception, so I was taken aback when Theron did his own review of the last few episodes of the first season and this was the second paragraph. 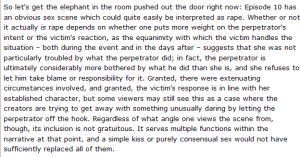 So let’s look at how incredibly uncomfortable this paragraph is. First off: Martin actually opens by questioning whether the scene being discussed was or was not a rape scene, despite using the terms “perpetrator” and “victim” in his description and only three paragraphs later referring to it as “the rape scene.” But Martin’s reasons for questioning if this is a rape scene or not are even more bizarre, noting that the “victim” does not seem as bothered by what happened as the “perpetrator,” citing this as if this absolves that characters and the writers of this barbaric scene and seemingly dismissing the notion that it is just a really poorly written rape scene. In fact Martin seems convinced it was quite the opposite, claiming it “serves multiple functions within the narrative,” which he never elaborates on since he changes the topic in the next paragraph.  One this is for certain though, Martin did not find the scene to be gratuitous. In fact the one other time he brings it up in the article he implies that the scene is practically subdued.

To put this in perspective, and I apologize that I have to do this, here are some screen shots from the scene in question. 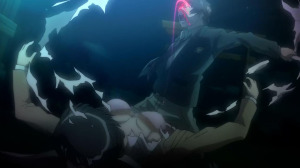 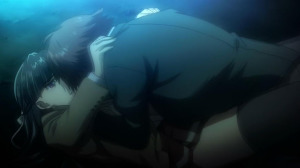 So it seems safe to assume Theron Martin’s views on this scene from Valvrave aren’t particularly sensitive or enlightened. At the time that I first read it, I was writing  the Valvrave episode of my series and while his article offended me I was also really upset with the series itself that I almost wondered if I was being too harsh. Nevertheless I screen-captured the offending paragraph and I had mostly forgotten it until I read another article by Martin, and the nasty pattern started to form.

One of ANN’s ongoing traditions is a seasonal anime preview guide, wherein the site’s regular writers chime in on the new shows coming out each new season. I had heard some nasty rumors about a series called Cross Ange and decided to check it out. Much to my disappointment, not a single one of the reviews denied what happened. The titular character, Angelise, is the princess of a dystopia where non-magic-users are culled from the population. She’s keen with this whole affair and even tells one woman who has her baby taken away that she should have other (normal?) children to make up for it.  but when it is revealed that the princess herself is one of these non-magic users, she is immediately sent to a prison and (anally) raped by a bondage-clad female prison guard, seemingly as fanservice for the audience.  Also it is implied that her scumbag brother wants to marry their younger sister to “purify the bloodline.” If you find yourself shocked and disgusted, then congratulations, you’ve got something in common with everyone else who reviewed this show. But there are two reasons this series didn’t get 1 (out of 5) stars across the board. One being that two of the ANN critics refused to even give the series the benefit of one star, the other being Theron Martin.

Martin having a differing opinion of the show isn’t the issue so much as WHY he doesn’t seem to take issue with it. (Though it is worth noting he gave the series 3 out of 5 stars.) Martin is concerned with the rape scene, but not because it is a violent depiction of a 15-year-old girl being violated for the audience’s pleasure, but because he is concerned over how the “fanservice” will serve as a “distraction” to the story. That’s not even the most offensive part as Martin, once again, is completely dismissive of the rape scene. Not only does he once again try to justify the scene but he justifies the scene calling it “Karmic Justice.”

That’s right, good old fashioned victim blaming. I guess its worth giving Martin credit for condemning the implied pedophilia, as he works in Indianapolis helping kids prep for standardized tests, but his insight on the actual  rape scene, calling it justice of any kind as even dismissing it because “body cavity searches are a fairly standard prison entry procedure” is truly horrible and it demonstrates that, more than once, Martin is willing to dismiss and even justify rape scenes.

Now I understand that the sexual assaults described above are fictional. I have no way to know how Theron Martin feels about actual sexual assault and I sincerely hope his critiques of it in media do not apply to the real world, but once again, ANN is the go-to for anime news and reviews in the English speaking world. In turn I feel that Theron Martin is speaking for my subculture and that terrifies me. Anime News Network is a great site, I continue to recommend it. But its readers and the subculture they represent deserve much better representation than Theron Martin.