We last talked about Fantasticon, which held its first event last fall, when we broke the story that they were out of money and wouldn’t run a second event. But beyond their staff’s obvious mismanagement which led to their closure, something felt off the more I read about their organization… so I began to dig.

What I found was a strange mixture of obfuscation and sketchy business tactics… and one instance where they broke the law.

That sounds more scandalous than it is, but still.

To begin though, and I hate that I have to say this again, the Fantasticon in Milwaukee was not related to Funfest Inc‘s touring Fantasticon shows. Nor is it related to the FantastiCon in the UK, and it definitely has no relation to the one in Denmark. Just a tip, when you’re starting a new convention: Google your name.

And that bit was weird.

Awesome Con Milwaukee’s cancellation just weeks before the convention was likely due to a lot of factors (including the low turnout at their Indianapolis show), but at no point was Fantasticon’s staff ever a friend to Awesome Con.

When Fantasticon Milwaukee was still expecting to run a second event, they already had their eyes set on expanding to a larger space – specifically the Wisconsin Center. In a comment on Facebook, Ben Penrod (President of Awesome Con) stated:

Fantasticon didn’t start there though. The summer prior, Fantasticon’s convention chair was directly contacting people stating they were interested in going to Awesome Con Milwaukee telling them not to attend the other show via Facebook.

According to one Nerd & Tie reader who wrote to me, they had been directly contacted and told not to go to Awesome Con because they were “East coasters.” The chair pleaded with this person to support “Wisconsin’s Own.” 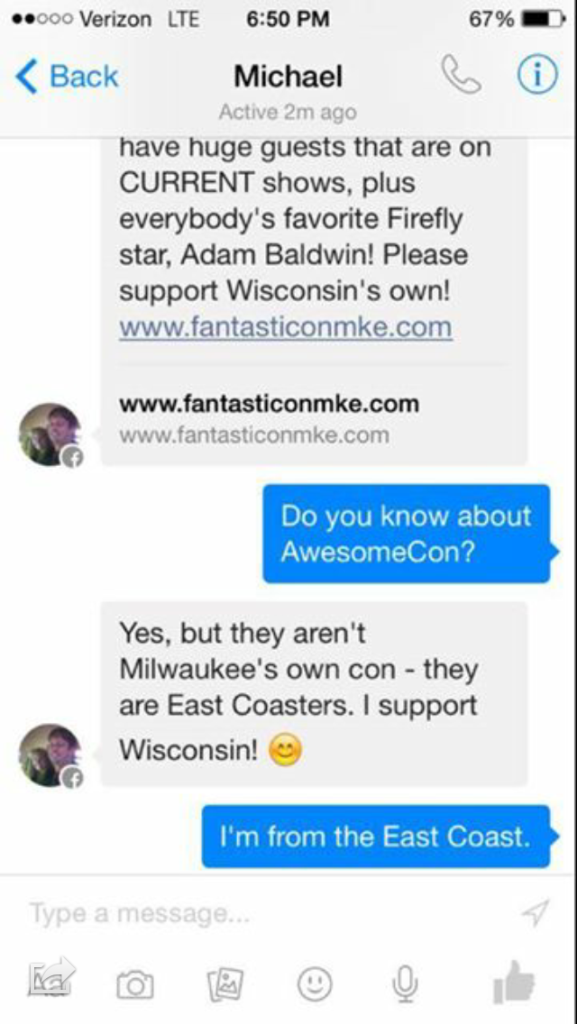 But here’s the thing: Fantasticon wasn’t Wisconsin’s own.

Who the heck is “Henry Jones?”
You may have noticed two names associated with the Milwaukee Fantasticon at this point, “Henry Jones” and the Michael in the screen shot above. More specifically, on all Facebook communications, Henry Jones is presented as the convention chair for the event. According to Henry Jones’s Facebook Page, he’s just a guy from Milwaukee, WI. Well, that’s all that I can glean at least, as he has the thing pretty locked down. 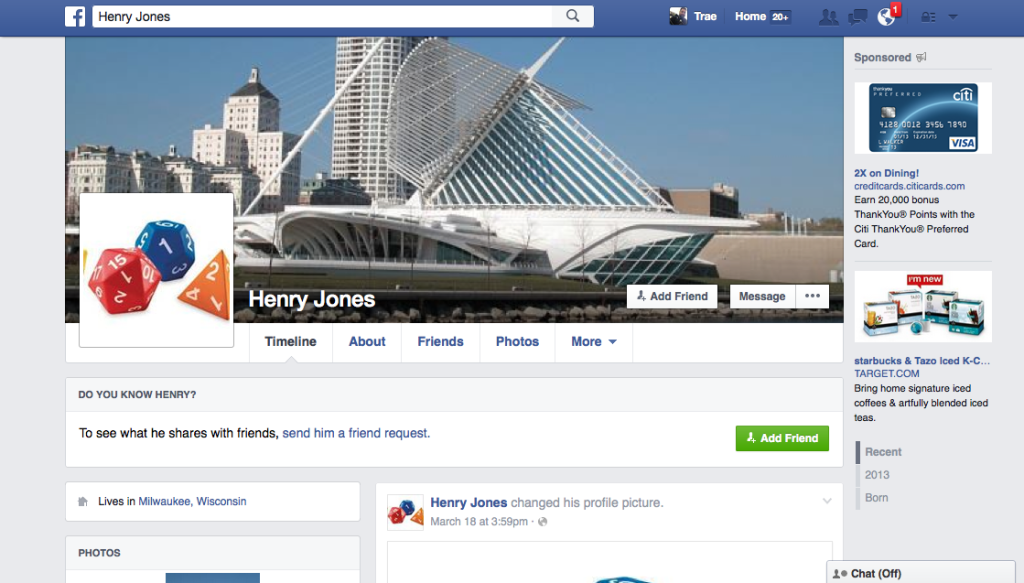 I spoke with Anime Milwaukee Convention Chair Corey Wood, and he assured me that “Henry Jones” was the Facebook contact he had for the organization. Likewise, it’s clear that the name was used when communicating with other groups – like the USS Chicago, who thanked “Henry Jones” on their website for a fan table.

I didn’t think twice about the name originally (beyond the fact that it’s shared with a cinematic icon) until I received an email from another Midwest Convention organizer (who would prefer to go unnamed) pointing it out, alleging that the real organizer was hiding his identity to protect his reputation.

And who was that person?

According to Fantasticon’s website about page (although it used to be more prominently mentioned on the site), the event was organized by “Phanatic Entertainment, LLC.”

Five minutes on Google (and with the handy, dandy state of Illinois) I was easily able to find that “Phanatic Entertainment, LLC” is an Illinois based LLC owned by one Michael E. Bollow. 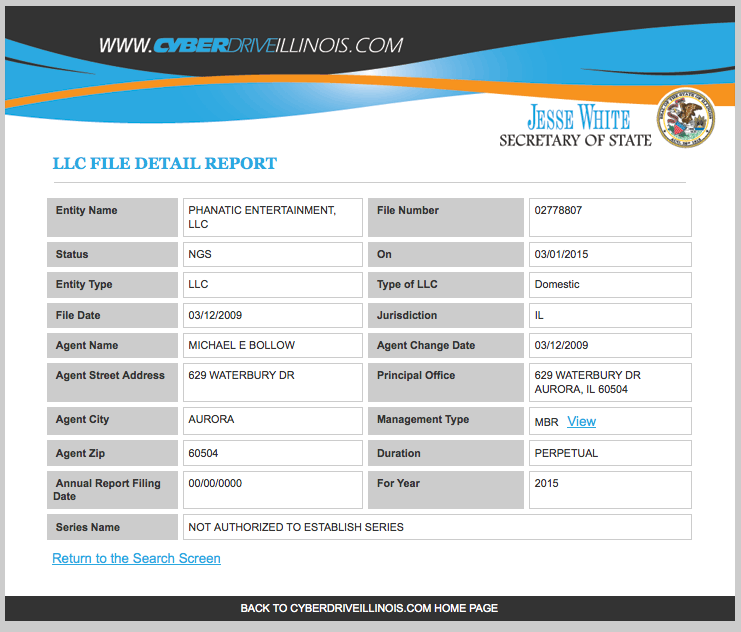 This would be, presumably, the Michael E. Bollow who had previously been randomly telling people not to go to Awesome Con, saying Fantasticon was “Wisconsin’s Own.”

Never mind that Michael Bollow is from the Chicago area, and was just as much an “out of towner” as the Awesome Con staff he disparaged. But hey, why does that matter when you can create a fake Facebook page for your con chair and just pretend they live in Wisconsin?

Edit: I’ve also been told by my sources that said Michael Bollow likes to cosplay as Indiana Jones… so… yeah.

The History of Phanatic Entertainment, LLC
Fantasticon wasn’t Michael Bollow and Phanatic Entertainment, LLC’s first convention. They recently ran the eleventh Military History Fest (formerly Reenactor Fest) in St. Charles, IL. Oddly enough, there was briefly a post about the event on the Fantasticon Milwaukee Facebook page from early this year that was deleted in March just after the Fantasticon 2015 cancellation was made public.

Which is weird, right? I mean, unless you’re trying to separate the public images of the cons for some reason.

Bollow’s Phanatic Entertainment, LLC also ran the CYPHAN conventions, which took place between 2010 and 2012. What kind of con was CYPHAN? Well, it was a science fiction and fantasy convention which looked a heck of a lot like Fantasticon.

Why did CYPHAN end after three years? I’m not sure. In a post to the CYPHAN 3 event page, when asked about the possibility of a CYPHAN 4, Michael Bollow said they were “Restructuring.” 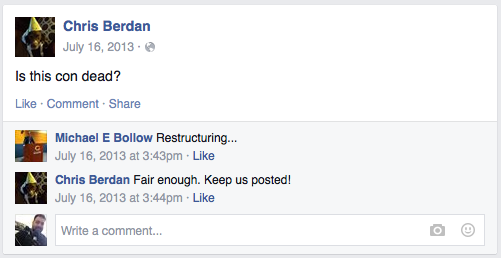 Now, as it’s several years later and a new event hasn’t surfaced under the CYPHAN name, one has to assume that it isn’t coming back.

But that means that an organization that already had one failed convention in one city, rather than look inward at their next failure, was still blaming everyone else in their new city.

The lack of self awareness is staggering.

Crossing (State) Lines
As much as Michael “Henry Jones” Bollow would like us to believe Fantasticon was Milwaukee’s home grown event, it wasn’t. Mind you, there’s not really anything wrong with an out of towner starting a convention — as long as they properly research and are prepared for the region they’re moving into.

And it all gets complicated when you cross state lines.

Phanatic Entertainment, LLC is, as previously mentioned, incorporated in the state of Illinois. Fantasticon, an event they ran, was in Wisconsin. For a corporation to do business in another state, they are required to register in said state as a “foreign” corporation.

Which would be illegal.

In the end, does it matter?
Maybe it doesn’t? I mean, here’s the thing – the convention scene is run by a short list of people. Bollow is not the first person I’ve run across doing sketchy things, and he won’t be the last.

But this is largely a community that runs on trust, and obscuring who is behind an event breaks it. It’s also a community that is served best by convention organizers willing to work with each other, which Michael Bollow seems unwilling to do.

But since he blames the very community he was trying to serve for his own failures, maybe it’s a good thing that he’s exiting the region.

And maybe someone else with a little more savvy, self awareness and communal attitude can move in.