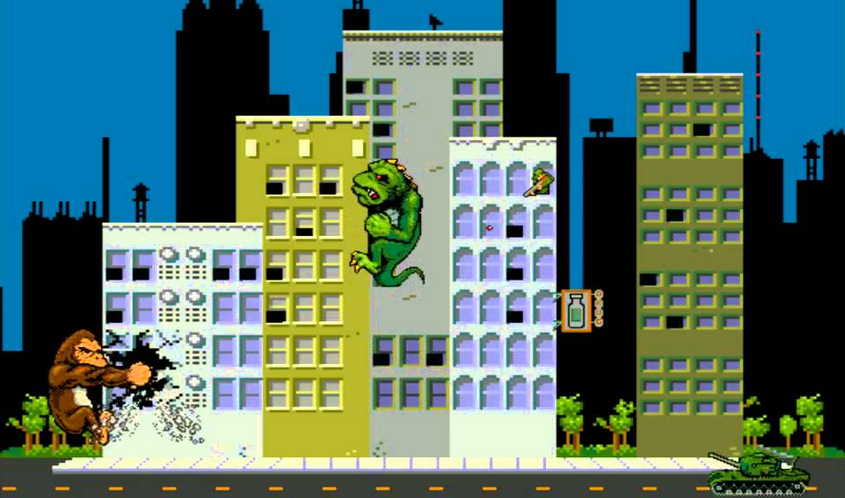 For those of you who don’t know, Rampage was a classic Midway arcade game where you played a giant monster that had to completely destroy a city. It was multiplayer, where one player was a totally-not-Godzilla Giant Lizard, another was a totally-not-King-Kong Giant Gorilla, and a third could be a I-can’t-think-of-an-analogue Giant Wolf. I’m mostly familiar with the NES version (which omitted the Wolf), but it was adapted to pretty much everything.

The point though is that games protagonists were the bad guys, and based roughly on the kaiju genre.

Well, in a baffling decision, New Line is planning to adapt Rampage into a film starring Dwayne “The Rock” Johnson.

This is the most puzzling Midway video game related film news involving Dwayne Johnson since he almost starred in a Spy Hunter movie (and ended up starring in the tie in game for a movie that never existed). I mean, don’t get me wrong – I’m not against this movie happening, I’m just super confused. I mean, I’m assuming that Johnson will play the hero fighting the monsters in the end, and it will end up being like any other human POV Kaiju film — but then why even bother paying for the Rampage name?

Maybe it would keep Toho from suing?

I mean, honestly, I would love to see The Rock in a rubber Kaiju suit punching buildings to the ground, which would capture the irreverence of the original game more than whatever they’ll really make, but I am resigned to probably just getting an entertaining giant monster movie instead.

…but a man can dream.