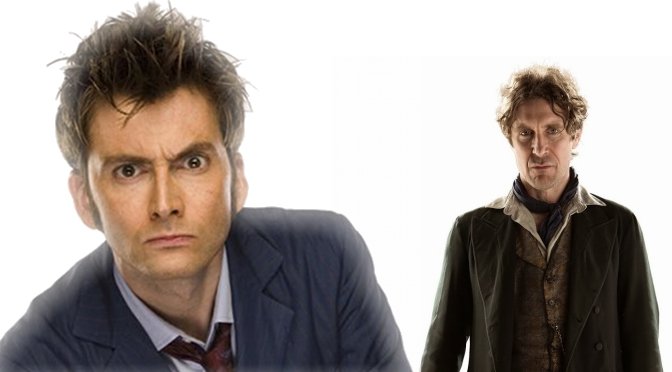 So take this with a massive tablespoon of salt, but it’s a rumor so fun I can’t help but bring it up. Apparently, the most recent crazy-ass rumor is that both David Tennant and Paul McGann will show up in this upcoming series of Doctor Who.

The David Tennant part may be more solid, as rumor has it that they’re shooting scenes that take place during ‘The Fires of Pompeii’ episode that Peter Capaldi had previously appeared in (as another character, obviously).

As for McGann, there are a range of rumors spanning from “Time Lord Ghosts” to the Doctor visiting his past incarnations. Another theory is that the Doctor will temporarily devolve into his past selves. Honestly? I don’t care what it is if I can see more McGann’s eighth Doctor on screen.

All of this, of course, would be because of the revived version of the show’s tenth anniversary — a way of celebrating it without making a big deal about it (like the 50th anniversary was).

And, of course, maybe none of this is true. Maybe it’s all smoke, and we’re just jumping at shadows… but a fan can dream.