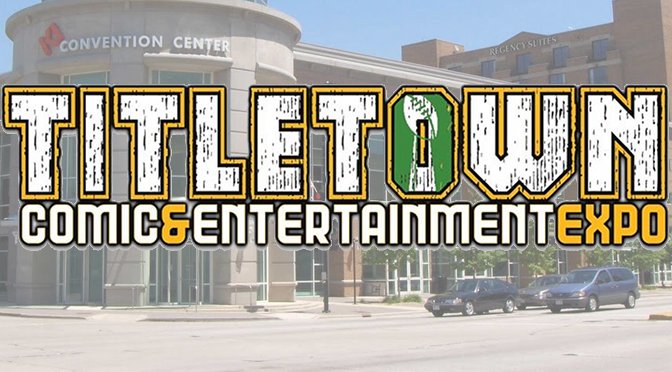 Titletown Comic & Entertainment Expo (TCE2) is a first year convention scheduled to take place October 2nd-4th in Green Bay. Of course just because I say “scheduled” doesn’t mean it will actually happen — not unless something changes soon at least.

TCE2 is in trouble.

The convention currently finds itself in financial straits, and with the doors set to open in only a month it’s hard to imagine how the event’s organizers are going to pull this one off.

Yesterday, TCE2 made the following announcement on their Facebook page, stating that they plan on dramatically cutting down their guest list:

Curious what “fraudulent sponsors” meant, I reached out to TCE2 organizer Denni Towle to get an explaination. He sent the following email in response:

I had 2 backers that pledged $3k & $7k each. I contacted them this morning to get the money and the phones were not correct. I sent emails that bounced back & just got word that they were fake people deliberately sent to me. So I have to make up that $10k in only a few days or I can’t buy flights. I’m so sick to my stomach right now.

If what Towle has said is true, this is may finally be the last nail in TCE2‘s coffin. The organization has been scrambling to raise money, with a failed kickstarter and an almost immediately abandoned (but still technically ongoing) Indiegogo campaign, and one has to ask if the current money issues are going to be the straw that breaks the camel’s back.

Because this is far from where TCE2‘s troubles began.

TCE2 originally was scheduled to take place in August of this year, but was delayed when the organizer Denni Towle fell off a cliff in May (yes, that really happened). While Towle was in recovery, his co-organizer Thom Hazaert left the con. I don’t know if Hazaert’s deptarture is related to the current money woes, but based on his sketchy past I wouldn’t be surprised.

It was after this incident that the organizers of TCE2 began to cancel various planned parts of the event, including an entire wrestling track of programming.

But the issues aren’t just money based. While Towle seems like a guy with a lot of experience in the music world, his management of TCE2 has been questionable at best. Some have asked how TCE2 can call itself a comic convention, as there seems to be very no comics content listed: 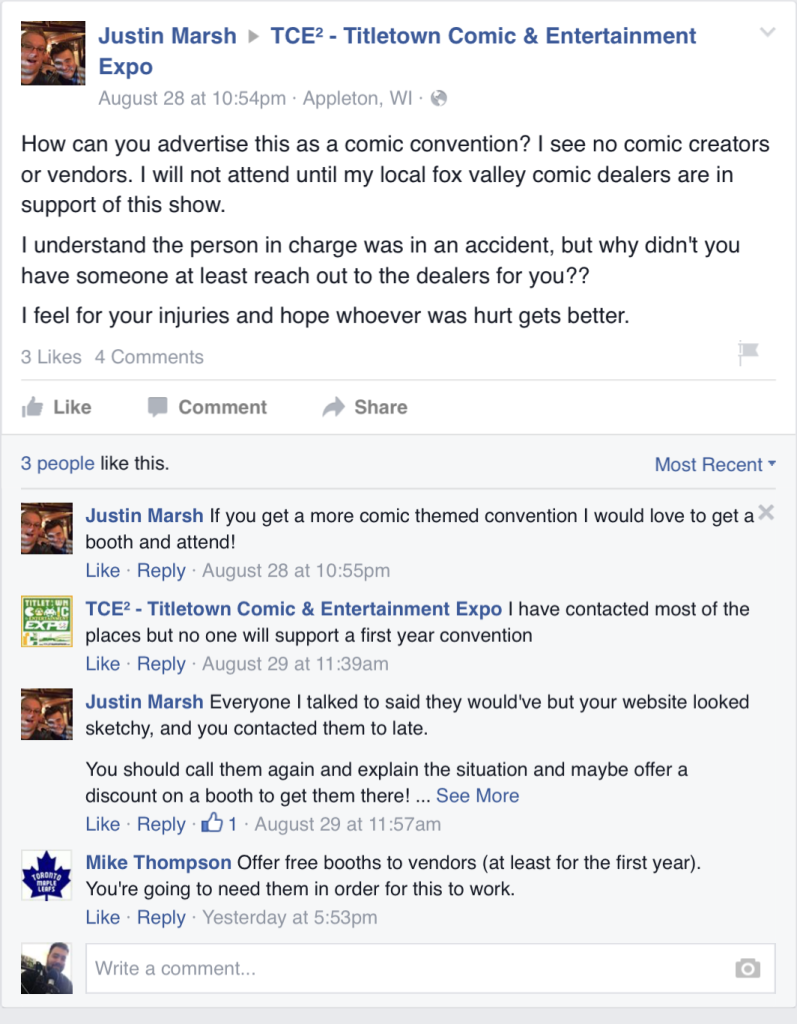 TCE2‘s claim that vendors aren’t willing to take a risk on a first year con is, frankly, puzzling. I’ve run first year events (Full disclosure, Nerd & Tie is currently planning a new convention) and in my experience vendors respond fairly well if you’re straight with them and give them the information they need. Many will jump at the opportunity to get in on the ground floor a new event if they think you look professional.

Of course, one reason TCE2 may have had problems with a response is that there is literally no vendor information on their website. The link for vendors leads just to an email, and when vendors encounter that? Well, most of them start looking at different shows. These are people who plan their calendars a year to six months ahead of time. With so many cons currently out there, vendors aren’t lacking for choice — and they’re not going to wait for an event to post its rates.

Other key information that is usually seen as a basic requirement at conventions is missing as well. There is no mechanism to submit panels for instance, and we’ve now reached the point where most cons have closed submissions for that sort of thing. Now maybe they aren’t planning a panels track, but it’s something that’s pretty much expected at most cons in the region.

Frankly, the whole website is a mess and rife with errors, from broken links on some subpages to bizarre things like bios for one actor listed under the name of another. Heck, I found Lorem Ipsum text and other placeholders left behind in some instances too. 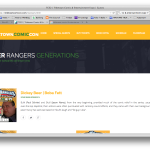 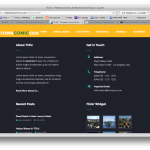 Their Facebook page has repeatedly stated that the con’s website was going to be updated and fixed over the last month, but said changes have yet to materialize.

I don’t think they will, and even if they do it may be too little too late.

TCE2 also has done very little to promote at other Wisconsin events. Frankly, I was unaware that it even existed until a few weeks ago when I was talking to a friend of mine from Green Bay… and I do a lot of conventions in Wisconsin.

It’s too bad really too – an ambitious independently run comics show may just be what the area ordered. While the broad based “Wisconsin Model” cons that have sprung up over the last fifteen years (like Green Bay’s Kitsune Kon) cater to Tabletop Gaming, Video Gaming, Anime and Science Fiction audiences, the comics audience has been frequently left on the outskirts — the domain of small, one day shows instead.

Having an anchor event run by someone other than Wizard World in the state would have helped resolve that situation.

But it looks like we won’t get that anchor event. Even if TCE2 manages to roll through and actually happen (which would likely only be if Towle does so at a personal loss), it’s unclear if they’re willing to make the changes they need to down the road. The con has been the victim of both outside forces and their own mismanagement, and I think their future is looking bleaker and bleaker every day.