The Grudge/Juon series of films were probably the scariest things I’d ever seen when first I watched them a dozen years ago or so. The original Japanese version of The Ring was likewise one of the best horror films to find international success in the last twenty years. Well, those two great flavors are now coming together, just like if someone got their terrifying chocolate in my horrifying peanut butter.

After a fan mashup trailer went viral, the folks at both Kadokawa and NBC Universal Japan realized “Hey there’s money on the table here” and started production on the film. Sadako vs. Kayako (the actual name of the film) will pit the two phantoms together, and is set to come out later this year.

They’ve also released a poster and teaser trailer for the film. 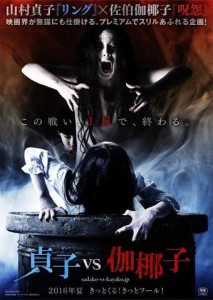 Kōji Shiraishi is directing the film, with Mizuki Yamamoto starring. The film is expected to come out in June of this year.