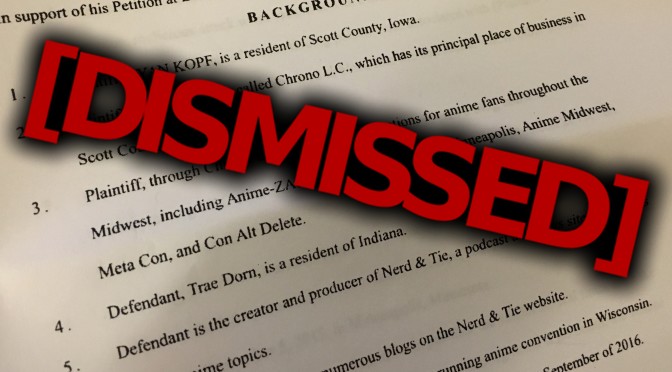 So for those of you not following along, for the last several months AnimeCon.org/Chrono LC CEO Ryan Kopf has been suing some of us here at Nerd & Tie. He began by directly suing me (Trae Dorn), and then later expanded the suit to include Nerd & Tie contributor, co-host, and co-creator Pher Sturz. If you’re not sure who he is, Kopf directly runs Anime Zap!, QC Anime Zing!, Con+Alt+Delete, Animinneapolis, Metacon and Anime Midwest (and has ties to Black Materia, Inc and Anime California).

As the suit progressed, my lawyer successfully got the suit against me dismissed on the grounds of personal jurisdiction (as Kopf tried to sue us in Iowa). Before the judge could even hear Pher’s motion to dismiss though, Kopf’s lawyer attempted to fight this. Even after the case was dismissed against Pher Sturz, I was still dealing with motions to reconsider.

Well, today I have good news.

This last week, the final motions to reconsider were finally denied. With that, I have been assured by my lawyer that (fingers crossed) this entire mess is done. Since its true that since the case was dismissed on the grounds of jurisdiction, Kopf could refile the suit in Indiana (where I am actually based) though. If this occurs, we’re certain things would still go in our favor — as I stand behind the factual correctness of all of the articles published here on Nerd & Tie.

Because, as we all should know, American defamation law does not apply to true statements and opinions.

We’d like to thank everyone who helped support us through this. The majority of our legal defense was paid for by readers like you who chose to contribute to our GoFundMe campaigns, and the fact that you all were willing to put your hard earned money to support this rinky-dink website means a lot. Hopefully what’s published here will continue to be worthy of your support.

(I will say that if you still are willing to help out, Pher Sturz still owes a couple hundred dollars to his lawyer. His GoFundMe is still open if you still have any spare cash you can throw his way.)