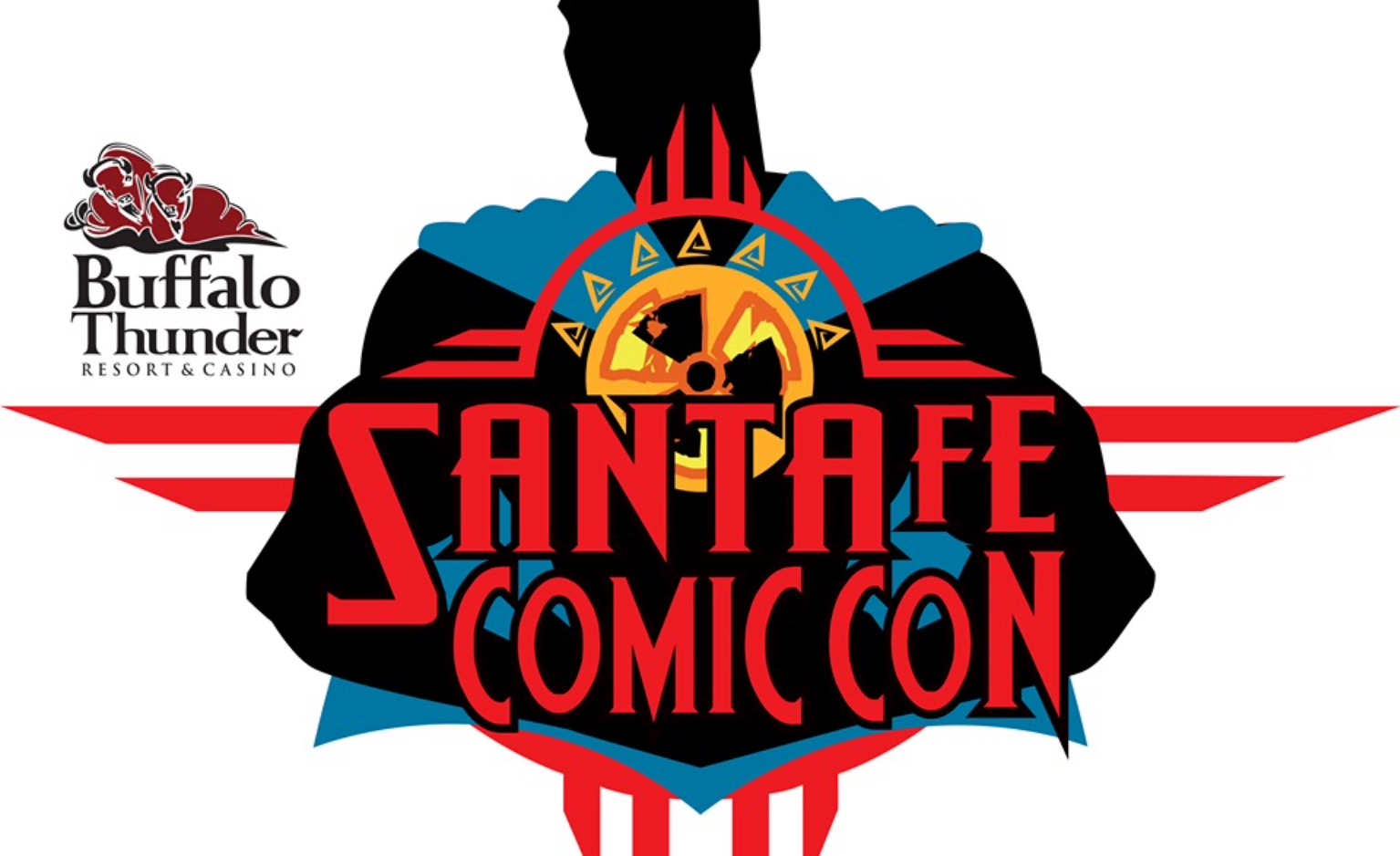 So most people who aren’t from the Southwest probably rarely think about Santa Fe Comic Con, but over the last couple of days they’ve made quite the name for themselves — all thanks to their Facebook page. You see, the con made the following (now deleted) post mocking an unnamed professional cosplayer who asked to be a guest: 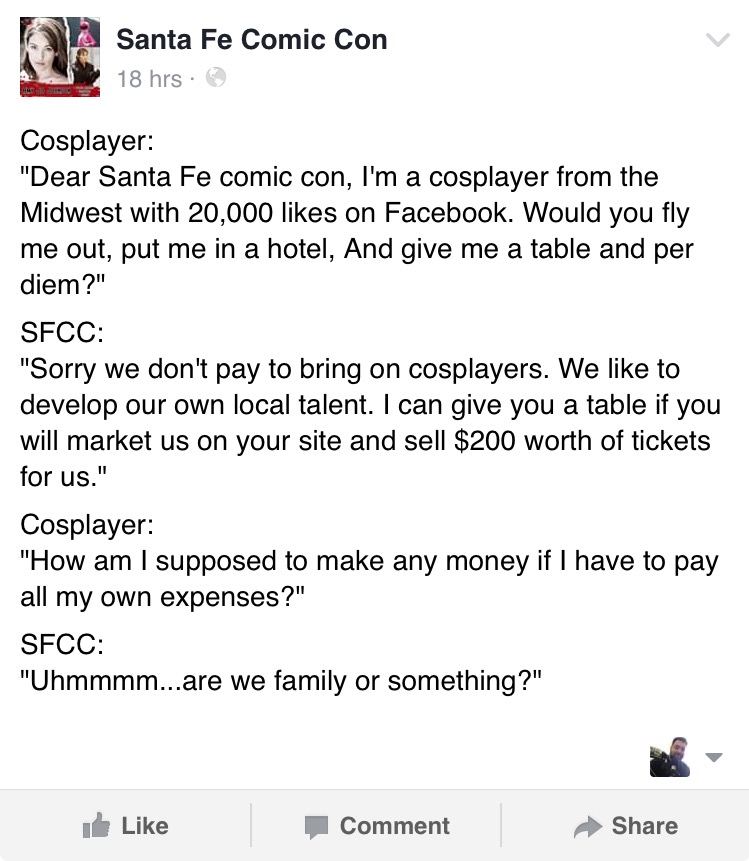 This is quite probably one of the dumbest posts I’ve ever seen a convention make — and in part it’s because they made a public issue out of something that never had to be.

While some have claimed that this is a “chat transcript,” it’s most likely a convention staffer paraphrasing a conversation. The con also dug their hole deeper in follow up comments, and then finally deleted the entire post.

And it’s all insane.

But let’s get to what actually happened here. There are people who have taken the con’s side in this, and there are many who are outraged. I’ve been working cons for a couple of decades (and been a guest of honor at others), so I think I can offer a different perspective on this issue.

What it looks like to me is that the cosplayer reached out to Santa Fe Comic Con requesting that she (I’m assuming the gender based on other comments by the con) be brought in as a guest. In that request, she spelled out what she would require (travel, lodging, etc). I can tell you that I’ve literally seeen dozens of emails and messages like these over the years, and they’re not unreasonable. Frankly, I’ve always preferred them, as they let a con know whether or not a potential guest is within their budget upfront.

Santa Fe Comic Con balked at this request, and made a counteroffer, which was way less than what the cosplayer wanted, so she said no to the con. It was a basic failed negotiation, and should have ended there…

…but of course it didn’t.

Why it never occurred to Santa Fe Comic Con’s staff that randomly acting like a dick on the internet was a terrible idea I will never be sure of. I mean, it takes a particular kind of stupid to openly mock a growing segment of the convention population even if you don’t like them.

But this also highlights the divisions in fandom.

Cosplay guests came heavily out of the Anime convention circuit. The fact that cosplay has existed at all flavors of conventions for decades, yet we now use an originally Japanese portmanteau indicates that pretty firmly. Santa Fe Comic Con is, as the name implies, a comic convention though, and while many people dress up, it’s not as culturally important a thing.

I mean, if you’ve never been involved in the Anime Con cosplay circuit, you just really have no idea.

The Santa Fe Comic Con staffer who replied seemed offended that a cosplayer would be asking for so much, but frankly (when an Anime con brings in a cosplay guest) this is all super standard. I mean sure — a con might choose to only invite people in driving range, but it’s because asking a guest to pay for their own travel is just considered offensive to a lot of con staff’s.

This isn’t so in the comic con world though. Many cons are only willing to pay for the big names and that’s it. The scene can often times be very different, and as the convention scenes slowly merge (as the culture seems to bleed a little more general every year) these difference become more and more apparent.

While Santa Fe Comic Con has no obligation then to bring in a guest who would attract something other than their desired target audience, to be shocked that a Cosplayer would ask for said things shows how out of touch with the greater community their staff is. It’s up to conventions to be on top of what’s happening in the greater community, even if they still want to go a different direction.

Finally, since cosplay attracts an inordinate number of women instead of men, this can’t help but feel this entire kerfuffle is in many ways misogynistic. I don’t think I’m off base here, as the convention referred to professional cosplayers as “boob models” in one of their now deleted comments. It’s hateful, and considering how anime cons have grown over the last twenty years, myopic beyond belief.

I guess the takeaway here, at least for events like Santa Fe Comic Con, is don’t say stupid shit on the internet. Don’t assume that someone’s being unreasonable just because they’re asking for something that you don’t want to give. Just decline politely and move on — because what seems ridiculous to you may actually be business as usual elsewhere.

And you may come out looking like a dumbass.

Update: You can read most of the bizarre, hateful comments made by Santa Fe Comic Con on the now deleted post. Santa Fe Comic Con also decided to throw gas on the fire when they announced Amy Jo Johnson’s guest cancellation and included a screenshot of her agent’s email (which included the email address). They’ve now deleted the post as well, but here’s a (censored) screengrab. 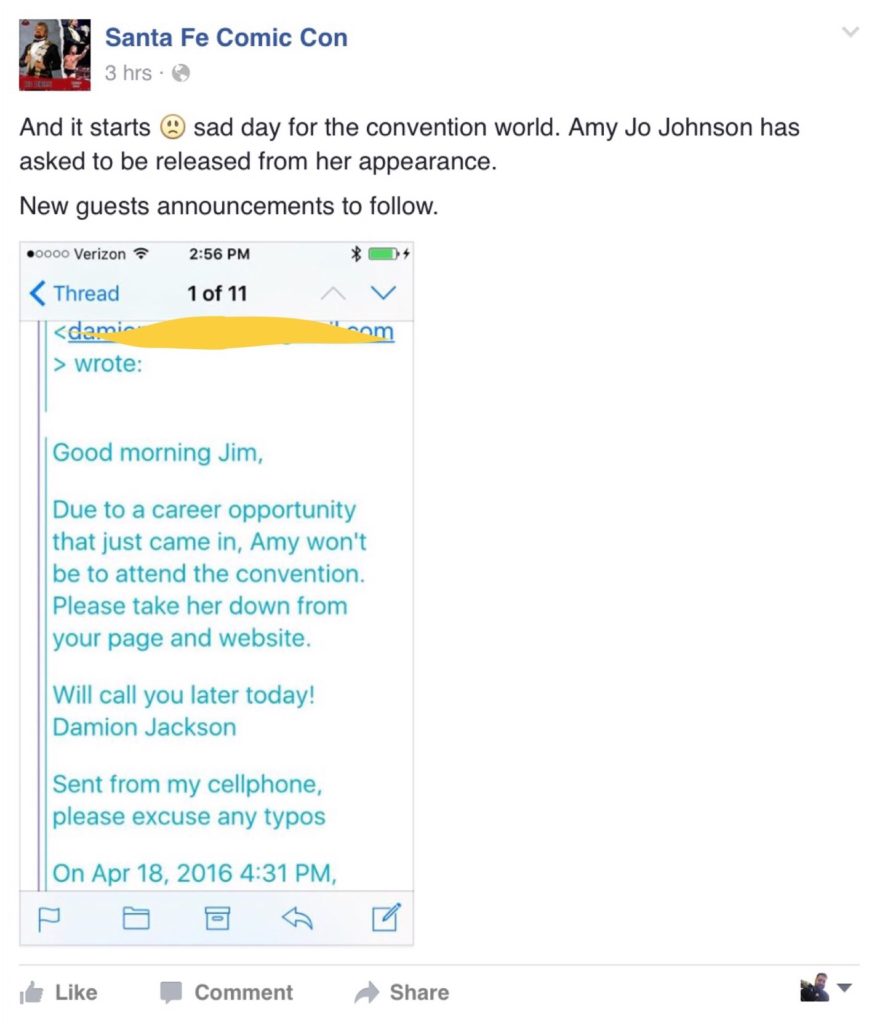 Update (5/16): I can’t believe it, but Santa Fe Comic Con posted another screenshot of the email from Amy Jo Johnson’s agent without censoring the email address. You cannot make this stuff up. 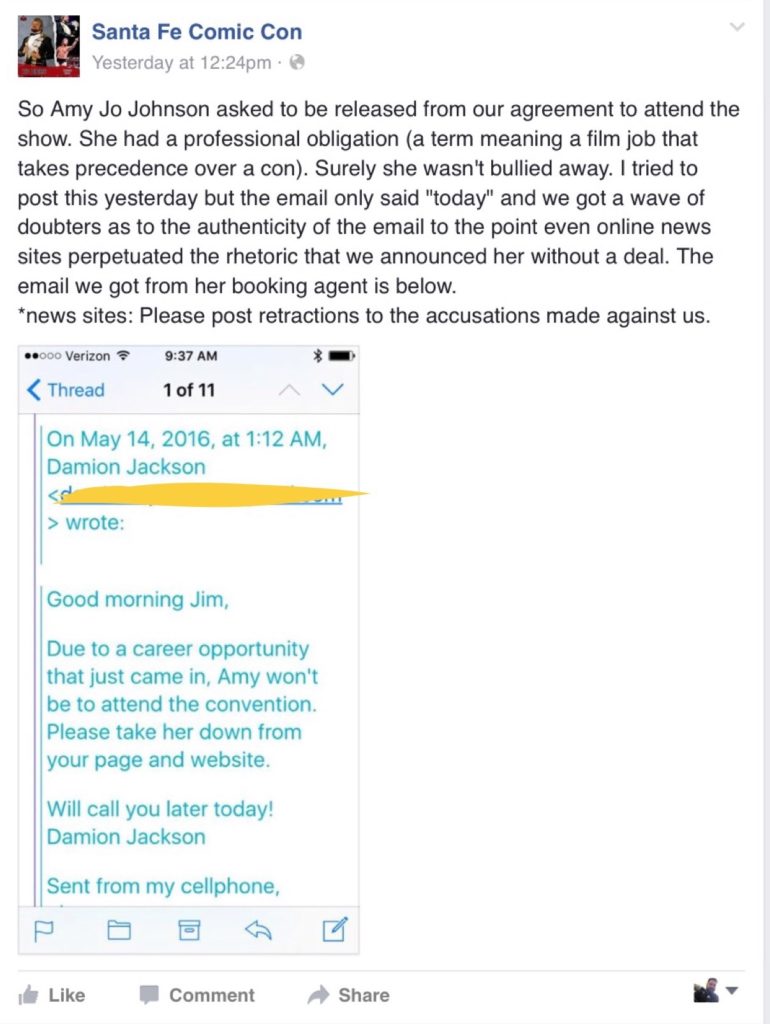 2 thoughts on “Santa Fe Comic Con, a Split Con Culture, and Why You Shouldn’t Act Like a Tool on Social Media”