A few months ago I watched the first of two live action adaptation of Attack on Titan and it was TERRIBLE. I’m not sure my previous review even did it justice. Sure it wasn’t true to the source material with terrible costumes, laughable special effects and bad lighting, but I didn’t describe just how truly awful the dialog was. I can’t imagine an actor being able to make that script work.

So yeah, that movie was terrible, unbelievably terrible. The sequel is somehow worse. 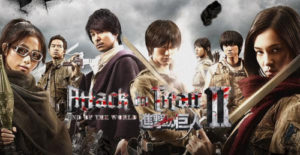 When we last left our intrepid heroes, the plot had awkwardly attempted to course correct with a shockingly-close-to-the-source-material climax that culminated in Eren turning into a Titan, kicking all sorts of ass and then passing out as a regular dude again. When we meet up with him in this, he’s chained up in front of the homeland’s high command. (Who are dressed like Nazis for some reason.) The Big-wigs are afraid of Eren’s newfound ability but before they can do anything about it, their little council is attacked by a new Titan, The Armored Titan, who smashes them up and makes off with the chained up Eren, leaving the remaining leads from the last movie scared and confused.

When poor Eren comes to, he finds himself in… well I’m not sure how to describe it, it looks like the Batcave from The Dark Knight. Like remember the big white, well-lit room? It’s like that, but with more chairs. Shikishima shows up, as if this is HIS place. Some of you might be thinking around now: Well this sure is starting off weird. Are we ever going to get any of this insanity explained? Well don’t you worry because explanations are coming. Big stupid explanations. The Titans themselves are one of the most mysterious parts of this story. They’re literally monumental and very mysterious. If you’re going to spell out what that mystery is, you would expect it to be something equally monumental, something chilling, maybe still even a bit mysterious. Well this movie decides it’s qualified to spell out exactly where the Titans come from and so, for almost no reason, Shikishima just shows Eren meticulously documented video footage of the military testing drugs on people that turn them into Titans. Apparently the experiment got completely out of control and the all human society was sent back to the stone age.

Yet here’s Shikishima, with his electricity and videos and his Batcave who is part of a secret order of technologically advanced Titan supporters and I’m just flabbergasted. Its not just that the Titan reveal was lame, its that from here on out the film isn’t even about the same thing anymore. My eyes widened as I stared at the screen, jaw agape, with no hope of ever regaining my suspension of disbelief. But the movie moved forward and with it my fears were confirmed. Eren and Shikishima meet up with the rest of our heroes who are riding around in some trucks. Shikishima is accompanied by his aforementioned human followers. They’re armed with modern machine guns and a freaking tank and they’re planning to blow up the walls so that the Titans outside can get in and eat everybody??? Anyway, our heroes aren’t so keen on this course of action so they set out to fight Shikishima and his followers sending them spiraling toward a bizarre and finale wherein Shikishima’s buddies are easily killed. Shikishima shifts into the armored Titan, so he and Eren fight. Somehow, this nonsense forces Eren and Mikasa make up. (She’s barely in this movie either, so much for “focusing on their relationship.) And finally the Colossal Titan turns out to be the military leader and then they have to fight him after Eren can’t shift anymore because he used up his Ultraman powers fighting Shikishima so they blow up the wall with the big guy in it because… Because screw it, I was just happy it was over.

Right up the very end the movie can’t decide what it wants to focus on. The characters are somehow more flat than they were last time and the music is still forgettable, save for the closing credits which are entirely inappropriate. This is all made worse by just how cheap this movie looks. As this movie has our heroes still venturing to the outer walls there’s no actual city to be see in this movie, just open fields, uncomfortable real world WWII ruins and a sense that everyone just wanted to get this movie over with and I obviously sympathize.

After the relief of this movie being over had left me, I was stuck with a sinking feeling that haunts me even right now. Shinji Higuchi made the amazing Gamera Trilogy in addition to my favorite Godzilla film long before he directed these two steaming piles, but it scares me that he is co-directing Godzilla Resurgence (Shin Gojira). I want it to be a good movie. Not just because I love Godzilla but also because this has been a passion project Hideaki Anno, the other director, has always wanted. I don’t want that movie to be a dud like these things were. But since worrying about the future won’t get me anywhere let me instead suggest that if you need your Attack on Titan fix, to no watch these and maybe rewatch the anime or read the manga… or literally anything else.