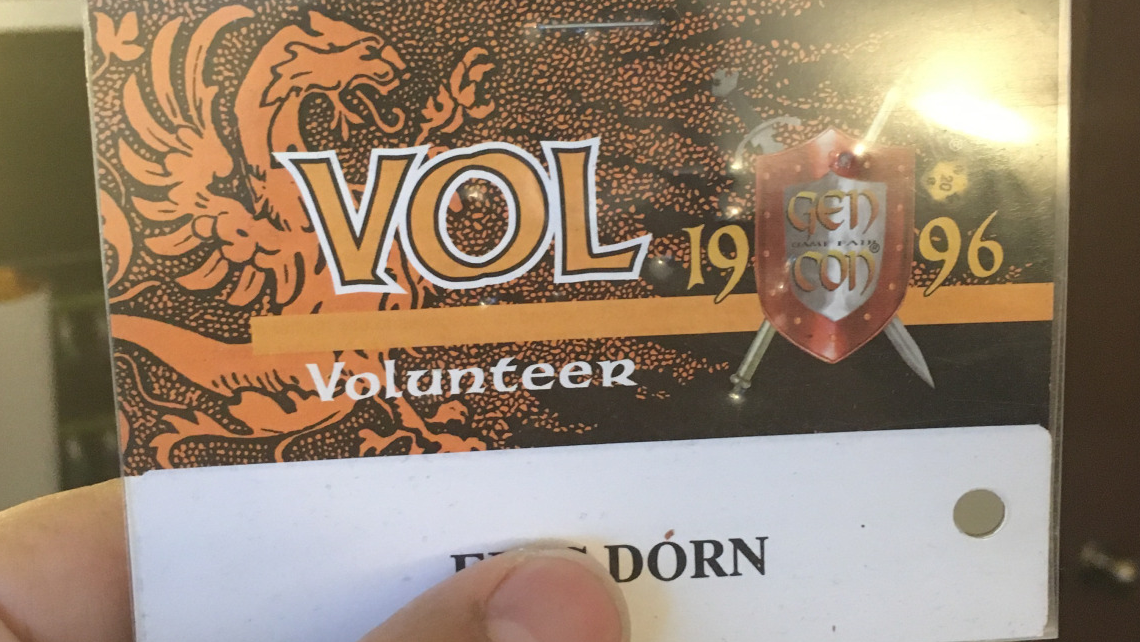 Twenty years ago today, on August 8th, 1996, I picked up my Volunteer badge at the MECCA convention center in downtown Milwaukee for that year’s Gen Con. Even though TSR’s policies required volunteers to be at least eighteen, I was only fifteen years old at the time. But I was tall, had a large vocabulary, and was a member of several local science fiction fan clubs (Starfleet Academy of Greater Milwaukee and the KAI chapter IKV Duras), so no one thought to check my ID.

And it was the day that everything changed for me.

I attended a few other conventions during my teenage years, but mostly stuck to volunteering at Gen Gon throughout the rest of the 90s. I went on to co-found No Brand Con in the early 2000s with some friends — and I stayed a major part of that staff for a decade. I’ve turned my stories into a semi-successful comic, spent a few years working as a vendor, started selling my own stuff in Artist Alleys, been an actual guest at a few conventions, and am now trying to get a new event off the ground.

You should totally preregister for that by the way.

I’ve seen the Midwestern convention scene change, collapse, rebuild, and go to places I would have never thought possible. I’ve seen cons spring up in towns I never imagined could sustain them, and events that looked like they’d have an easy road ahead immediately collapse. Throughout it though, I just continue to be amazed at how the convention scene can be a positive force. How it can create a real world community for people who might otherwise feel alone out there.

I know we write about the negative things that happen here, and try to shine a light on bad actors — but in the end I think that overall conventions can be a positive force. They’re where I found a home when I was at my worst, and I hope that people who are in the same place that I used to be can find that community too. And I’ve been helping build that community for twenty years now.