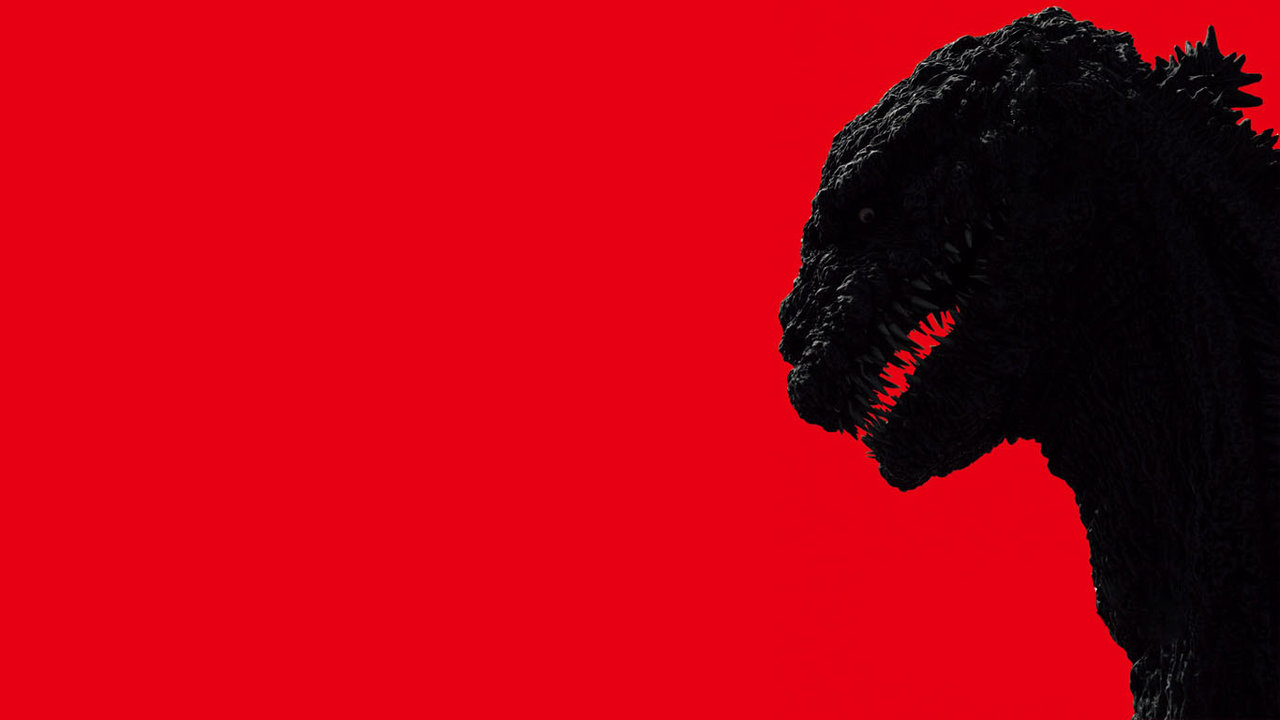 To say Hideaki Anno had a lot to accomplish with Shin Godzilla might be the biggest understatement of the year. Making the first Japanese Godzilla film in more than a decade is a pretty tall order on its own. But this one also had to mend Toho’s pride after getting Out-Godzilla-ed by Americans in 2014. I’m pleased to say that I think Anno successfully fulfilled this tall order,  but how he went about doing it is what I think is truly amazing.

Shin Godzilla is a great movie. Let me put that up front. The cast is very strong, the titular god-lizard is the stuff of nightmares, and, after processing the film for a couple days I feel safe in saying that this is Hideaki Anno’s best film. 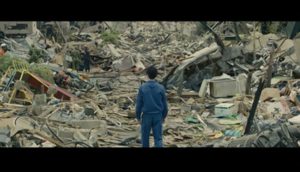 Shin Godzilla follows Rando Yaguchi (Hiroki Hasegawa), a young Cabinet Secretary in the Japanese government who finds himself at the center of the greatest struggle of his life when an enormous and unknown beast (yes, this is a full-on reboot) makes landfall in Tokyo Bay and sets forth on a path of destruction. Yaguchi leads a special task force to research ways to combat the increasingly more powerful monster, all the while hindered Government Red Tape. And that’s what sets this Godzilla film apart from the rest of the films in the series: its almost entirely from the perspective of politicians. This mostly works to the films benefit. By focusing on the central Japanese Government, we get the drama that comes with constantly trying to see the big picture with limited information, a point hit home by the juxtaposition of sterile office scenes with the destruction going on outside. Anno also uses this as an opportunity to get on his anti-bureaucracy soapbox  and satirize some recent government reactions to the 3-11 earthquake and Fukushima. I can’t say I am versed enough in Japanese politics to get every reference or even that I agree with Anno on everything, but his film has a distinct  voice of its own.

Anno’s signature is everywhere in the film, from his familiar quick-cut editing, which pushes the movie forward at a great pace, to using sound effects and even several versions of  a piece of music from Evangelion. But even if you aren’t familiar with the director’s body of work Shin Godzilla nails the technical parts of film making. The camera work is stellar. Every shot is interesting and creative. The soundtrack is nothing short of alchemic. Shiro Sagisu blends his original score with the 1954 Akira Ifukube score flawlessly and, as mentioned above, even uses tracks from his previous works, such as Evangelion.

The cast are all great. Hiroki Hasegawa and Satomi Ishihara especially stand out, since the last movies I saw them in were the abortive Attack on Titan films. (As Shikishima and Hans/Hanji respectively) Hasegawa is a strong actor when given a good script and here, you really feel for him as his character does what he can to save Tokyo. Ishihara on the other hand is very charismatic and, speaking as someone with several Japanese friends, her English is excellent, but her accent not so much. We are supposed to believe she is the daughter of a US Senator and that English is her first language, but her accent and discomfort with the words she’s saying make that aspect of her character ring false. Despite this, the performances are still outstanding. 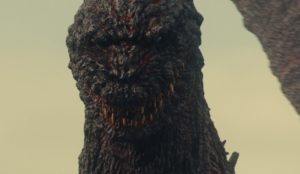 Last but not least, lets look at the big G himself. This version of Godzilla could not be any more different from the 2014 American version. This monster isn’t acting on intelligence, but rather an instinct that keeps it moving constantly forward. Anything that gets in its way, it violently destroys. If it encounters a new threat, it quickly develops countermeasures in a sort of instant and constant evolution. I’m sure this will be a sticking point for Godzilla purists, as this Godzilla actually goes through several metamorphoses over the course of the film. The creature’s earlier forms are imposing and disgusting, especially the blood-spurting first form that makes landfall, but they don’t compare to the final form.

We’ve been seeing pictures of how this Godzilla was going to look long before the films release, but I’m still happy to report the design worked very well. The burned appearance is made all the more haunting by the red glow underneath its scales. Just when you think you know the extent of this creature’s powers, it unleashes a new devastating power leaving the characters, and the audience, feeling completely helpless before the might of such a beast.  If there’s anything weak about this Godzilla, its the occasionally dodgy CG. Shinji Higuchi’s visual effects work is mostly good, but there are some very weak shots, that can sour some great moments.

And since I know some of you are wondering, this Godzilla may not get a lot of screen time, but its hard to notice since when the monster is on screen, its almost always haunting and powerful. Furthermore, since everyone is so focused on Godzilla and how to stop it, the monster feels ever-present.

Shin Godzilla is a great movie. Its a frightening and powerful film that is a must-see for kaiju fans. It is by no means perfect. Some people may find themselves bored by the political scenes, I could see this happening especially with children. Younger kids may even find the monster to be too scary. But my biggest disappointment is that the US screenings of the film are so limited. While the release is supposed  to go from October 11-18th 2016, most theaters are only showing it for three of those days, and only once per day. Seeing this film on a big screen was such a treat and I’m glad I was able to do so. That said, if you like Godzilla and if you would like to see a scary Godzilla movie again, this is a must see. Toho and Anno should be proud of the job they did bringing the monster home.