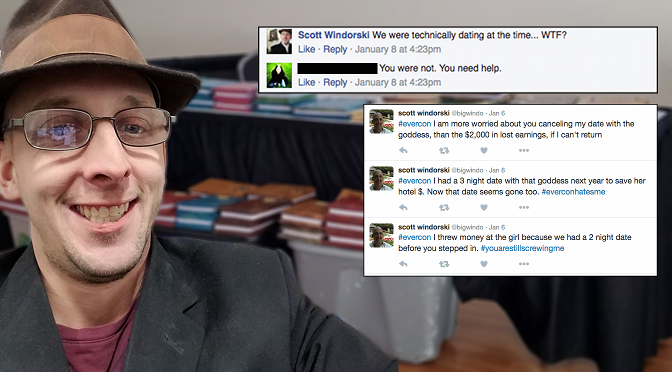 This last weekend was the 17th Evercon, one of Wisconsin’s most established small gaming conventions. This was a historic year for Evercon — It was its first year not only as a three day con, but also the first year it wasn’t held at the DC Everest Middle School in Wausau. For the most part, the move to Central Wisconsin Convention Center was very successful, save for a bizarre and extended incident.

Artist Scott Windorski, who vends under the name “Knotty Cobbler,” was ostensibly there to sell his wares, but began to make the rounds a few hours into the first day of the con, January 6th. As he did so, Windorski apparently began to interact with the other (mostly women) artists. For some, like Bal Flanagan, Windorski was at their booth to not only push his own wares aggressively, but made unwelcome comments that “made everyone uncomfortable.”

For others, the line was crossed even further.

Windorski approached artist Brittany Smith (who previously vended as part of PinStripes Studio and currently sells as AcuteCastle). Smith had sold art to Windorski at a previous event and he was initially very complimentary of her work and asked for a picture with her. However, as Smith posted to the Artist Alley Network International Facebook group, Windorski followed up questions about the artist’s eczema by telling her “I would love to see you naked.”

Smith immediately put Windorski in his place, telling him that she was uncomfortable and asked him to leave. Windorski briefly did, but not long afterward he returned. Rather than announcing himself, Windorski actually threw three one dollar bills at Smith’s face.

Smith told Nerd & Tie “I did my best to stay as professional as I could. I decided to use my experience with children to get me through the situation.” After being scolded again, Windorski took the money back and politely handed it back to Smith, but still didn’t leave the table. At one point during this, Windorski even took a picture of Smith without her knowledge and shared it publicly on social media with claims that she wanted to date him. 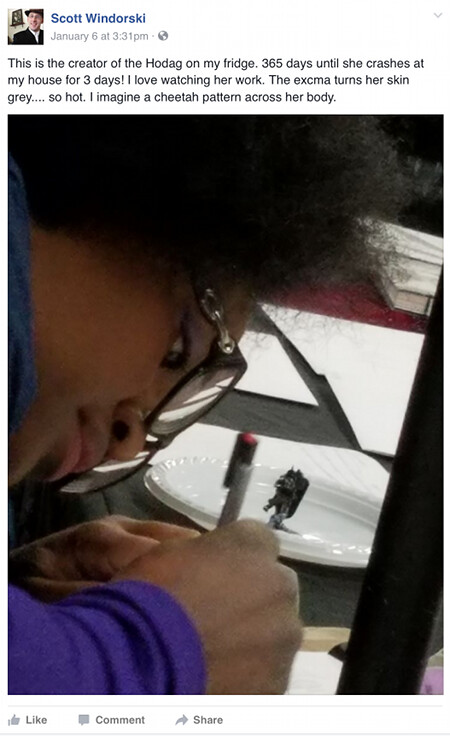 Now actively fearful, Smith found an excuse to leave her table sought out the head of security, Brett (who has asked that we not share his last name for the safety of his family). Around the same time, another artist who had been harassed by Windorski reported his predatory behavior to Evercon’s Organizers. Brett took no time in reacting. Windorski was immediately kicked out and banned from Evercon. “We have a zero tolerance policy here,” Brett told Nerd & Tie.

And really that should have been the end of it.

Late into that night and into the early hours of January 7th, Windorski took to social media not only to complain about being kicked out, but to continue to claim he had a date with Smith. 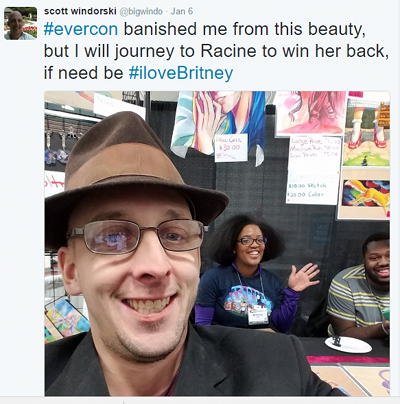 He sent similar private messages to Smith on Tumblr, claiming he wanted to see her again and that he was going to sue Evercon. Smith told the staff about the messages immediately.  Later that morning he did try to get into the Convention Center again and the police were involved, but not in the way Windorski had anticipated. The security staff did not allow him into the building and Rothschild PD escorted him off of the premises.

It was not long after that he returned to both Facebook and Twitter to make conspiratorial accusations. 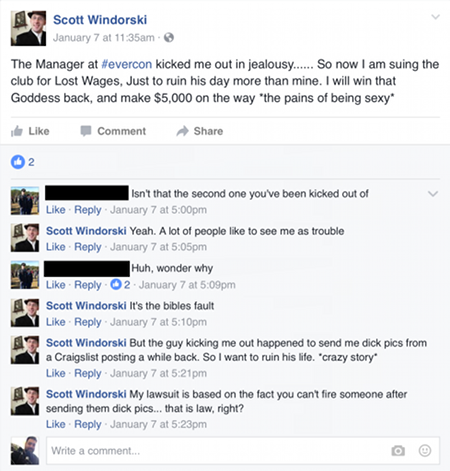 The focus soon turned to Brett, whose name he did not (and still does not) seem to know, but was a very distinctive person on staff due to his wearing a kilt. Windorski alleged that the real reason he had been kicked was because Brett had sent him “dick pics” previously.

These baseless accusations culminated in Windorski posting not one but two different Craig’s List attacks on the con staffer, featuring the same picture of a man in a utility kilt who is not only not Brett, but also not anyone from the Evercon staff. When we last spoke to Brett, on Sunday the 8th, he was aware of the listing and had already been in contact with his lawyer. It is because of this that he asked that we not post his name.  “My kids are at this con,” he told me. “My first thought was if the people I’m responsible for are safe.”

(Editors Note: We asked Windorski to provide evidence of these allegations, and received the reply “I am not linking you to that email. Not you freaks.”)

Evercon itself continued to be a safe place for the rest of the weekend. The staff were very professional and were exemplary. Scott Windorski is banned from the con and will not be welcomed back again.

Windorski has continued to post on and off about the harassment on his still public social media feeds. This has included more accusations and justifications in addition to actually admitting he said he wanted to see Smith naked in the first place.

In the event he would try to sue Evercon, Windowski would have no ground to stand on. The Evercon Attendee policy clearly states that harassment is grounds for expulsion with no refunds.

Despite this incredibly unusual sequence of events, I cannot emphasize enough how professional the Evercon staff was. Aside from handling the problem quickly and discreetly, they also made sure that Smith was kept informed of any updates in the situation. Evercon itself went off without a hitch after Windorski was expelled.  The attendees who felt victimized should also be praised for their willingness to come forward right away. It’s very easy to let things like this slide in the name of “not creating drama,” but when real problems exist, they need to be addressed.

We here at Nerd & Tie would like to remind you all that your safety always comes first, and that it is never okay to let things slide. If you ever feel unsafe at a con, report it to the staff immediately.

Together we can make the con scene a safer place.

Update (1/28): Evercon is now attempting to get a Restraining Order against Windorski