For reasons beyond me, talking to the public seems to be beyond the skill set of a surprisingly high number of convention runners. I swear, every year I end up writing a couple of posts about some con being incredibly rude to potential customers or mass deleting negative comments… it just keeps happening.

And yes, this is one of those stories.

Outlaw Comicon is a first year event that won’t be held until 2018 in Phoenix, AZ. I’d tell you exactly where, but the con hasn’t actually announced a venue yet (despite having dates). I mean, that’s weird enough, right?

Anyhow, despite not having a venue, the convention has started selling tickets already along with exhibitor and artist booth space. That exhibitor and artist space is what brought this con to our attention originally though, because despite being a first year con with no guaranteed attendance, the booths are priced… rather high. 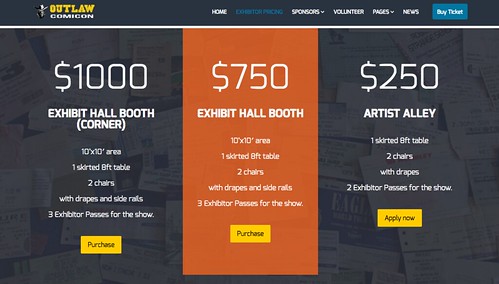 Again — organizers who don’t have a venue yet.

(Update 1/18: It should be noted that since press time, these prices have been altered. We continue to include them because those are the prices vendors complained about. Show runner Mike Wheeler also now claims that the site was not meant to be publicly visible, though it was clearly linked from the convention’s social media, guests were being announced, and the show was being promoted. The original article continues below)

Needless to say, people began to complain about the pricing. I mean, if you were a vendor or artist, why wouldn’t you? Convention owner Mike Wheeler wasn’t too happy about it though, and took to Facebook (in a now deleted post) last week: 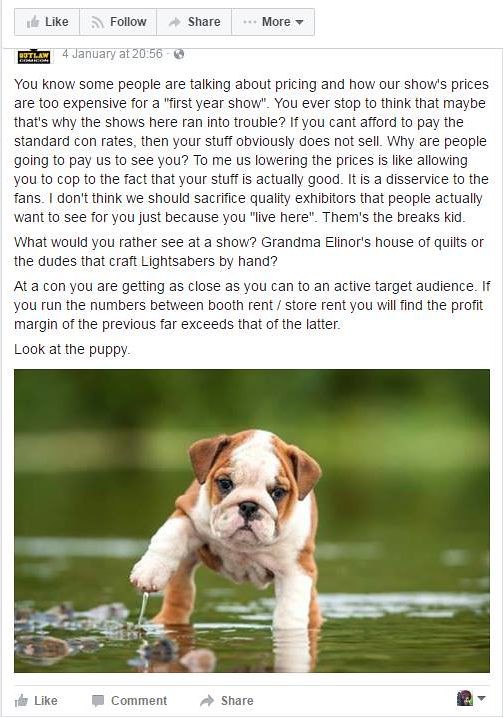 Needless to say, criticizing experienced vendors for expecting your con to better reflect the market price of other first year events did not go over well with a lot of people. People began to respond to the post negatively, again pointing out that these are prices associated with cons with 20-40k attendance numbers (and not first year shows with zero history). The post began to make the rounds on vendor and artist Facebook groups as well, which drew more and more attention to the show (as the vendor and artists communities actually talk to each other).

Initially Wheeler responded to these comments, but after a while he started to delete and ban pretty much any person who dared complain.

To make matters worse, late last night Wheeler made an additional post to the page (which he has also deleted now): 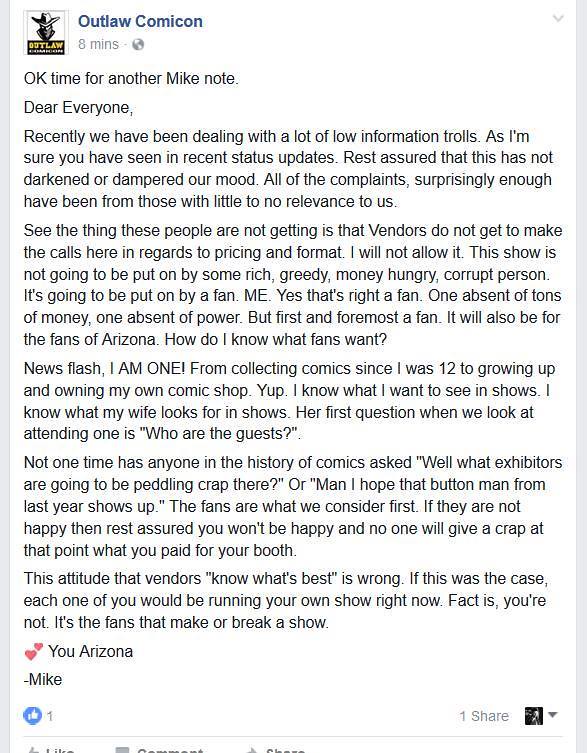 Besides the fact that there are plenty of attendees who care solely about what vendors are at a show, it just smacked of the tone deaf misunderstanding Mr. Wheeler seems to have about his relationship as a con runner with his customers. While everyone knows attendees are your customers as a show runner, so are vendors. If your customers are telling you your prices are too high, whether you agree or not, it’s usually best to listen to them at some point. It’s your job as a con runner to explain the high price, not insult your customer for balking at it.

And, frankly, it’s hard to take someone charging up to $1000 for a booth at a first year con (which has not booked a venue) seriously when they say they aren’t “money grubbing.”

At some point Wheeler must have come to his senses (or the firm he hired to help manage his social media about a week ago must have finally started yelling at him), because he deleted these posts, and replaced it with this (Update: This post seems to have been deleted now):

They’ve also begun to unban people that Wheeler had kicked from the page in his overzealousness. Wheeler also attempted to defend himself in a thread discussing his antics in the Rate that Comic Con Facebook group: 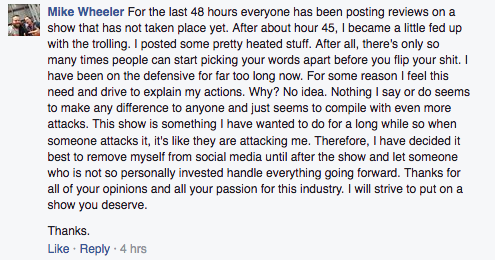 Here’s the thing though – these are prices he is currently accepting money for on the convention’s website. Any talk about them not being “final” doesn’t matter when he’s currently set up payment forms for them. If a naive buyer who doesn’t know this show is a first year purchases one of these tables at the listed price, I doubt they’ll be happy if they go down later.

And Wheeler’s excuse that he only went too far in the last few hours makes zero sense on the timeline, when you consider that the post that angered people in the first place was made Wednesday of last week.

Ironically, this isn’t even why we were going to write a piece on Outlaw Comicon to start with. You see, what brought this to our attention was a completely unrelated bit of ridiculousness on Outlaw Comicon’s facebook page. Namely, we were shocked by this post regarding artist Jim Lee. 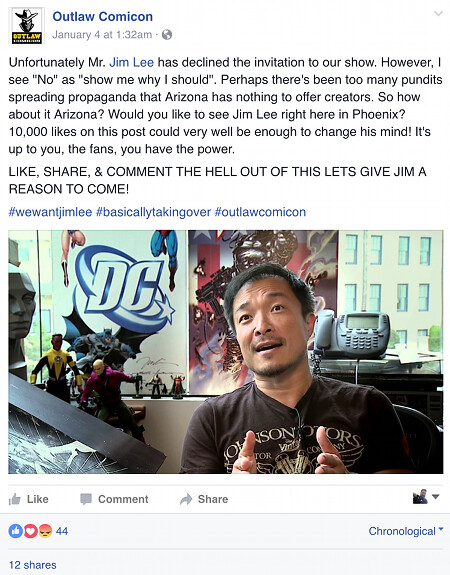 There are some things you never ever ever do as a convention organizer, and one of them is publicly outing a guest for saying no to an invite. Another thing you never do is tell your events potential attendees to bug the guest until he says yes.

No means no, and you move on. Frankly, this is exactly how you get your show blacklisted.

What all of this tells me is that Mike Wheeler doesn’t have the first clue as to what he’s doing as a show runner. I mean, one of the biggest things you never do is announce dates without a venue, and he started out by doing that before any of the shenanigans started. And while he’s got, like, fourteen months to get his stuff together, if Outlaw Comicon want’s a remote chance at success he’s going to have to start getting his crap together now.

Update (1/12/16 5pm): Outlaw Comic Con has now deleted their “apology” post, and instead posted a message saying they will no longer be interacting with people on Facebook: 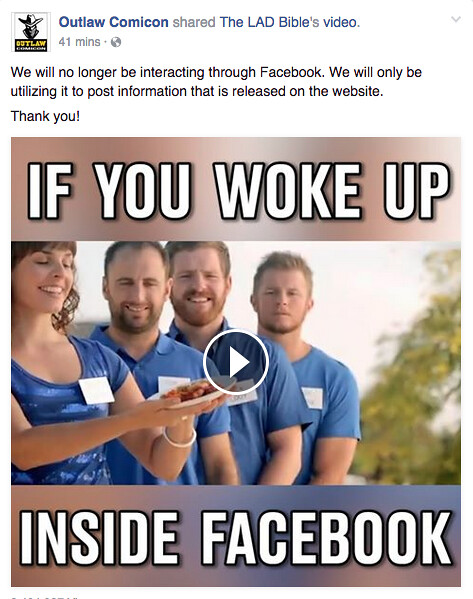 32 thoughts on “Outlaw Comicon, Failing at Social Media, and How Not to Deal With Guests”