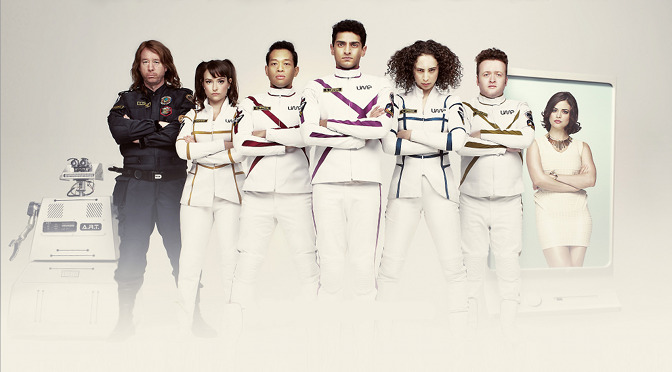 Other Space is probably one of the best science fiction comedies to be produced for American Television, and it’s definitely a strong contender for the best non-animated one. Created by Paul Feig, the show’s cast included Deadpool‘s Karan Soni, AT&T Spokesperson Milana Vayntrub, and MST3K‘s Joel Hodgson and Trace Beaulieu. It ran for one brief season on the short lived Yahoo Screen streaming series, which folded not long after it came out.

And because of that hardly anyone has ever watched it.

According to Splitsider, series creator Paul Feig wants to change that though. While Yahoo Screen may be dead in the water, as Feig’s deal had the rights revert to him, he is free to shop it around to other services. The biggest challenge though is how few people have seen the show.

Yahoo did a terrible job of marketing Other Space, only running ads on Yahoo! itself. Frankly, the only reason I ever heard of it was because I saw promotions for it while watching the sixth season of Community (the only thing anyone ever watched on Yahoo Screen). Also during the initial run the series was geolocked, so pretty much no one outside of the US has seen it.

The good news is that Feig has now had the geolocks removed, and anyone can pull the series up (for free) on the Yahoo Screen app on iOS, Android, or Roku. You can also watch it on your computer too. If you’re on Tumblr, they’ve also set up “Share Other Space” as an easy way to reblog links to episodes (and have access to a nice, simple list of episodes).

If more people watch the show, we might actually have a shot at season two.