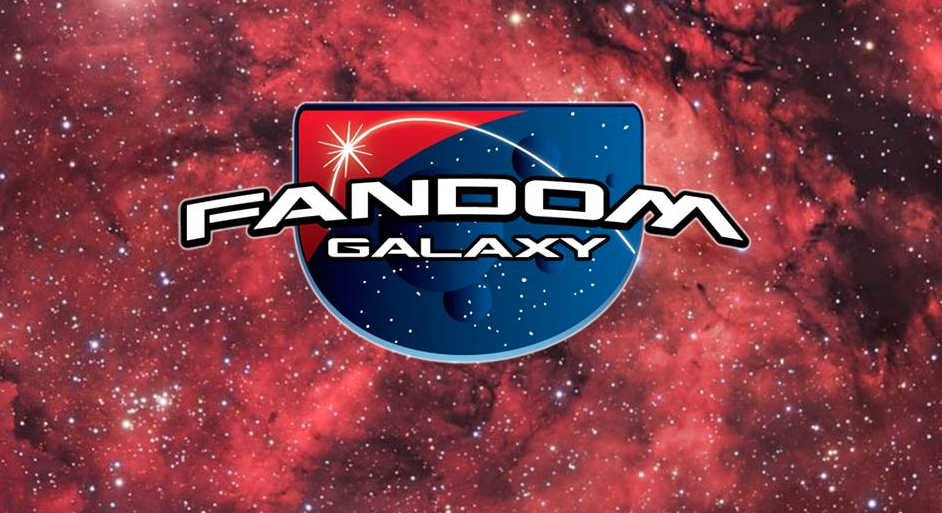 Last year was kind of a mess for Houston based Space City Comic Con. During last year’s con there were massive issues which included guests getting written bad checks, organizers calling the cops on said guests, and a whole mess of issues with VIP passes. To say that people were a bit angry at the convention and organizer George Comits would be an understatement.

It looked like the end for Space City Comic Con, and they didn’t plan a 2017 event. We thought the con would fade into fandom memory until about a month ago, when new logos started getting uploaded to the con’s social media pages. The official Twitter account and Facebook page were both renamed to “Fandom Galaxy.”

Most people assumed that this was a simple rebranding. The con had historically cycled through a few names, and there was that whole lawsuit over their old one. Frankly (for obvious reasons) it was clear that the con would want to distance itself from past bad press.

But when people started to press the issue, whoever was operating the “Fandom Galaxy” social media denied being connected to the old convention’s management. This is only puzzling because, well, they veritably are.

Fandom Galaxy went so far as to make a lengthy Facebook post earlier this week in which they explicitly claimed that they were not connected to Space City Comic Con’s promoter and were a new group from “out of state.”

Needless to say, this sounded fishy. Why would a new organization want to take over the social media of a con with this much baggage if there was no connection? People began to dig, and one member of Facebook group Rate That Comic Con went so far as to pull up Fandom Galaxy’s paperwork filed with the state of Texas. That state filing has one important detail, and that’s the name at the bottom: George Comits. 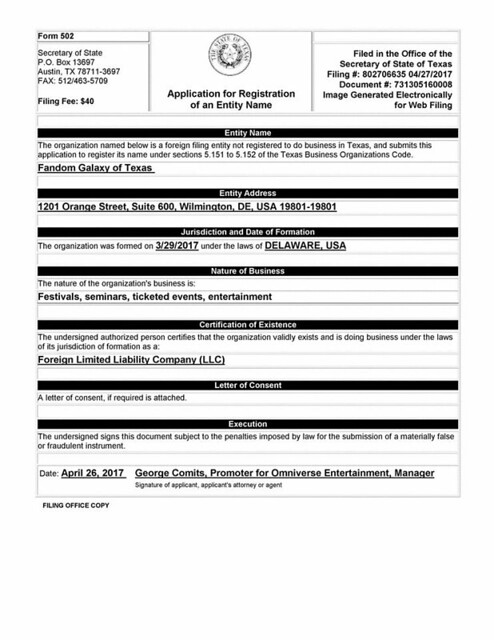 So not only is this the same group of people (or at least George Comits – who was the central driving force behind Space City Comic Con), but the “out of state” claim seems to be based around the new company being formed in Delaware. Considering how many corporations are set up in Delaware for tax purposes, this doesn’t remotely count as being “out of state.”

People were, of course, quick to post copies of the paperwork to the con’s Facebook page. The con hasn’t issued an official response, but they have since deleted their previous (knowlingly inaccurate) statement from Facebook and disabled visitor posts on the page.

What’s really happening here is that a new legal entity was formed to run the con (likely to avoid debts and legal obligations of the old company), and Comits had hoped to also avoid the negative connotations of the old con’s name. Amazingly, he might have gotten away with it longer too if he hadn’t reused Space City Comic Con’s social media for this venture. Heck, if Fandom Galaxy had just come out and said “we’re a new company, but a lot of the same people,” most of the internet outside of Texas fandom wouldn’t have cared.

But they lied, and now it’s just gotten awkward.

In the end, Fandom Galaxy is the same old con wrapped in a shiny new name, and you should pretty much expect whatever events they hypothetically end up running to be pretty similar to what Comits has run before, for better or for worse. Considering the way the new name was launched though, I’m pretty sure we can tell what direction this is going to go.

Update (5/10 1:45pm): We did hear back from Fandom Galaxy’s management. When pushed about George Comits’s involvement, they responded:

He’s an employee. He had to be, because Facebook pages cannot be sold. Also, he has congestive heart failure and if there was an event, we wanted to know the vendors, network etc from his advice. He’s admitted his mistakes to us, but he’s also told us the real version of events – which include the theft of the entire cash office receipts by [REDACTED]

We’ve redacted the name of the person Fandom Galaxy claims stole from the event, as we have no evidence to back it up. We asked Fandom Galaxy for proof, and even though they offered a lengthy explanation we have not had a chance to verify it yet.