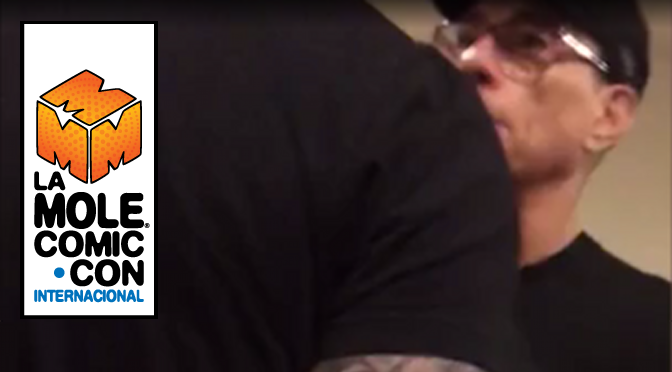 In what can best be described as “a massive headache for a convention’s guest relations staff,” Jason David Frank and Jean-Claude Van Damme reportedly came to blows at La Mole Comic Con in Mexico this last weekend. According to The Blast, Frank was asked by Van Damme to do a joint photo. As the two have been notoriously feuding for years, Frank apparently thought Van Damme wanted to bury the hatchet.

This wasn’t so much the case.

When Frank arrived at the green room, he found a hostile Van Damme. As The Blast reports:

That’s when the Power Ranger says he realized it was “all a setup.” Frank tells us JC approached him with cameras rolling and demanded Frank apologize for calling him out in 2010 and said if he wanted a fight, “Let’s throw down.”

Tension seemed to rise (as the cellphone video posted by The Blast shows), and you pretty much end up with two guys who have way too much invested in their masculinity and egos getting in each other’s faces.

So, as you’d expect – a minor altercation apparently broke out… in a spectacularly anticlimactic way:

Van Damme and Frank both agreed to an MMA-style brawl and the Power Ranger grabbed the action star and put him in a headlock against the wall.

It was over before it even started — Frank says Van Damme froze up, seemingly surprised Frank was actually trying to fight him.

We’re told they argued back and forth for a few more minutes and, eventually, security stepped in and broke it up.

So yeah – it’s about as exciting as you’d expect a tussle between a B-movie star and Power Ranger to be. Frank, of course, played it up on his Facebook page:

I guess the takeaway though from all of this is if you’re running a con, maybe don’t invite both of these guys? It doesn’t seem like it’s worth the insurance hassle. Heck, maybe just avoid them both until at least one of them learns to walk away from the kinds of fights most of us stopped getting involved in while in third grade.

Via The Blast (by way of The Beat)