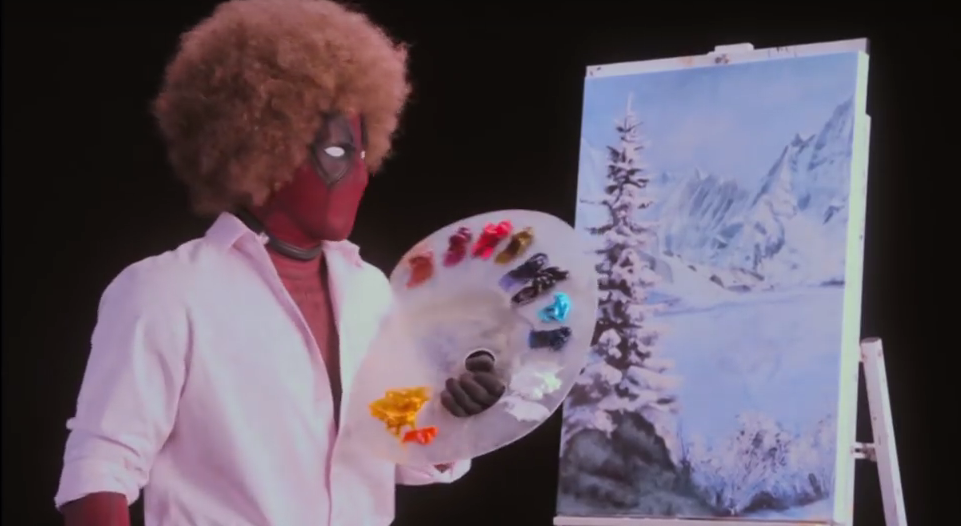 We took a few days off (since we all went to Daisho Con this last weekend) so we missed a few things last week. One of the big ones was the new teaser for Deadpool 2. There’s a montage of new footage and images in it, but it’s embedded in the middle of a rather on-point Bob Ross spoof.

Personally I think it’s pretty funny, and probably the most Deadpool-like way to promote the movie. The first film had some pretty creative marketing too – though that time around it was because the movie mostly had the freedom to do whatever it wanted (as it was a low priority for Fox). As Deadpool was a remarkably successful film though, his time around they know that stuff worked… so we should expect to see a lot more.

Even the Youtube description for this video isn’t exactly taking this seriously:

After surviving a near fatal bovine attack, a disfigured cafeteria chef (Wade Wilson) struggles to fulfill his dream of becoming Mayberry’s hottest bartender while also learning to cope with his lost sense of taste. Searching to regain his spice for life, as well as a flux capacitor, Wade must battle ninjas, the yakuza, and a pack of sexually aggressive canines, as he journeys around the world to discover the importance of family, friendship, and flavor – finding a new taste for adventure and earning the coveted coffee mug title of World’s Best Lover.