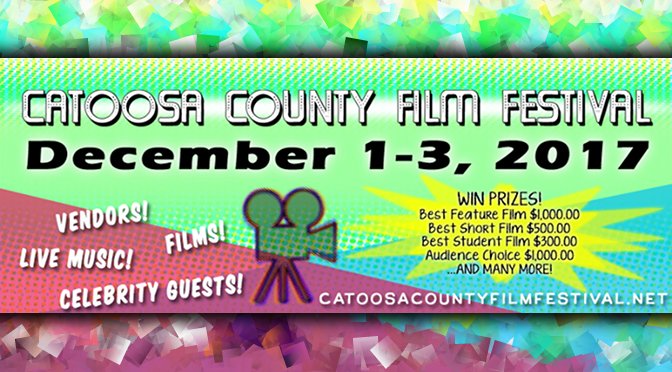 This last weekend was the scheduled dates of Georgia’s inaugural Catoosa County Film Festival. Founded by Edwin Morgan III and “co-hosted” by Christine Millraney and Kevin Sexton, the guest list included Samantha Newark, G. Larry Butler, a number of Horror film actors, and enough minor characters and extras from The Walking Dead to choke a horse.

And as far as we can tell, things went terribly.

Originally the event was supposed to take place at The Colonnade Center (which is still listed on the official website), but on Friday, just hours before it was supposed to begin, there was an abrupt change in venue. The announcement went out on their official Facebook page: 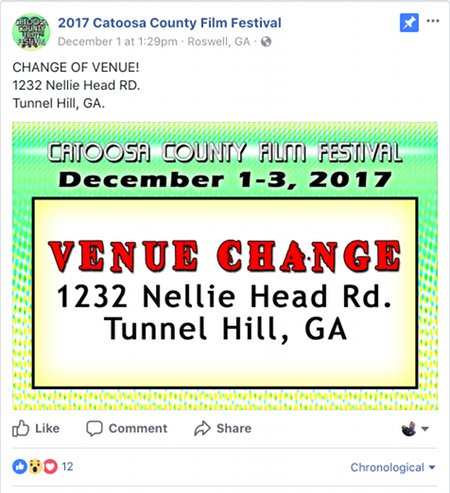 That new venue was Queen’s Chestnut Barn, a… well… barn. I mean, it’s a nice barn that’s often rented for weddings, but it’s still a barn.

They did manage to open on Friday, but apparently shut down on Saturday afternoon — halfway through the event. Needless to say, people weren’t too happy about it, taking to the Catoosa County Film Festival Facebook to express their dissatisfaction:

As for what actually happened during that day and a half (which has since been nicknamed “BarnCon”) Actor Kent Wagner, who was appearing at the show, had some choice words which he posted to Facebook. He’s since deleted the post, but The Beat has reproduced it. We won’t copy-paste the whole thing here (click through to read the whole thing), but these were the important bits:

This cat, show promoter, Edwin Morgan III set this whole thing up. One cat to blame on the failure of the show is this guy. He bailed. On dozens of people. Reputable names like Sid Haig, Linnea Quigley, Michael Berryman, James Duval, R.A MiHailoff and several others. Personally, this pisses me off. Especially with Sid, don’t fuck with Sid. Complete bullshit. In the end no one got their hotel rooms, travel expenses, guarantee or catered food etc as promised.

They, all of them, paraded around like they were some hot shit.

So yeah, that sounds like a pretty terrible time.

With unpaid guests and getting booted from two venues in less than two days, it’s obvious their were financial challenges for the event. In researching this story, we found a Kickstarter for the event from November that raised $0 of a hoped for $55,000. We don’t know if the Kickstarter was ever publicly shared, but it’s clear they were hard up for money to even consider that so close to the festival. 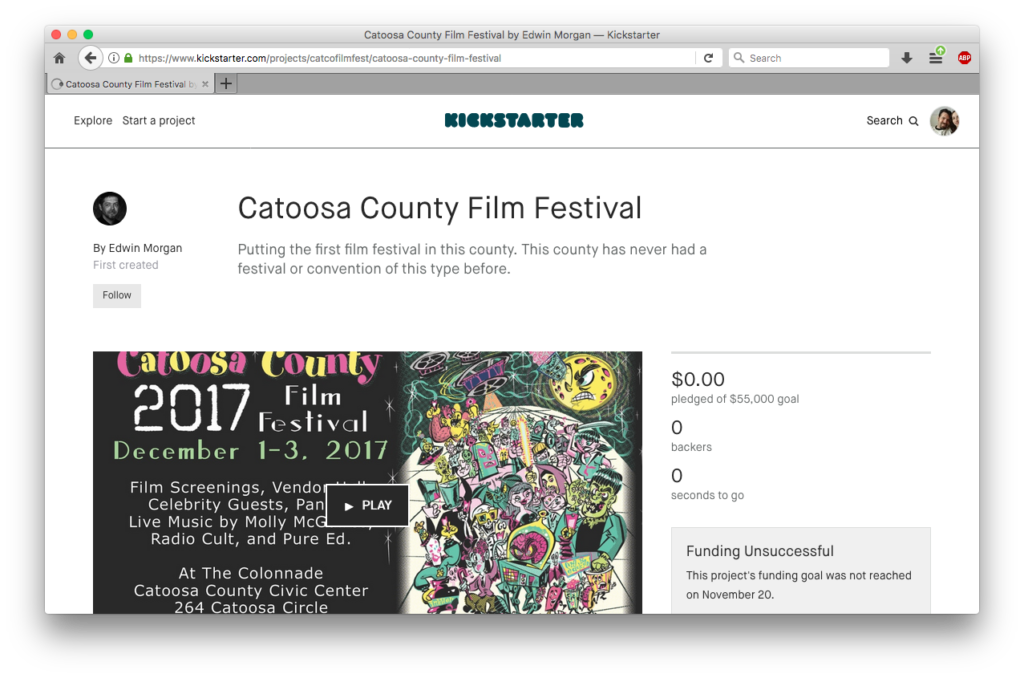 We reached out to Catoosa County Film Festival via their Facebook page on Wednesday morning, and while we know they read the message, we never received a response. Of course, I don’t think we’re going to get one, since as of today the Facebook page seems to have been deleted.

That’s probably the first unsurprising thing to happen in this whole mess.