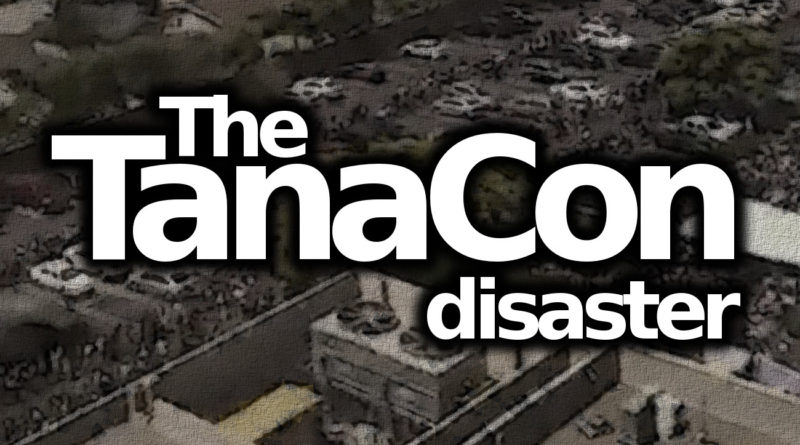 This last weekend was kind of a bonanza of weird convention issues and failures. SoonerCon made vendors pay estimated sales tax in Oklahoma before the show floor closed. From all reports it seems like the much hyped Sacramento Fandemic show was poorly attended. In Orillia, Ontario, Cottage CountryCon didn’t fare much better. None of those were the biggest disaster, though.

That title goes to TanaCon.

TanaCon was an event put together by Youtuber Tana Mongeau and a production company called Good Times Entertainment. It was set up in just two months, after Mongeau posted a video in April explaining why she would no longer be attending the Anaheim, CA based VidCon.

VidCon would, of course, be the the massive Youtube creator convention originally founded by John and Hank Green, and currently operated by Viacom. It draws over 30,000 attendees annually. The long and the short of the situation is that Mongeau had attended several times, but was frustrated at not having been a “featured creator” along with what she believed was poor treatment from event security.

TanaCon was scheduled to take place pretty much across the street from VidCon at the Anaheim Marriot Suites. Besides Mongeau, the event advertised appearances by well known Youtubers including Shane Dawson, Bella Thorne, and Casey Neistat. Tickets were sold online at two tiers, a “free” pass (which actually cost $1) and a $65 VIP pass. According to Mongeau and Good Times Entertainment, about 5,000 tickets were sold for the event.

Now if you’re thinking “two months is a really short amount of time to conceive a con and launch it,” you’re right — it’s an incredibly short amount of time to build enough of an organization to handle a crowd of thousands. What may not be quite as obvious though is how ill suited a venue Mongeau and Good Times chose for the event too. You see, those 5,000 attendees were showing up to a hotel that was designed to hold 3,000 people at best for an event mostly contained within a ballroom with a maximum capacity of 1,150.

Needless to say, the math doesn’t work out so great.

On June 22nd, thousands of TanaCon attendees lined up in the hotel’s parking lot. Apparently the plan was to rotate attendees in and out of the building, but most attendees ended up standing outside in the sun with little to no water available. Once in the building, VIP guests found that the giftbag their $65 pass paid for apparently just included a branded condom, a smart phone grip, and a wristband.

The event itself seemed to have had no programming planned, leaving the attendees milling about with little to do. Organizers apparently had planned to move people in and out of the building, to allow everyone in — but some attendees ended up in the sun for over four hours, and attendees in the building didn’t exactly want to go back outside.

I wasted 150 dollars on #tanacon , it’s one hallway, one big concert room, and no activities. No creators are walking around like promised. We stood outside for 4 hours, just to be treated like animals. pic.twitter.com/WlgiSvHqFs

People were getting sun burned and some of the attendees began to get unruly out of frustration. Eventually the Marriott’s staff ended up calling the police, the event was shut down, and the crowd of approximately 5,000 attendees was dispersed. With the con shut down, organizers eventually ended up calling off the second day of the event.

Of course, that’s where some strangeness comes in.

Mongeau ended up going online, and while she was very apologetic, she told a slightly different story to the public. The Youtuber claimed that the event was instead being shut down by the Fire Marshall, and that instead of five thousand attendees… twenty thousand had shown up.

bella and i r coming out to talk to everyone!! everything is fine just fire marshall stuff keeping it safe. adding a third day or if worst comes to worse i would be down to personally refund anyone still upset!!! no one expected 20,000 people my loves. i love u!

100% it's my first convention and obviously we aren't ran by a giant corporation and NO ONE EXPECTED 15,000 unticketed guests to show up and rush!!! however meeting u guys all day & the wedding and stuff was so fucking incredible. i love u!!!!!

The 20,000 number got spread around so much, that the Garden Grove Police Department ended up having to put out a press release to dispute it.

I mean, I’m honestly not exactly sure what’s going on with that number. It’s clear from the available photos and videos that the crowd is nowhere near 20,000. As mentioned earlier, VidCon, an established event which is considered to be the biggest convention for online video creators in the United States, draws around 30,000. To believe what is, effectively, a tiny “spite con” was drawing two thirds of that? It’s honestly a massive stretch.

Not to mention, for those of us who follow the convention scene, it puts TanaCon on the pile of “twenty thousand attendee” estimates that keep weirdly popping up.

What this really looks like is a deflection — to try and make it seem like the event was unexpectedly overcrowded. But 5,000 is literally the number of people they claimed they planning for, and Mongeau and Good Times Entertainment completely dropped the ball. To pretend that more people showed up to make themselves look sympathetic is frankly, pretty shady. In a long list of screw ups and mismanagement, it might be the thing that bothers me the most.

Nah, it’s totally the forcing largely teenage crowd to stand in the heat and sun for over four hours without adequate water.