A week ago Anime News Network reported on allegations of harassment against long time AnimeNEXT staffer and former member of its board Eric Torgersen. Back in March, a woman named Anne May posted the a detailed account of her experiences in 2015 with Torgersen to the public AnimeNEXT Facebook Group: 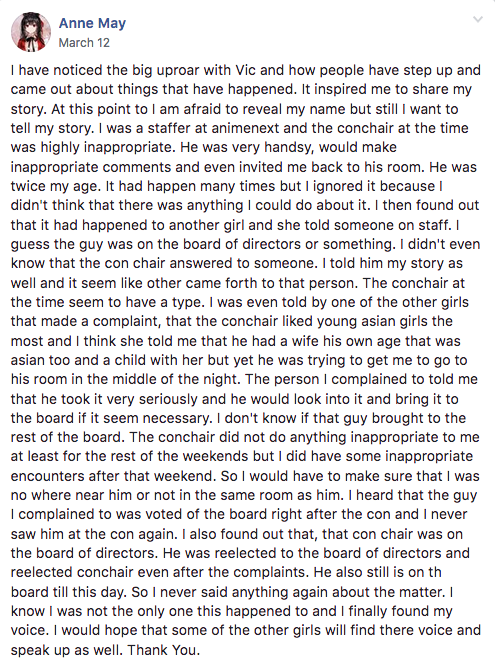 Anime News Network’s Lynzee Loveridge investigated the claims against Torgersen and reached out to AnimeNEXT staff. In the piece she reported:

The allegations by Anne May and other women were shared with AnimeNEXT’s head of HR and board of directors member at the time, Carlo Darcelin. Darcelin had been involved with the convention in some capacity since its inception but would leave following con’s 2015 show. Darcelin said that 2015 was the first time he’d heard allegations against Torgerson.

“It all started with one complaint that I was told while I was working the green room. A girl mentioned that she was having a problem with Eric but put in a joking manner. At first it didn’t sound like she was serious but then I got the feeling that it was true. So I asked her directly. She said ‘it is true and has been going on since the previous year.’ She thought because he is the con chair that there was no one that she could complain to. I let her know that I am on the BOD [board of directors] and that Eric answers to the BOD. So I urged her to tell me everything that happened and I would bring it up to the board. It just happen that another staffer heard us talking and said that Eric had done the same to her. Then, as if I opened a flood gate, many women came to me with their stories or stories of Eric doing this to other people,” Darcelin said.

He described the complaints as inappropriate speech, unwanted touching, inviting women under the age of 21 to drink in his room at night, or generally making women feel uncomfortable. The women involved were predominately Asian.

These incidents eventually made their way to AnimeNEXT’s board, where a meeting was held without Torgersen. Unfortunately, at the time, it was decided to merely give Torgersen a warning. According to ANN, Torgersen allegedly continued to act inappropriately though, and allowed his “BDSM-like” personal relationship with two women to bleed into his professional work.

Honestly, it’s a lot, and you should definitely read the entirety of the ANN piece.

Even though its been months since May’s public accusation, the ANN piece may have finally struck a nerve. AnimeNEXT staff took to Facebook yesterday and has now released the following official statement on their page:

While it is nice to see the event finally taking action, it’s disappointing that it took four years after the harassment was first reported to the event’s staff for AnimeNEXT to do something. As we’ve reported on other harassment incidents, a common call from a certain element always jeers that people shouldn’t take to social media and that you should just report things through official channels — but here’s a case where someone did report.

And nothing happened until they shared their story on social media.