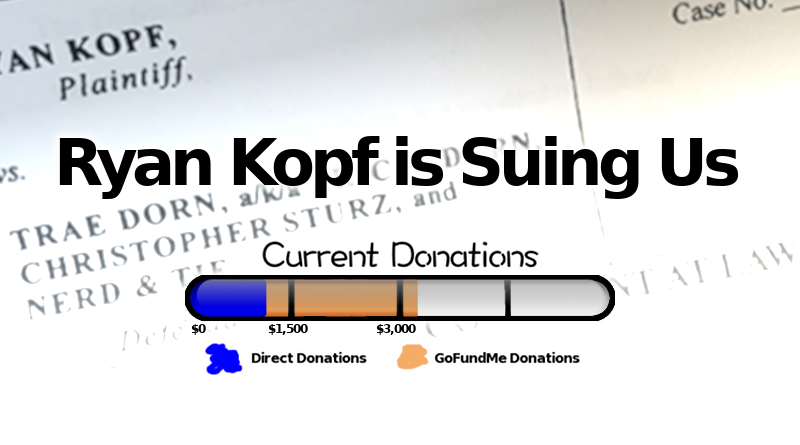 Hi, I’m Trae Dorn, and I run Nerd & Tie. Besides our podcasts, this site has always had a focus on convention news. In our earlier years I published a few stories about Convention organizer Ryan Kopf (who runs multiple events in the Midwest and is involved in a few others) which weren’t all that flattering.

He filed that first suit in the state of Iowa. After adding (now former) Nerd & Tie contributor Pher Sturz to that lawsuit, we successfully got it dismissed on jurisdictional grounds. Rather than let the bad PR die down though, he decided to refile the case in Illinois at the end of June 2016 (and yes this is still ongoing in 2021).

I stand behind the articles I wrote (and you can find links to the articles along with a link to the petition Kopf filed in the “Long Version”), but mounting a legal defense is expensive, so I’m attempting to raise funds to pay for it.

Any help would be appreciated.

The Long Version (with links):

We do a lot of stuff at Nerd & Tie . We produce multiple podcasts, briefly ran a convention, and provide in-depth coverage of the con scene. That last bit is one of the things we’re most proud of, but is also what’s led to some of our biggest headaches.

As those of you who follow this site may be aware, for the first half of 2016 I found myself fighting a lawsuit AnimeCon.org/Chrono LC CEO Ryan Kopf filed against me in the state of Iowa. It was over some of the coverage of his events I’ve written over the last couple of years (mostly these two articles). You can read the original Iowa petition here: [ Page 1  / 2 / 3 / 4 / 5 / 6 ]. He later amended the suit to include Nerd & Tie podcast co-creator and (now former) contributor Pher Sturz, and you can read the amended version of the Iowa petition here.

It should be noted that Pher was added to that suit solely because of posts made on his personal Facebook page in support of me.

Eventually things ended, with the case against myself and Pher Sturz being dismissed on jurisdictional grounds, and thankfully our legal fees with that first case were covered thanks to donations from our readers and listeners. We had hoped that would be the end of this situation, but unfortunately rather than take the minor PR hit and move on, Mr. Kopf has decided to keep this going.

In mid-2016 both Pher Sturz and I were served once again.

You see, Ryan Kopf has had his attorneys refile the case in the state of Illinois in late June of 2016. You can read the original Illinois petition (2016-M3-003898) here. In November of 2016 an amended version of that petition was later filed. Pher and I are both named, along with Nerd & Tie itself (although that last bit is less important as Nerd & Tie is not its own legal entity — as I am the sole legal owner of the site).

The lawsuit has dragged on for multiple years though, and we don’t see the end in sight any time soon.

For more, feel free to browse our Ryan Kopf tag on the website for more detailed information.

While there have been occasional updates along the way, lawsuits can take a long time. The suit is currently ongoing, and we could really use your help.

How Can I Help?

Unfortunately, legal fees and lawyers are not exactly cheap, and we expect costs to be much higher this time around. So while we hate to do it, we’re asking for your help again.

All the funds we raise will go towards paying our lawyer and covering legal fees. We’re asking for a lot right now, and we may need more down the road. I know it’s a lot of money, but this lawsuit has frankly been running for years at this point.

Honestly we appreciate any help you can give us.If you’re interested in donating to help pay our legal fees, we have a GoFundMe setup. This is the best way you can help us right now if you’re in a position to donate.

While we’ve accepted direct donations before, at this time we don’t have a mechanism to do so. If you want to reach out in other ways, you can always email Nerd & Tie at our general email box tips@nerdandtie.com. Frankly, just letting people know that this is happening to us and getting the word out about this situation helps too.