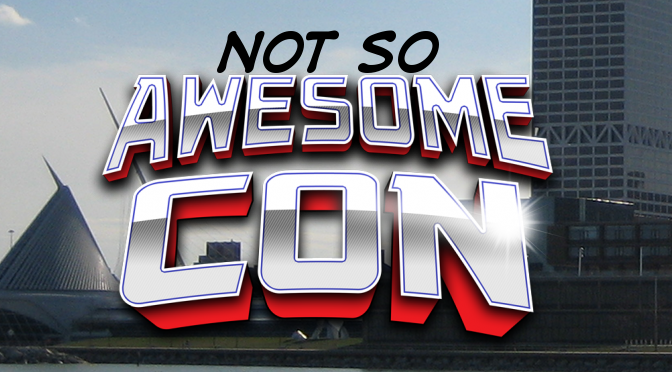 Note: Does Trae sound like a dick in this article? He sure thinks he did. We’re leaving it intact, but please be aware — we at Nerd & Tie all think we were being a bit unfair on this.

A version of this first appeared on Trae’s personal blog.

So as many of you know, I primarily do conventions in two areas: Indiana (where I live) and Wisconsin (where I’m from). I’ve just recently gotten started at expanding into more Indiana events, but it would be an understatement to say I’m highly involved with cons in Wisconsin.

Mostly because I co-founded one of the older, still running ones.

Those of you who have read my blog over the years may have also noted I have a pretty specific philosophy when it comes to how people and organizations in the con scene should interact. I think cons should try to work together cooperatively rather than competitively, as a rising tide can lift all boats if we do it right. I hold everyone to a pretty high standard, and I view what we’re doing in building communities amongst those who haven’t so easily been accepted in society at large as kind of important. And while I am not wholly against for-profit conventions on any sort of principle, as I believe they can be run right, I also have yet to witness that many situations where for-profit outfits don’t come into regions like a bull in a china shop.

I can get a bit preachy, I know.

And Wisconsin has been a nice little refuge, with almost an entirely non-profit, fan run con scene. Even the largest con currently in the area, Anime Milwaukee, is managed with some pretty solid principles. Sure, not everyone is perfect – and conflict happens, but overall stuff has been pretty peaceful.

Cons work together, stay away from each others weekends, and have built a community unlike anywhere else I’ve been to.

Anyway, all of that should serve as background to how I’m reacting to a very particular email I received yesterday.

An email which has me a bit angry.

Because you know that bull I mentioned earlier? It’s just driven a truck through the china shop’s front window.

Yesterday I got an email in both my personal trh@trhonline.com inbox as well as the Facebook fanpage for The Chronicles of Crosarth which read as follows:

Hi,
My name is Jess [redacted], and I am the Event coordinator for Awesome Con. We are bringing our brand of comic-con to Indianapolis and Milwaukee this fall, and I hope you will join us as an exhibitor, artist or sponsor.

If you haven’t heard of us, Awesome Con in Washington, DC is one of the largest cons on the east coast, with over 30,000 people attending our event this year. We are starting new shows in Indianapolis from October 3-5, and Milwaukee from November 21-23. We want to bring something new and exciting to these markets, and our expected attendance for each show is at least 20,000.

There are only a handful of cons in the country that advertise as aggressively as we do. We will be all over TV, radio, print, Facebook, and billboards in those respective cities. We also partner with local PR agencies to make sure the local media knows about us, and if you’ve seen some of our past coverage, we are very good at getting our shows in the news.

Please let me know if you have any questions that can’t be answered by visiting our website http://www.awesome-con.com/. Exhibitor applications can be found for Indianapolis here and Milwaukee here. Thanks, and hope to see you there!

Upon seeing how the email version was BCC’d to me, I can only assume that the “Awesome Con” staffer sent this out en masse to people who listed online that they exhibited at cons in either Wisconsin or Indiana (or both in my case). Many of us list our con appearances and dates on our websites, so that’s the only reason I can think of that I would have been contacted.

But clearly “Jess” did look closely at any of those listings.

You see, their Milwaukee dates of November 21-23 are literally the exact same dates as Daisho Con in Wisconsin Dells. Daisho Con is Wisconsin’s second largest Anime Convention, and just two and a half hours away from Milwaukee. One of my Nerd & Tie co-hosts is a cofounder of that event and it’s one of my favorite cons. This organization literally decided to come in and set up their competing event not near, but on the exact same weekend as one of the most beloved cons in the region. A con which for seven years has been on that weekend.

This is just f***ing clown shoes.

They literally are just walking into town and setting themselves up on a long established con’s weekend. With no respect for the local fans, my money is that they never even bothered looking to see if another event took place that weekend. Even if they did look, they fundamentally misunderstood the way cons work in Wisconsin. They didn’t even spend five minutes scoping the regional scene and finding out how events interacted before charging in.

To put it in more business-like terms: you need to fundamentally understand a market, even if you’re looking to disrupt it. Literally picking any other date wouldn’t have caused bad will.

Even if the difference was only a week.

Also – seriously, Indianapolis? Does Indianapolis really need another group trying to make a huge scale con? I mean, Gen Con’s been there since they left Milwaukee, sure, but just this year we’ve had two attempts of varying success in the spring (Indianapolis Comic Con, Indy Pop Con). Not to mention Wizard World is coming next year. Only Indy Pop Con is fan run out of those, and can the town really support five large scale cons?

I don’t think it can.

And that “at least 20,000” attendees number has to be a joke. Sure, Indianapolis supports Gen Con’s almost 50,000 attendees, but Indianapolis Comic Con (which was hyped for quite some time) only did about 15,000 (I say “only did” like that isn’t a really impressive number for a first year con… hah). Indy Pop Con had good numbers, but was smaller. I think the estimate I heard for that was 10,000 – but that was just in conversation. What it boils down to though is that there’s no way a new Indianapolis con hits 20,000.

I’ll eat my hat if it does.

And Milwaukee? Milwaukee is incapable of supporting an event that size. Gen Con literally left Milwaukee because the city couldn’t support it – and it only had 23,000 attendees in 2002 (its final year in the Dairy state). There is literally not enough hotel space to support Awesome Con’s projected attendance numbers.

This means one of two things: Either Awesome Con’s staff is being dishonest with how many people they think will come, or they’re incompetent. Considering how much they’re about to offend a lot of fans in Wisconsin, I’m leaning towards the latter.

Any maybe to a lot of degrees they will be – Awesome Con has more general appeal that Daisho Con, and maybe they can get five digit attendance figures right off the bat. Anime Milwaukee hasn’t been able to do that, but they don’t have the resources these guys do.

But is it good for the con scene? It depends on your point of view. I will say it will disrupt the idillic little non-profit, cooperative world we’ve built quite a bit… but it’s not like it was ever a true utopia.

It does mean that we need to fight to support the cons that brung us though. I don’t know about you, but come that weekend in November, I’ll be at Daisho Con.

I hope you’re all with me.

We’ve been contacted by Awesome Con and told that their staffer Jess (whose last name I’ve now redacted by request) has been receiving harassing emails regarding this situation. Please stop. That sort of thing helps no one.

Additional Update 7/15/2014: Pher Sturz has written a follow up piece to this, including Awesome Con’s official reaction.

45 thoughts on “‘Awesome Con’ Is Not So Awesome, Steals Established Con’s Weekend”