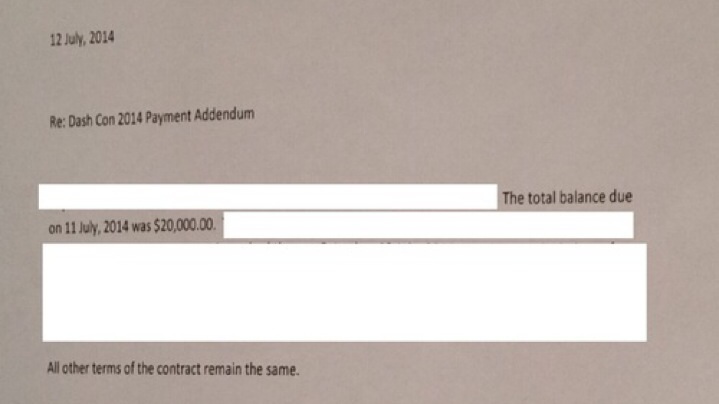 And in this case, I’m talking about DashCon. From all reports DashCon may be the most mismanaged, poorly planned event we’ve seen in quite a while.

Or at least since Kaze Con, but that’s a different story.

Well, that’s what it became. Originally it was called TumblCon USA. Which, while accurately describing the organizers desire to link the con to the website they adored, ignored that the actual company Tumblr might not want to be seen as closely linked to an event they had nothing to do with. You know, in case the convention was a disaster.

The staff of Tumblr is full of very smart people.

From the start, the convention’s organization was a mess. Reports from one person involved in the early stages indicated a culture of incompetency and disorganization. Some planners have been reported to be as young as 13.

Now I’ve been staffing conventions for quite some time (cofounding my own convention in the early 2000s), and I have long maintained that con staffs should not include people under the age of 18. There are liability issues up the wazoo, and while there are exceptions, the vast majority of people under the age of 18 are not emotionally equipped for the stress of being responsible for events of this scale.

But if only that were the worst of it.

To raise funds, then-TumblCon USA ran an Indiegogo campaign. The campaign successfully raised over $4000, but promised interesting rewards. Although the campaign ended in April of 2013, reportedly contributers still have nor received their promised rewards.

This did not bode well.

DashCon offered a preregistration price of $65. $65 is fairly high for a first year convention, but that’s what they set. Initially, for five dollars more you would also be able to attend a Steam Powered Giraffe concert, but that was cancelled long before the con happened. Did those who bought the tickets get their five dollars back? I don’t know. It’s really the least of the convention’s issues.

The guests they did book included internet audio drama sensation Welcome to Night Vale (who were scheduled to do a live show), actor Doug Jones, and comic artist and writer Noelle Stevenson.

The convention on its surface looked at the very least interesting.

And then it actually began.

On the Friday night of DashCon, staff rounded up all of the attendees. They announced that the Hotel had sprung a bill on them they didn’t expect, requiring that the space they were using for the con be paid for in full by the end of the night or the con would be kicked out of the facility. They asked the congoers to donate $17,000 to keep the doors open.

In an official statement, DashCon later explained on their Tumblr:

We worked out a plan with the hotel to give them money slowly for the entire course of the weekend, which was more than 100% feasible for us. However, 12 hours later one of our admins was unexpectedly pulled into a meeting with higher-level hotel staff, at which point they were informed that convention management had to procure $20,000 by the end of the night. It was an extremely sudden change, especially since we had sent them a number of payments before and a considerable sum the night before.

We could not have been reasonably expected to prepare for the plan to change so suddenly. This sudden change put us in a place where we would not be allowed to open on the morning of 7/12, unless we had the full amount for them the night of 7/11. Unfortunately, the money we needed to pay that amount would not have been coming in until 7/12 in the form of walk-in attendees, as is customary for conventions. Saturday is always the biggest day.

The con also posted a redacted version of a letter purportedly from the hotel demanding this: 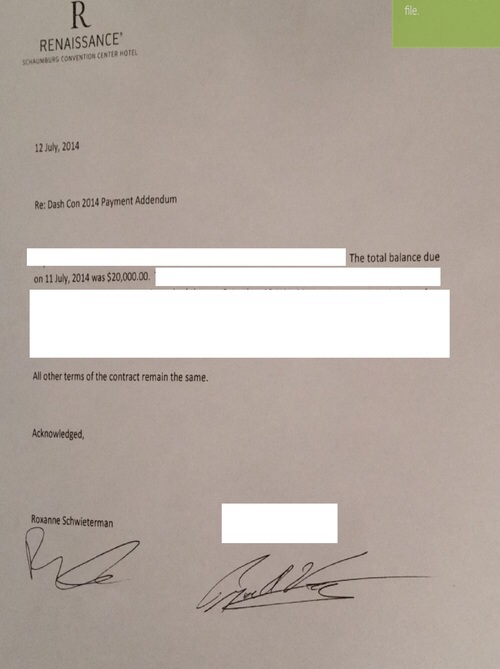 Now there are a couple of issues with this story. As I’ve said previously, I’ve spent a lot of time working and running conventions. Any time you do business with a hotel you have a very clear contract. Within that contract are specific payment terms. Whether your bill is due before or after the event is spelled out, along with any payment schedules. If you need to pay X amount by Saturday at noon and Y amount by Sunday at 2:00PM, it’s in there. This is important because it protects both the hotel and the convention. Do you know why? So a hotel can’t change their terms on Friday night of the event.

The other strange thing is the highly redacted letter. What is the point of hiding that information? Blanking out names to prevent harassment I get, the same with other specifically identifying information… but entire paragraphs of text?

The only reasonable explanation is that there was some error or mismanagement on the side of DashCon that their PR team was hoping desperately to hide.

In any case, the con raised $17,000… largely through Paypal. Since it can take days for payments to fully clear on Paypal, and that said account did not belong to the hotel, it is unclear how this helped – but organizers said it did.

And that they’d refund anyone who paid via Paypal.

And no, none of this makes sense.

In fact, the need for money is downright confusing. While it’s true attendance was significantly lower than predicted (some were claiming up to 7000 people would come), on the floor reports say that anywhere from 500-1000 attendees were there on Friday. Now let’s say that some of these people preregistered at the $65 price, while others paid either the higher at door price for a weekend badge or the lower day pass price. On average, it’s safe to guess that (conservatively) the con got $50 per attendee.

My point is, really, how were they not able to pay their bills? I’ve run conventions larger than that with a lot less money than $50,000.

Having “saved the day,” Saturday still rolled around at DashCon. The biggest feature of Saturday at DashCon was to be a live performance of Welcome to Night Vale. Attendees filled the hall with excitement, some having paid extra for priority seating. They sat down eager with anticipation.

…and then over an hour passed, with no one showing up to tell them what was happening. Eventually a DashCon staff member came out and (in the worst way possible) told the assembled DashCon attendees the Welcome to Night Vale performance was cancelled.

Think I’m kidding? I’m not. A contributer to The Geekiary documented the event:

Reportedly, those who paid for priority seating were promised “an extra hour in the ball pit.” A “ball pit” that I’ve been told was previously open to all attendees anyway. 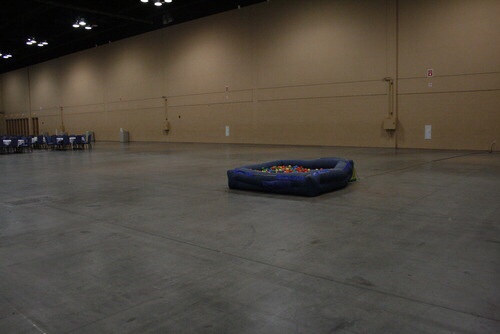 (Apologies to whoever took this picture, I can’t seem to find who you are to credit you)

Now you may be asking yourself, “Why did Welcome to Night Vale leave?” The answer is, not surprisingly, due to the mismanagement of DashCon.

You see, Welcome to Night Vale interrupted their ongoing tour to perform at DashCon. They wanted to do something for their fans, especially since the Tumblr community was largely responsible for their explosion in fame a year ago. DashCon was supposed to pay for the Welcome to Night Vale crew’s flights to Chicago and hotel bills.

Still wanting to satisfy the fans, the folks behind Welcome to Night Vale flew out on their own dime. They paid for their own accomodations. They footed a lot more of the bill than most con guests are willing to.

Having done their meet and greet still having received nothing, the Welcome to Night Vale folks simply asked that DashCon be willing to pay their appearance fee before going on. This is their job, and asking for this was by no means an unreasonable request.

And DashCon couldn’t fulfill it.

So, like any artist who has just had an agreement broken on them, they walked.

And I don’t blame them.

Jeffery Cranor, co-creator of Welcome to Night Vale, issued an apology to fans. Is it sad that he had to apologize because DashCon couldn’t fulfill its part of the deal? Yes. But at the very least it shows that Cranor and the rest of the Welcome to Night Vale crew have much more class and grace than you’d expect from someone who literally just spent a boatload of money to show up somewhere for a job and only find themselves shafted.

While the antics of the previous evening had led the internet at large to begin criticizing the convention, I am fairly certain that this was the point that many at the con realized exactly how far ’round the bend things had gotten.

Most guests started ducking out as soon as their obligations were met, including the “Baker Street Babes” (who I will admit I know nothing about).

For those wondering, we're not participating in #Dashcon anymore. We decided to leave earlier today. Stay safe and best of luck.

Most of these guests found themselves paying their own hotel bills. Since the end of the con, the Baker Street Babes appear to have been reimbursed, but only after threatening to contact their lawyer.

Others, at least as of last night, still have found themselves with little to no recompense.

Cool that DashCon got in touch with the Baker Street Babes to settle their accounts. Still waiting here, though.

DashCon then was an amazing thing. It was a convention that managed to do literally everything wrong… but it still happened. Weaker cons, cons with more sense at least, would have failed with but one of these events. Most would have folded before they had a chance to open their doors… but something kept this con aloft just long enough to show us exactly how badly someone can mismanage an event.

I just wish I could have been there myself.

I totally would have stolen that ball pit.

Update: It appears that Noelle Stevenson has now been reimbursed for her hotel room.

my hotel room has been refunded, happy day!

2 thoughts on “DashCon: A Perfect Storm of Incompetence”