Ryan Kopf and his company Chrono LC (which operates under the name “AnimeCon.org” and manages Anime Zap, QC Anime-zing!, Anime-SPARK!, AniMinneapolis, Meta Con, Con Alt Delete, and Anime Midwest) don’t exactly have the most sterling reputation. I won’t spend a lot of time rehashing stories that have made their way around the con scene, but you can just Google Mr. Kopf’s name yourself if you want to look into it more.

So if you were a part of the AnimeCon.org staff, knowing your organization’s past PR problems, you’d probably go out of your way to avoid creating any bad publicity or anything openly laughable.

Well unfortunately AnimeCon.org’s staff isn’t as smart as my hypothetical “you.”

You see, a guy named Daniel got banned from AnimeCon.org events — and I’m not here to debate that. I don’t know the guy, and maybe it was justified and maybe it wasn’t. The circumstances in which this gentleman got removed are not really at issue. No, what’s at issue is the message an AnimeCon.org staffer sent Daniel informing him that he was banned.

Because it is bizarre, overreaching, and wholly unenforceable. 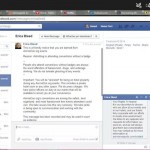 Daniel posted a screenshot of this interaction to his Facebook page, and I first heard about it when a friend forwarded it to me.

In the message, AnimeCon.org staffer “Erica Bleed” sent the following message to Daniel:

This is a friendly notice that you are banned from AnimeCon.org events.

Reason: Admitting to attending conventions without a badge.

~
People who attend conventions without badges are always the worst offenders of harassment, drugs, and underage drinking. We do not tolerate ghosting of any events.
~

Important: You will be *arrested* for being on hotel property during any AnimeCon.org events. This includes a private hotel room or any other space. We do press charges. We have police officers on duty at our events that will be available to arrest you at your convenience.

AnimeCon.org’s conventions are among the safest, best organized, and most harassment free events attendees could visit. We take issues like this very seriously. We take pride in being open to communication and working with the community. This message has been recorded and may be used in court as evidence.

Your Rights To Appeal
It is our discretion to choose who we allow at our events and in our hotels, and our hotels fully cooperate with our efforts to create a fun environment. We listen to any appeals and requests for information you send us, and we will always give them due consideration. You may contact us for more information at animinneapolis.com/contact

Now, I’ve been attending cons for over twenty years, staffing them for almost as long, and organizing my own events for over a decade. While I am the only one of my siblings who isn’t a lawyer, I have interacted with quite a few hotels and know the ins and outs of the types of contracts conventions have with them.

This has literally been my world for quite some time.

With that in mind, there are a lot of things that jump out at me about this statement. Frankly, there are so many, that I’m just going to hit the highlights.

First off, I will say that it is well within AnimeCon.org’s rights to ban anyone they want to. As long as it’s in their attendee policies, they can say “Bob Smith Can’t Come” even if it’s just because they don’t like people named “Bob Smith.” That said, there are lots of stuff they can’t do which they stipulate in this statement.

AnimeCon.org cannot (under their current operating model) ban you from entering public areas of the hotel, nor can they ban you from private hotel rooms they are not directly paying for. If you have directly reserved a room with the hotel, you have a personal contract with the hotel regardless of whether or not it is part of a room block reserved by AnimeCon.org. AnimeCon.org has no power in that agreement, meaning you can be present in your own room, the room of someone who is allowing you to be their guest, and any publicly accessible spaces required to get to said room.

While the hotel can ask you to leave, they likely won’t because they have no vested interest in doing so.

So, if AnimeCon.org attempted to have you arrested for entering the hotel without direct consent of hotel staff they would be likely breaking the law themselves. I also find it kind of amazing that the various hotels they’ve worked with are all willing to fall in line to a T. AnimeCon.org doesn’t run huge events, so they are hardly in a position where they can arbitrarily order hotels around. I’ve rarely found consistency in the hospitality industry when it comes to how they acquiesce to demands, and while maybe one or two might fold to an annual convention, considering the number of venues they contract with, I find it incredibly unlikely that all of them would.

This isn’t the first time people have talked about AnimeCon.org and Ryan Kopf making overreaching statements about their power to remove people from the facilities they rent though. There have been other reports relayed from witnesses, but this is the first time we’ve heard it come directly from an AnimeCon.org staffer in writing.

Now, let’s just look at that Staffer really quickly. First off, I do want to say, that to the best of my abilities I have confirmed that “Erica Bleed” is a representative of AnimeCon.org.

Ms. Bleed interacts regularly with known AnimeCon.org staffers on Facebook like Erica C. Wise (who many have theorized this is the same person as, but I’m doubtful of), and pretty much posts about AnimeCon.org stuff publicly. 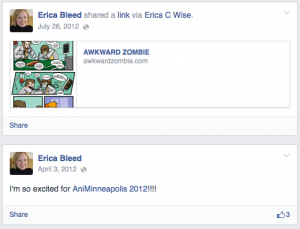 In truth, I really had no reason to doubt the veracity of the account, until I stumbled across another Facebook user named “Erica Woodbridge.” Now could Erica Woodbridge from New York just be an old account for an Erica “Bleed” who lives in the Midwest? Yep. Absolutely.

But it’s still a bit weird. 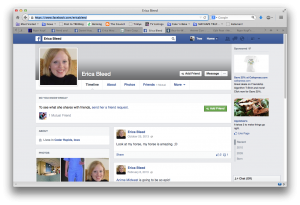 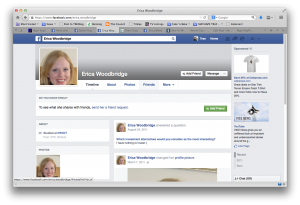 Now I could go make jokes about how AnimeCon.org events are supposedly “the safest, best organized, and most harassment free events attendees could visit,” or criticize the bizarre logistical leaps they try to make in equating badge thieves with those who harass, do drugs, and enable underage drinking (all of which I’ve had to deal with over the years — and without fail the worst offenders have usually been people who paid for badges).

But then we’d be here all day, and I figure that’s what the comment section here and on Facebook is for.

What’s important though is that AnimeCon.org has gone on record issuing unenforceable threats in an attempt to intimidate a now former attendee. And that?

That’s just not the smart move ever.