For those of you who don’t remember, DashCon will likely go down as the worst managed convention of 2014. Even with all of its issues though, DashCon 2015 was almost immediately announced for June of 2015, set to be held in Indianapolis instead of the Chicago suburbs.

And yes, I was kind of surprised by this.

What I’m not surprised by though is DashCon’s attempt to rebrand itself. You see, the organizers have smartly decided to disregard the DashCon name… and have rechristened the convention “EmotiCon.”

That’s going to be really difficult to find in Google.

The DashCon website is gone, but the EmotiCon/Emoti-Con site (the URL makes it hard to figure out which spelling is supposed to be official) sits proudly on the internet, ready to take your money. The casual observer might not even realize DashCon II and EmotiCon are the same event, as the EmotiCon site goes out of its way to avoid mentioning the former (although much of the text remains unchanged from the DashCon site and there is a self referential bit about the Ball Pit). But if a person pulls up the Indianapolis Convention Center website, you find the following:

I mean, the fact that the location and dates matched the previously announced information for DashCon 2015 were probably a tip off too, but it’s always nice to have a little bit of confirmation. Of course, if you were to ask EmotiCon’s organizers if it’s a rebranded DashCon, you’ll get a very different story: 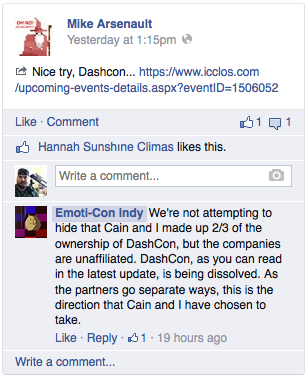 I know they want to pretend it’s a different con, but it isn’t. It just really, really isn’t.

And that’s actually okay. I totally get wanting to distance themselves from a disastrous first outing – but something else has been bothering me. You see, there has already been an event called “Emoti-Con” for quite some time in New York. It’s not a fandom convention, but it is an actual thing. The golden rule of convention naming is that you never take someone else’s name, period. Sure, it used to happen back in the day before we all used the internet (hence the two unaffiliated cons named “MarsCon”), but in these days? It’s just… not done. And the EmotiCon staff know about Emoti-Con, as they’ve added a disclaimer to their website about it already. Of course, that’s because someone told the other Emoti-Con about it.

So if you thought that DashCon’s staff had learned their lessons from their “TumblCon USA” name fiasco when renaming to EmotiCon, you would be… really, really wrong.

But hey, it’s going to be held less than an hour from where I live.

So I’ll probably be there.

Thanks to Dillon Kaarstad for the tip!

15 thoughts on “DashCon Rebrands as EmotiCon, Hopes You Won’t Notice”