The Milwaukee based Fantasticon held their first event this last October, and sadly it seems like it will be their last. According to internal sources, the convention is out of money, and cannot afford to hold a second event.

This Fantasticon is not to be confused with the other, and slightly older touring Fantasticon shows, which have an upcoming event in Toledo, OH. Nor is it related to the FantastiCon in the UK… or the one in Denmark.

(How has no one gotten sued yet?)

While attendance wasn’t up to organizers hopes for their 2014 show, from all reports it was decent for a first year convention. So who do organizers blame for the failure? Is it their budgeting? Is it overspending on pricey guests they couldn’t afford? No.

They blame you. Well, us. Well, pretty much everyone but themselves.

In a post to the private Facebook Fantasticon group (which has since been leaked), convention organizer Henry Jones posted the following:

This post is, frankly, puzzling at best. If the attendees who come to your show aren’t interested in purchasing expensive autographs, perhaps an organizer should be looking inward as to how they’ve misjudged the market… not blaming the people who have already paid you to come.

And the comments about Awesome Con Milwaukee (whose cancelled show had more to do with the failure of their Indianapolis con than anything) are exceptionally puzzling. Why? Because Fantasticon staffers were reportedly emailing people telling them not to go to Awesome Con.

Truthfully, Fantasticon’s low turnout (which, again, wasn’t that low for a first year con according to everything that’s been written) has more to do with their lack of Marketing. Fantasticon did very little promotion in the larger Wisconsin Convention scene, which (as I’ve stated many times before) is key to developing an event like this. They did almost no promotion at other Wisconsin cons, and to be successful in any space, you need to actually advertise.

The only successful con in Wisconsin that didn’t extensively promote at other, regional cons for years before their first event was Wizard World Wisconsin in Madison… and that’s just because Wizard World has an exceptional internal promotional machine which took them decades to build.

To illustrate just how out of touch Fantasticon’s organizers are, Henry Jones went on to say in the post’s comments: 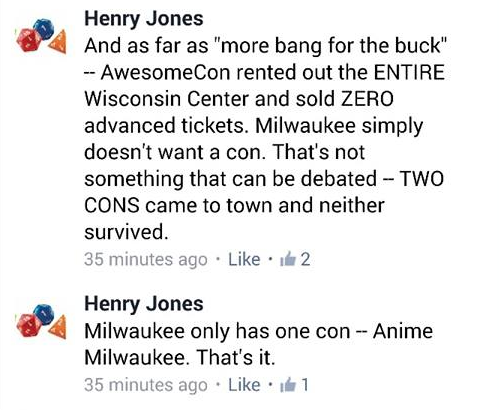 This is… wrong? This is wrong. I can name off the top of my head, without looking anything up, five Milwaukee based cons which focus on retrogaming, comic books, anime and tabletop gaming… so y’know, there’s a bit of variety out there.

Milwaukee is full of conventions.

And if you expand to the larger Wisconsin region, there are even more events, most financially successful and viable. Most first year conventions lose money, and as I’ve said many times before, you should never start a con if you can’t afford to lose everything you put into it. Of course, I also tell people to research the region… and doing that might have told them something.

Anime Milwaukee is the biggest convention in Milwaukee currently, and while they now regularly post attendance figures north of 6,000, it took them a good, long time to grow that size. In fact, the first year of Anime Milwaukee was so abysmal that they literally stopped counting it as an actual event, and had an awkward “.5” on the end of their numbering for years before dropping it.

Fantasicon Milwaukee’s failure is, in truth, due to the overconfidence and poor budgeting of its organizers. It’s not the first con to fall to these factors, and it won’t be the last. To blame the failings on the larger geek community, who they barely reached out to in the first place, shows a lack of awareness which is mindblowing.

But hey, we’re talking about guys who didn’t even check Google to see if their name was unique when they launched – so are we really surprised?

Update: We dug much deeper into Fantasticon and “Henry Jones”

2 thoughts on “Milwaukee’s Fantasticon is Out of Money, Won’t Run a Second Event”