So one of the more interesting casting choices made for Batman v. Superman: Dawn of Infinite Crisis on Secret Earths of Justice has been Jesse Eisenberg as Lex Luthor. Personally, I’m optimistic about the casting, as Luthor is always used best when he’s updated for the current moment in history. I mean, the guy has been everything from a mad scientist to a corporate shark to the President of the United States.

So a young-looking, fast talking savvy Luthor who (due to playing him in a much classier film) reminds the audience of one of the best known tech industry CEOs? Sounds appropriate to me.

Anyway, the folks over at EW have released the first official photo of Eisenberg as Luthor — and I think he looks pretty good. Take a look yourself. 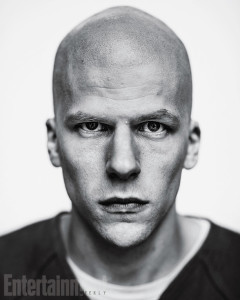 One thought on “First Look at Jesse Eisenberg as Lex Luthor”