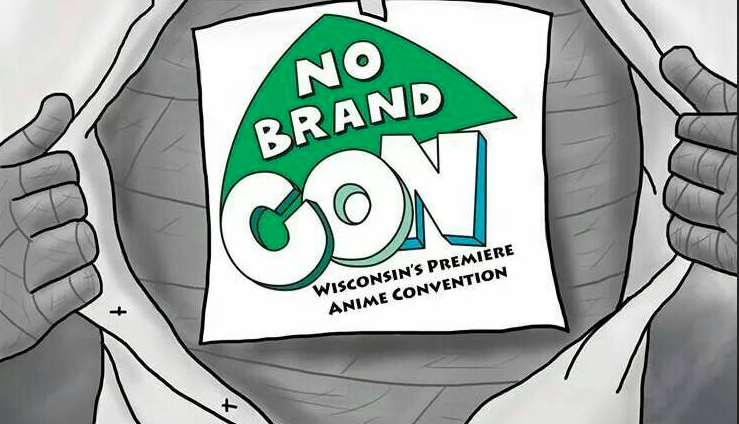 No Brand Con, Wisconsin’s oldest and longest running Anime Convention, has been held in Eau Claire, WI since its first event in 2002. The convention unceremoniously announced today, at the beginning of their 14th convention, on the back of their program guide that the event will be relocating to the Wisconsin Dells for next year’s event.

No Brand Con 2016 will be held at the Chula Vista Resort in the Wisconsin Dells from April 15th-17th.

This is the point where I need to disclose a few things. Many of you know that I am a co-founder of No Brand Con. I stepped down from active staff a few years ago, but currently still function in an advisory capacity to the organization. I, honestly, have known about the move for a year, but promised not to mention it until the convention itself chose to make the decision public. While I was not a part in the decision to relocate, I did heavily lobby for the Wisconsin Dells as a viable location if the convention was ever forced to relocate.

You have to understand that this is a decision the convention has been considering on and off since 2007.

But I also want to be clear that No Brand Con, as an organization, had no input on this article and that I am not in any way a spokesperson for the event. Statements made by myself or any other members of Nerd & Tie should not be taken as the opinion of No Brand Con, Inc.

But that’s enough of that.

The primary reason cited for the move by No Brand Con’s current organizers is that their current venue cannot support the event’s continued growth. Last year’s turnout was almost 1500, with even more expected to show up this weekend (straining the event to capacity). And while the convention has had several homes in Eau Claire, their current hotel (The Plaza) is the largest available in the town.

The Wisconsin Dells were chosen due to the available convention space in the city along with their proximity to Eau Claire (I mean, 150 miles is kind of close). The convention also wanted to remain in Wisconsin, so relocating to the (slightly closer) Twin Cities was not an option.

Because you can’t keep calling yourself “Wisconsin’s Premiere Anime Convention” if you’re in Minnesota.

It’s not a move without controversy. Moving a convention like this always damages the city it leaves. One long time attendee who asked not to be named said “What a slap in the face this is to people that live in Eau Claire,” as it leaves the region without a convention. According to the Eau Claire Chamber of Commerce, No Brand Con brings in over a quarter of a million dollars in tourist revenue to the Chippewa Valley, and I can’t see how the loss won’t have a lasting effect.

Honestly, as far as I can tell though, No Brand Con had two options: enforce a strict attendance cap (which would turn people away at the door) or move to another city. While it does mean that some of the current attendees won’t be able to attend the event, the truth is a vast majority of the people who come to the event are not from the local area.

They were stuck between a rock and a hard place, and they had to make a choice. Whether or not it was the right one (and how the congoing public will react) remains to be seen. We will post additional updates if they’re needed.