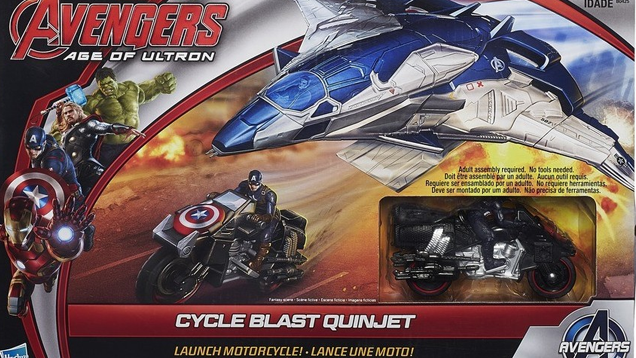 It was probably one of the coolest scenes in Age of Ultron, right? Cap and Natasha are chasing down Ultron, and Black Widow jumps out of the Quinjet on a motorcycle and flies through the streets of Seoul to- well, we all saw it.  And it was badass. And how cool of a toy would that make, am I right?

Well, Marvel and Hasbro have teamed up to bring you that toy so that you can re-create one of the best scenes of the movie! Well, as long as you don’t want to have Black Widow in it.

Yes, a toy based on one of the best scenes from the badass lady Avenger doesn’t have her in it. Instead, Captain America has taken the role from Black Widow and is the figure included in the set. That doesn’t even make sense. If Captain is riding the cycle, WHO’S FIGHTING ULTRON?

We see merchandising failures from DC and Marvel time and time again when it comes to the female demographic, but this just goes beyond reason. At some point, shouldn’t someone have said “Yeah, but guys…isn’t Black Widow in this scene? Shouldn’t we…no? Oh…okay…but…”. Something, ANYTHING, to point out that they were leaving out a crucial character. The fact that the crucial character left out is a woman, not to mention Marvel’s recent leaked e-mail problem …  it makes you wonder if anyone at the top is even trying.