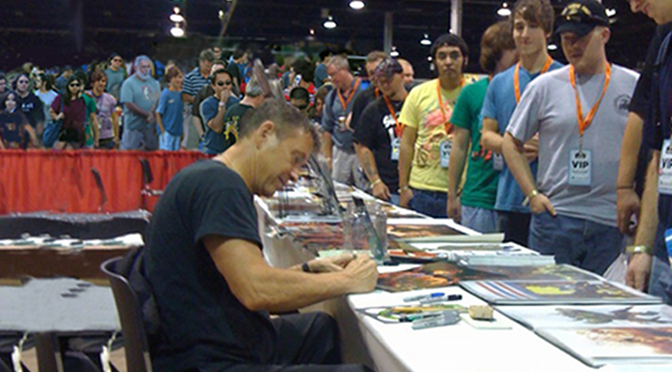 You may remember that a few days ago we talked about artist Arthur Suydam’s reputation for taking over other artists’ table at conventions. You see, he apparently did so again this last weekend at Montreal Comic Con, and it hit Twitter.

That of course caused the story to spread like wildfire.

Since then, Montreal Comic Con has issued a statement taking some of the responsibility for the incident, but the world had yet to hear from Suydam himself on the matter.

Well that is until he emailed out the following to quite a few people (including several reporters):

The Montreal show changed its floor plan on Thursday, the day before the show, however they didn’t send out notification and only the 5 American artists at set up time on Thursday nite knew of the table placement floor-plan change.

The next day at show-time the Canadian artists unfortunately began hearing from a singular trouble-making fan artist who wasn’t there at set up who began spreading fabrications to the artists and online that the American artists at the row-end were taking their tables (and guess who that lucky artist on the end was).

The fan artist wasn’t in the loop on Thursday and so knew nothing. This is the guy who sat across from us all weekend long at his table with no fans and no one paying him any attention while the crowds flocked to the American artist’s tables.

Then the low-I.Q. online crowds, too lazy to check facts more interested to turn simple misunderstandings into an opportunity to create some trouble jumped in.

The show promoters have since come out and corroborated these facts.

Now this entire bizarre rant is, at best, a bit loony tunes. I might buy the “change to the floorplan” story if Suydam didn’t have a reputation so well known for stealing tables that people guessed who had done it without ever hearing his name.

Also, Suydam gets super weird and insulting on levels that are just puzzling – but hey, we all know insulting the “online crowds” which included some of the biggest names in comics and most of your potential fanbase never backfires.

The entire thing gets weirder, as after publishing the statement, CBR was asked to take it down by Suydam’s booking agent, claiming it was never meant for the public. CBR chose to take the statement down, but as Suydam literally emailed it to reporters and never said it was off the record, we consider it fair game here at Nerd & Tie.

So, y’know, that happened.

Additionally, it’s been confirmed that the photo of a line Suydam likes to use in promotional materials is highly photoshopped — with most of the line being cobbled together from other photos:

Suydam has admitted to the image being fake (because “duh”), but is blaming the whole thing on an unnamed assistant. Of course, with how disconnected his earlier statement regarding Montreal Comic Con is from objective reality, most of us aren’t really buying it.

And hopefully neither are you.

Via The Outhousers, CBR, Bleeding Cool

One thought on “The Arthur Suydam Situation Gets Weirder”