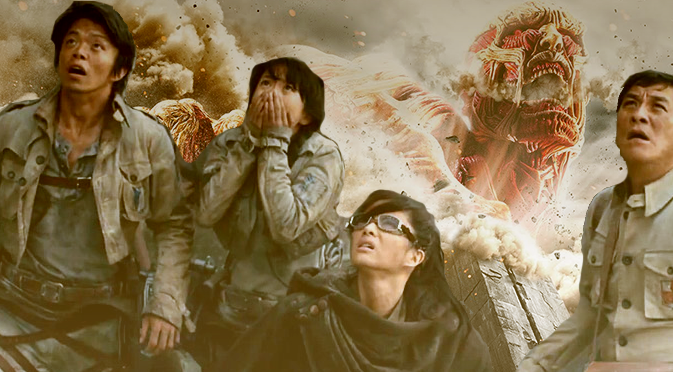 Live action anime movies have been on the up-and-up recently.Be it the Battlestar Galacticaesque Space Battleship Yamato, the shockingly period-accurate Rurouni Kenshin trilogy, or even the Tom Cruise blockbuster Edge of Tomorrow which was based on Hiroshi Sakurazuka’s All You Need is Kill, it’s clear that live action anime have come a long way since Dragonball Evolution.

It should also come as no surprise that Attack on Titan, one of the most popular series of the last five years, would get its own live action film too. With a cast of great characters and a director like Gamera-trilogy veteren Shinji Higuchi, what could possibly go wrong?

The answer you ask? Almost the entire film.

Attack on Titan Part 1 (yes they felt the need to split this in half) is a mess of a film certain to confuse newcomers and disappoint diehard fans.

While the original series is set in a post apocalyptic Europe, the film makes the jarring decision to be set entirely in Japan. While this, on it’s own isn’t that odd, when an all-Japanese cast have names like Sasha Braus, Jean Kirstein and Armen Arlert, one is forced to wonder if what remains of humanity is trapped in some cult of bizarre Japanese German culture aficionados.

The story follows Eren Jaeger (presumably named as such because Deutschland von Protagonist wasn’t subtle enough), a young man who is dead set on getting revenge after Japanese Oktoberfest is raided by Titans, cannibalistic giants, in the first act. After watching monsters slaughter his neighbors and believing that they had killed his girlfriend Mikasa, Eren and Armin join the military and two years later they are sent on a mission to take back humanity’s farmlands from the giant, occasionally skinless, people eaters.

What follows is a series of poorly connected scenes of violence, unrelatable characters, and a script that can’t seem to decide if it wants to follow the source material or do its own thing.

I think the changes to the characters is what will ruffle the most feathers, while the manga and anime bring together an ensemble of people who represent both the best and worst of humanity up against an inhuman threat, the film focuses on far fewer characters and still can’t manage to give any of them any motivation that makes sense. Eren, for example, claims that he wants revenge for Mikasa, but when she (SPOILERS!) returns, he’s reduced to a simple jealous ex-boyfriend when it turns out that she’s been sleeping with her commanding officer. Mikasa herself goes from a stunned waif at the beginning (something she never was in the source material) to ultimate badass simply because she was injured so badly in the first attack that she not only became a soldier, but also never bothered to tell her friends and boyfriend that she was still alive.

Now, one might be thinking, what about other characters? Most of them weren’t in this. Favourites like Annie, Irwin and (even the most popular character by a landslide) Levi, have been removed entirely, which perhaps saves them from the embarrassing fate of having been in such a terrible adaptation. Higuchi justified the cutting characters by saying that he wanted to focus on the relationship between Eren and Mikasa, but there are two problems with this: One being that Mikasa is a non-entity for the entire second act of the movie, and the other being that this didn’t stop Higuchi from introducing two new characters of his own (both of whom have Japanese names). The typical movie bad boy, Sakishima, both fills in for Levi AND mostly exists to cause tension between Eren and Mikasa. The other is a single mother whose only function in the story is to awkwardly try and seduce Eren. Neither of these characters work in any sort of way. Sasha and Hanji/Hans are quite honestly the only characters who work, if only because they are the only two who aren’t entirely bland or insufferable.

The plot, which is already paper-thin, is not helped by the fact that it is propped up on entirely uninspired and quite honestly terrible action scenes.

I want this on the record, I love Japanese special effects movies. I regularly watch Kamen Rider. I love Ryuhei Kitamura movies and I normally love Shinji Higuchi.  Hell, I sat through the Sailor Moon live action series, where they intermittently had to have the actors visibly move a cat plush to get said cat to talk when she wasn’t a horridly rendered CG nightmare. I am saying this so that you can understand what I mean when I say that the CG is terrible. Yes I mean that by Japanese CG standards.

The CG Titans look both incredibly out of place and goofy, even as they spill gallons of equally fake looking blood over the city. But what actually beats them out for worse visuals is the series signature 3D/Omni-directional gear.

The aforementioned gear might be the silliest means of transportation in all of fiction, but it is in the anime and manga. Think symmetrical motorized grappling knives strapped  to both sides of a person’s waist that would make Newton piss himself. These physics-ignoring devices, while very cool in a comic or anime, are completely ridiculous in live action and are made worse by the movie’s own effects. Every time someone uses these things, it looks terrible, which might be why the movie seems to go out of its way to avoid using it.

That’s right, the gadget most synonymous with Attack on Titan is barely in the movie. The characters are never seen training with it, even after they establish it is a brand new device. They even ride around in a truck at one point (as there’s no cavalry in this version either). When the gear is used it is always in poor lighting, which still doesn’t mask that it is another bad digital effect.

Everything in this movie looks cheap. Limited lighting is used to try to cover for this, but the lighting is so limited that it is very hard to even tell what’s going on in some scenes. The costumes also look cheap. The average cosplayer’s Scouting Legion Uniform looks better made than the ones in this movie, while the Garrison guards wear what I’m certain are WWII Japanese uniforms with large patches sewn on the back.  The battles are set to a shockingly lifeless score by the normally awesome Shiro Sagisu. All of this is made worse by the fact that this this movie doesn’t actually end.

The cliffhanger ending is awkward and fails to make the viewer excited for the second film,  Attack on Titan: The End of the World. I was excited for one thing though, the movie was mercifully over.  I can’t imagine being invested in this. The characters are awful versions of the great ones created by Hajime Isayama and the plot has been changed to the point there is nothing engaging left and from what I’ve heard from Japan, the second film does nothing to improve this.  While live action anime may be improving, you wouldn’t know it from this terrible, terrible movie.

One thought on “An Attack on Titan-Sized Movie, and it’s Terrible.”