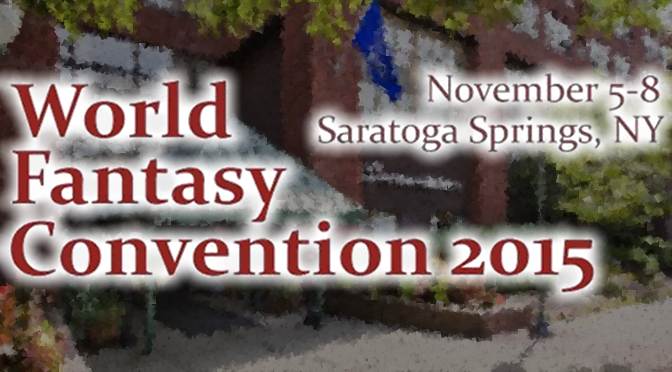 Update: Amazingly, the World Fantasy Convention 2015 committee is fixing this and adopting a better policy. The original story appears below.

It’s only been in the last few years that a spotlight’s been pointed at the harassment issues that exist in the convention community. It’s not a new problem, but the fact is it’s one a large percentage of the public were completely unaware of.

While the issue is far from solved, most community conscious conventions have decided to stand up for victims, and have begun adopting stronger, clearer anti-harassment policies. Frankly, creating a safe space for attendees to enjoy themselves is a key responsibility of any convention staff, and preventing harassment in the community is vital for its survival.

Well, the people running the 2015 World Fantasy Convention have taken a different tack. In a recent mailing to its members, they sent out their new harassment policy.

Okay, maybe that’s a touch unfair (if only slightly). Here’s the policy they sent out via email in full:

Harassment Policy
In New York State harassment is a defined criminal offense. None of the Committee, Hotel or City Center staff are trained to recognize the difference between legal harassment and incorrect/uncivil behavior. We have consulted with the Saratoga County District Attorney and the City of Saratoga Springs Police Department and been advised to report any incidents to the Police Department so that they can determine if the reported conduct meets the legal definition of harassment to charge the offender. If a Convention member feels that they have been harassed, please report it to any Committee member or the Hotel main desk staff who will promptly notify Police. The Police have said they will respond promptly to deal with the situation.

Needless to say the Committee hopes that members behave in an acceptable civil manner toward other Convention members and the staff of the Hotel, bar/restaurant and City Center. No one wants to behave in a manner that draws Police attention. Offenders will be prosecuted and the consequences are severs [sic].

What this really means, in simple terms, is that the organizers of the 2015 World Fantasy Convention released a harassment policy which effectively states that any harassment reported is just going to get forwarded to the local Police. While that might seem sensible at first, there are a crapload of reasons why it isn’t.

First off, there are limits on what the Police can do. A convention can do lots of things on their own — like eject an attendee from the event. The cops don’t have that authority unless they’re actually arresting someone… which they probably won’t do. They’d need the organizing committee to evict the attendee in the first place, but since there isn’t a structure to do so, this is just going to end up as a massive waste of police time.

Secondly, the legal definition of harassment is far more limited than what most cons include in their policies. Yelling hate speech or making inappropriate comments may be clearly considered harassment by most of us, but it’s the sort of thing the cops can do practically nothing about.

Thirdly, on the off chance the cops show up and the law has been clearly violated, they can only really do something if they witness it themselves or think there’s enough proof to prosecute. Almost all harassment comes down to the word of the alleged victim versus the world of the accused offender, and while a convention staff can make a judgment call on that, the police can’t.

While the policy claims that offenders will be prosecuted, the fact is on the off chance that happens, the victim would have to return to the city post convention to continue pressing charges (which is nuts when you consider how far away many travel for the World Fantasy Convention). Also, the harasser is a massive flight risk. — and no one’s going to bother pursuing someone for that small of a legal offense.

This is not even mentioning the fact that some victims are not comfortable with reporting things to the police. By saying any reports will automatically initiate contact with law enforcement, the policy will have a chilling effect and prevent some victims from reporting their harassment in the first place.

In the end, what this means is that the 2015 World Fantasy Convention has no enforceable harassment policy and they’re likely to do nothing more than annoy local police who will get tired of getting called for things the convention staff could do themselves.

The only good news is that with the convention still over a week away, there’s time to change this. They have yet to publish this policy on their website, and they have the opportunity to update this with a more reasonable policy… that actually does something. I don’t think it’ll actually happen mind you — but there is at least a flicker of a chance that things can get better.

But, again, they probably won’t.