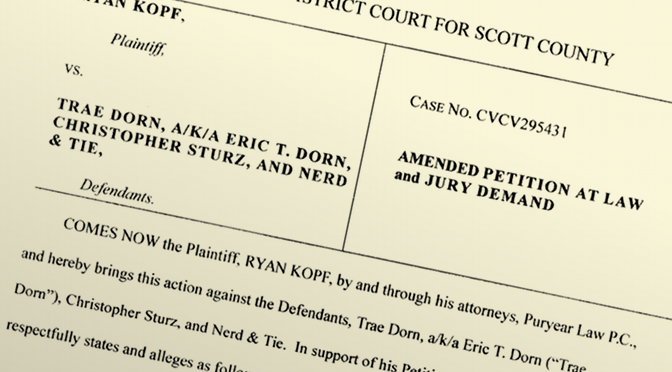 So many of you already know that in December AnimeCon.org CEO Ryan Kopf filed a lawsuit in the state of Iowa against me for articles I published here on Nerd & Tie about his organization. After I was served, I quickly went public — starting a GoFundMe campaign to raise money for my legal defense (because, y’know, lawyers are expensive).

Pher Sturz, who co-hosts the podcast with me (and came up with the name for it — which is where the name of this site comes from), was very vocal in his public support for me. Pher did this because he’s a good friend, and wasn’t really any more inflammatory (and in most cases significantly less so) than most other people sharing the link.

Here’s the twist — after that happened, Mr. Kopf had the petition amended. Now it names not just me, but also now Pher Sturz as well.

You can read the full amended petition, but there are some basic things you need to know. To start, you may have noticed that “Nerd & Tie” was also named directly in the petition. We haven’t made a big deal about that only because it’s wholly inconsequential. We don’t talk about it that much, but for a very long time (and long before any of the mentioned articles were published), the ownership of the Nerd & Tie website has been solely in my hands.

There is no other legal entity, and I pay all the bills and personally own all the assets.

This means that Pher Sturz is not being sued for anything published on this website, but solely for posts he allegedly made on his personal Facebook page. I don’t want to go into the legal merits of Kopf’s case, but Pher’s never made any claims that haven’t been posted by others before him. It seems like his support of me is the only thing that has put him in the firing line.

To make this worse, Pher, frankly, doesn’t make a lot of money. And I know he won’t point this out himself, but he has a young daughter as well. Lawyers are really, really expensive and he needs to hire one fast. His original attempt to secure aid fell through, so now we’re reaching out to you — the Nerd & Tie readers.

Pher has launched a GoFundMe campaign (Titled ‘The Ryan Kopf is Suing Me Too! Fund‘) to try and get money together to hire someone, and I hope you’ll consider contributing. He’s asking for $3000 right now because (after fees) that’s effectively what he’ll need to get started.

Pher has also stated that any money raised through the GoFundMe campaign beyond what he ends up needing will be donated to the Joyful Heart Foundation, so even if this gets settled immediately your money will go to a good cause.

Update (3/8): While the case is still active against Pher Sturz, a motion to dismiss has been granted for me (Trae Dorn).

3 thoughts on “So AnimeCon.org CEO Ryan Kopf is Now Suing Pher Sturz Too”