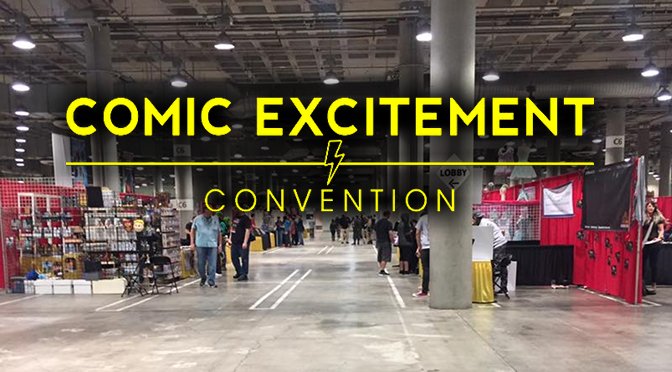 You’d probably be forgiven for not knowing that “Comic Excitement Convention” (yes, that’s the actual name) took place this last weekend in Los Angeles, CA. Despite their touted $10,000 cosplay contest prize, it doesn’t seem like a lot of effort was put into marketing the con.

Which is probably why hardly anyone showed up.

The first year convention occupied Kentia Hall at the Los Angeles Convention Center, and although early promotional materials talked about expecting a massive turnout, at con observations estimate attendance to be under a thousand. The whole thing… well it seems to have been a mess.

The organizers of the show just didn’t think things through it seems. While they were clearly focused on Cosplay (again – there was a bananas $10,000 prize), the con was scheduled up against Anime Impulse, a second year show also held in the L.A. area. Comic Excitement was also much more expensive to attend than Anime Impulse, with one day preregistration costing $30, rising to $40 at the door. Compare that to Impulse’s pricing, where two day badges could be purchased for $22.

And what you got for that expensive badge was… well… not much. Beyond the cosplay and fashion shows, the entire convention consisted of a vendor room and nothing else. It’s clear the majority of the ticket pricing went into supporting only the bizarrely high cosplay prize and the guest list.

For attendees, it’s hard to see how it was a difficult choice. Anime Impulse offered a full programming track for less than half the price of the barebones Comic Excitement Convention.

Small show at the LA Convention Center Parking lot. Not a lot of vendors and barely any people. A con's worst nightmare. #comicexcitement pic.twitter.com/sRFEv4ZPI5

Honestly, with how poorly this show was promoted, you might be asking yourself how we even found out it was happening. It actually came to our attention months ago when we were pointed towards the con’s harassment policy. You see, Comic Excitement Convention has what can best be described as one of the worst harassment policies I’ve ever seen — as defined on their official website it’s simply:

I’m not kidding. That’s the whole thing. No definitions, no penalties… just three words. It’s almost like it was a joke to them. Fortunately there don’t seem to have been any major problems that arose from this their first year, though that may have something to do with how few people actually were in the building.

The few policies the convention did enumerate didn’t seem to be closely followed at all too. The con website did spell out a vague Weapons Policy:

Costume weapons are allowed only if they are very obviously safe. Please do not bring anything sharp or that can poke out an eye.

All weapons are subject to inspection and tagging.

While not exactly detailed, it appeared that there was a clear system in place to handle realistic weapon props. Of course, appearances can be deceiving.

The at convention experience was apparently very different. According to The Sideshow Podcast host Mia, there was no at con tagging system in place, and security took issue with the painted squirt gun she was using as a prop. Security reportedly told her she would need to either get rid of the fake gun or leave the premises. This is explicitly contrary to the listed policy (which should have allowed her to keep the toy with an additional safety tag).

As this policy is still listed on the official website for the con, it’s hard to argue that the policy had changed at con. It’s an example of a con staff so poorly trained that they had zero idea what they were doing.

Show is small relative to the space at the LA Convention Center. With few vendors and no panels, the show has been empty.#ComicExcitement pic.twitter.com/cUrNlFxbu8

According to people we talked to, Comic Excitement was run by a first time showrunner, who while reportedly talking to experienced con staffs, didn’t have any experience working cons himself. It also seems like any of the advice he was given was largely ignored. Frankly, this whole show was a mess, and I’m left scratching my head as to who the heck this was targeted at.

I mean, the marketing (with that weirdly massive $10,000 prize) was clearly targeted at Cosplayers, but the rest of the actual content of the show was clearly pointed towards a Comic Con audience. The people who want vendor heavy flea market and guest focused shows aren’t nearly as interested in that.

On the flipside, those heavily into cosplay are usually more interested in shows with much stronger programming tracks too. The Anime Con scene (where competitive cosplay is taken much more seriously) doesn’t really have flea market type shows. Even the smallest event will have a solid track of panel programming throughout the con. I’m just left scratching my head wondering who organizers thought the con was for.

But I guess if attendance numbers tell us anything, the answer seems to have been no one.