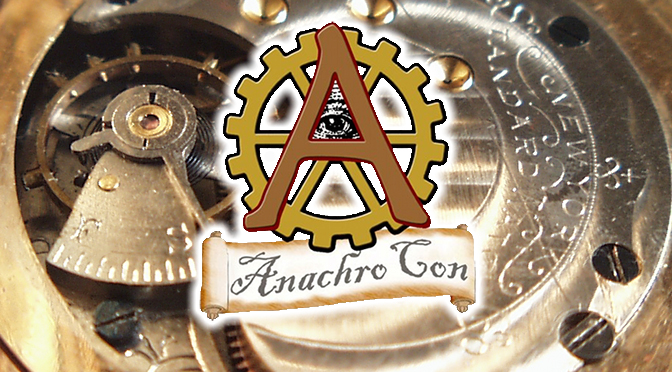 The Atlanta, GA based convention AnachroCon might be more aptly named “AnarchoCon” these days. Earlier this week the convention’s Chair and legal counsel Sarah Avraham stepped down in what sounds like an extremely complicated situation.

In a public Facebook post Avraham detailed the reasons for her departure, and while you should really read that post in its entirety, I’ll do my best to summarize it. It starts when Avraham was approached by William and Cindy MacLeod in the spring of 2016 to take over the event in an attempt to rehabilitate the convention’s image and get it back on track financially.

Because man, this con needed help.

If you were curious as to why the con’s image needed rehabilitation, it’s because back in 2014, while holding the position of convention Chair, William MacLeod was quite publicly accused of inappropriate behavior and sexually harassing women AnachroCon staffers. As this took place prior to this blog being launched, you’ll have to head over to the Steampunk Chronicle to get the larger details.

As for the financials, Avraham states that the con was massively in debt (the most specific she gets is saying it was “five figures” worth). To help solve that, a major financial reassessment went into action including a massive audit of all the con’s accounts. Avraham’s husband Yeshua was brought on as a financial consultant too.

There’s quite a lot going on here, and really we just have Avraham’s account to go on. The core issue though seems to be that William MacLeod was no longer supposed to be managing any day to day activities with the con, but (again — according to Avraham) he repeatedly began to interfere with things behind her back. Notably this including reaching out to the hotel when he had no authority to do so. As Avraham had insisted on transparency and directness, this was apparently a bridge too far. When she took it to the board though, the board apparently chose not to side with her. According to her statement, Avraham felt resignation was her only choice.

That’s honestly leaving out a lot of details, including where Avraham alleges financial misconduct by Cindy MacLeod, and it’s important to remember this is just one side of the story. It’s an interesting read however, so if you have time you should really dig into her actual post.

As for the other side, AnachroCon’s board posted a short message regarding the resignation to their website, simply reading:

Effective April 2, 2017, Sarah Avraham is no longer Legal Counsel or Chairman of AnachroCon L.L.C. Effective this date she may not speak for, sign for, or enter into any legal agreement for AnachroCon, L.L.C.

AnachroCon Board of Directors

We reached out to AnachroCon for further comment, and only got this as a response:

Hello
Thank you for your interest, however under advice of Counsel, we are not able to speak about the termination of Ms. Avraham or her husband. This is due to possible pending litigation in this case.
– The Board of Directors

I’m honestly not even sure where to begin with that.

When you break it down, this whole thing (for me at least) comes down to the continued involvement of William MacLeod with the convention. Avraham’s claimed difficulties with the staff and board aside. the allegations against him have made many uncomfortable attending the con while he’s present and/or involved. Distancing him from AnachroCon was pretty much the con’s only hope of recovering its reputation regardless of whether or not the allegations are true. It’s pretty clear that the current board has no problem with him being there though, so maybe it’s worth it for attendees to find other outlets for their fandom.

It’s not like Atlanta doesn’t provide plenty of other options.

2 thoughts on “What the Heck is Even Happening With AnachroCon Right Now?”