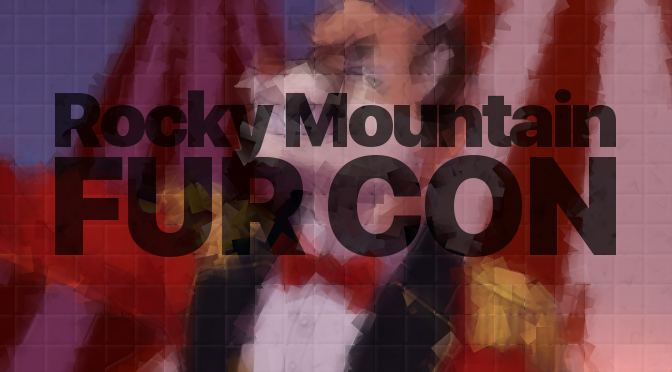 When most conventions end their run, it’s usually for pretty simple reasons. Either the con has run out of money, the organizers’ personal lives have gotten in the way, there isn’t enough staff to keep going, or they have unsolvable venue issues. For good or bad, it’s usually straightforward.

Well, this time it’s not.

Earlier this week, Rocky Mountain Fur Con (originally scheduled for this August) was officially cancelled. The con ended its decade long run in a bizarre set of circumstances involving a faction of Nazi Furries, the Sovereign Citizen movement, and a staff member on the sex offender registry.

Strap in. It’s going to be quite the ride.

Problems in Rocky Mountain Fur Con’s management aren’t anything new. Kendal Ray Emery stepped down as Convention Chair in 2008 after it became publicly known that he was a registered sex offender. We don’t know a lot of details about Emery’s offense, though searching the Colorado Sex Offender Registry tells us that he was convicted of sexual contact with a minor in 1993.

He was thirty at the time of the incident.

While Emery hasn’t re-offended or been accused of anything in the decades since, it wasn’t exactly good PR for a Furry convention trying to promote a safe image to have a registered sex offender in charge. Emery would also later sign over ownership of Mid America Anthropomorphic and Art Corporation (which operates Rocky Mountain Fur Con) to Zachary “Sorin” Brooks in 2011. This was most likely due to the same pressures that caused him to step down as chair.

Furry news website Flayrah also discovered that in 2011 MAAAC and Rocky Mountain Fur Con had lost their non-profit and tax exempt status, even though the event continued to advertise themselves as such on their about page and official Twitter account’s bio. The Flayrah article also alleges that organizers have not paid the necessary taxes since this happened, though when talking to the Denver Post Brooks denied this. Brooks stated that while the con did lose their 501(c)(3) status in 2011, the organization had started properly filing taxes after that occurred.

Regardless of whether or not MAAAC is compliant with what the IRS requires, claiming to be a 501(c)(3) when you’re not is fairly sketchy.

The amazing thing is, all of this is just a small factor in the failure of Rocky Mountain Fur Con. The larger issue (and what’s referred to in the statements actually released by the convention) have to do with backlash associated with a group called the “Furry Raiders.” For those of you outside of furry fandom, the “Furry Raiders” are a Colorado based group of furries founded by “Foxler Nightfire” who are, effectively, Nazis.

Yes, there are Nazi furries out there, and no it doesn’t make a damn lick of sense to me either. 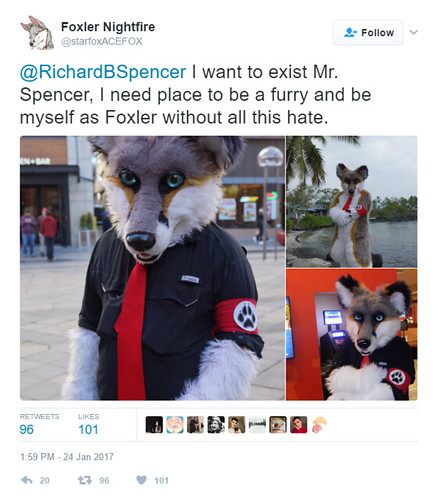 Now, in all fairness, if you asked the Furry Raiders if they were Nazis, they’d say no. I mean, sure — they wear arm bands based around the design of the Nazi party, replacing the swastika with a paw. And yes, their Fur Affinity page used to list their birthday as Adolph Hitler’s. And yes, the Nazi imagery is just plain everywhere with their stuff. And yes, their founder has said some pretty racist things. And yes, Foxler has… oh god, I could go on for hours.

So yeah, they say they’re not Nazis, but they’re totally Nazis.

The group doesn’t always get the warmest reception at events (due to the whole pseudo-Nazi paraphernalia thing), but one place they’ve found a home at is Rocky Mountain Fur Con. This doesn’t always sit well with the rest of the community needless to say. As the Dog Patch reports, one furry who wasn’t too fond of them goes by the name Deo. Deo made a joke on Twitter about punching Nazis (regarding the Furry Raiders), and that’s when the following exchange happened: 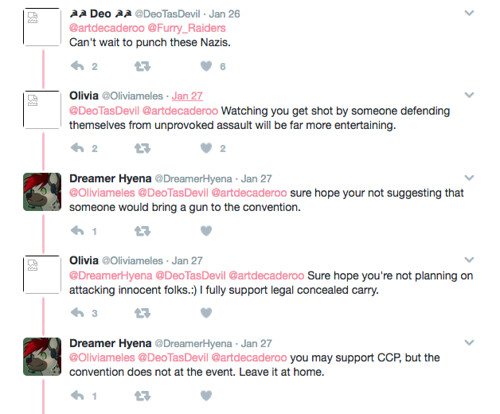 We had to include that as a screenshot since some of the tweets have been deleted. If you’re wondering why a random Twitter conversation is important, it’s because this (at least as far was we can tell) is the main reason the convention was cancelled.

If your brain has started hurting, I’m sorry.

Deo reported the incident to Rocky Mountain Fur Con. I mean, this “Olivia” person had said it would be entertaining to see Deo get shot and talked about bringing a gun to the con. The convention eventually responded, but not in a way Deo expected. You see, Deo received a very bizarre “cease and desist” letter in the mail:

I only found out about "Kahuki" Kendal Emery the convicted felon after he & RMFC/MAAAC doxxed me & mailed this fake-legal threat to my home: pic.twitter.com/LbyeS0qLPw

The letter, signed by Emery (who bizarrely identifies himself as “Chief Executive Contract Law Officer”) is full of legal sounding yet completely nonsensical text. They accuse Deo of “encouraging” the person who said it would be nice to see her get shot (which is a special kind of irony), and say that Deo has made “threats of violence against a class of people through a wire service across national boarders.”

I mean, besides the fact that Nazis aren’t a “class of people,” Deo (at least according to Dogpatch Press) is located in the United States. The word Emery was looking for is “borders” too (assuming he isn’t talking about people making threats over folks just trying to rent a room), and it’s kind of my favorite sentence of all time. He ends the letter saying that if there are any objections, Deo must respond to the letter or else she’s agreeing to its contents — which isn’t how cease and desist letters work even remotely.

You’ll also notice that Emery signed the letter in red with a red fingerprint. This is indicative of a whole other bit of weirdness – the Sovereign Citizen movement. Sovereign Citizens believe that they are not subject to the government or laws of the United States, and the FBI considers them a growing domestic threat. One of the more harmless things they’re known to do is insist on signing in red ink instead of blue or black (as they think red represents the blood of the people) and insist that a red fingerprint is the highest form of ID. If you don’t know how insane this stuff can get, here’s a hilarious example.

As Sovereign Citizens believe the States are meant to be separate nations, this may explain the bizarre “national boarders [sic]” line in the letter. As it’s also not uncommon for them to ignore tax law, it adds an interesting context to Flayrah’s allegations and Brooks’s subsequent denial. One of the favorite weapons of Sovereign Citizens is to try and send fake documents and make frivolous legal filings against those they believe to be their enemies.

So, while taking the side of a bunch of Furry Nazis, the con decided that the only way they could keep operating was to increase security. You know, to stop the person who joked about punching people and not, say, the person who talked about people getting shot and implied they might bring a gun to the con. This cost must have been too much, because they then announced they were cancelling the con over these concerns.

I’ve embedded the official message from the con above, and you should click through and read the whole thing. Honestly, the irony is amazingly thick – as the “hate and intolerance” they refer to is hatred of Nazis. I mean, the con is saying that it’s wrong to hate a literal hate group. I cannot even begin to fathom the cognitive dissonance of this statement. The con has said they will refund as many people as they can, but that they may not have the money to do so.

I honestly wouldn’t hold my breath if you’re expecting your money back.

In the end, the con’s actual cancellation makes very little sense. Any real “security” threats really seem like they’d come from the people the con is actually defending, and I can’t see the financials suddenly going in the red because of it. Something else is happening here, but I’m not exactly sure what it is.

If I ever find out, I’m sure it will be depressingly hilarious.

9 thoughts on “The Bizarre Fall of Rocky Mountain Fur Con”