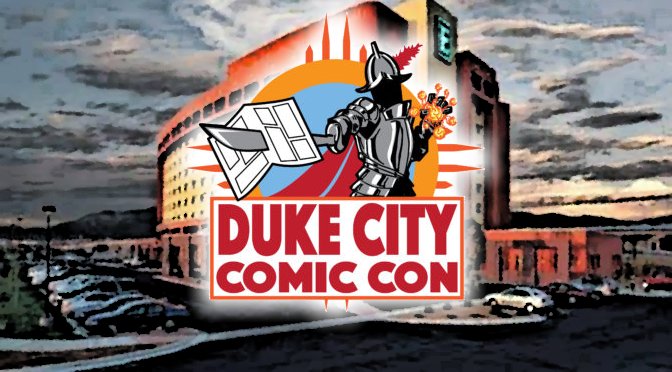 Albuquerque based Duke City Comic Con is scheduled to take place this weekend, but just over the last few days the con has managed to get itself in hot water. It all started innocently enough when the convention organizer decided to run a Mother’s Day promotion on the Sunday of the con. It’s a pretty straightforward deal: Mothers can get in free if they come with someone buying a full priced adult ticket.

That seems like a rather nice deal for attendees, and it’s hard to see how this promotion could possibly produce any controversy.

What it comes down to is the way Duke City Comic Con organizer Jim Burleson posted about it, and then how he reacted to the criticism afterwards. It really is kind of amazing how through basic ineptitude a potential PR coup can be transformed into an event’s PR nightmare.

But that’s getting ahead of ourselves.

If you’re wondering about initial post that started this whole thing, this is what went up on the Duke City Comic Con official Facebook page on Friday night:

Most of this post is fine, but one part that stuck out to a lot of people was the “bring a man” portion of the message. It was a bizarrely specific call out, and (especially in comics culture which definitely has a misogyny problem) it irritated folks. Some people commented angrily, and at least one person messaged the convention to complain.

And this is where organizer Jim Burleson took what could have been an easily correctable minor mistake, and, rather than fix it, steered into it harder. After rudely responding to the private message, Burleson took a screenshot of it and posted it to both his personal facebook page and to well known comic con discussion group Rate That Comic Con. 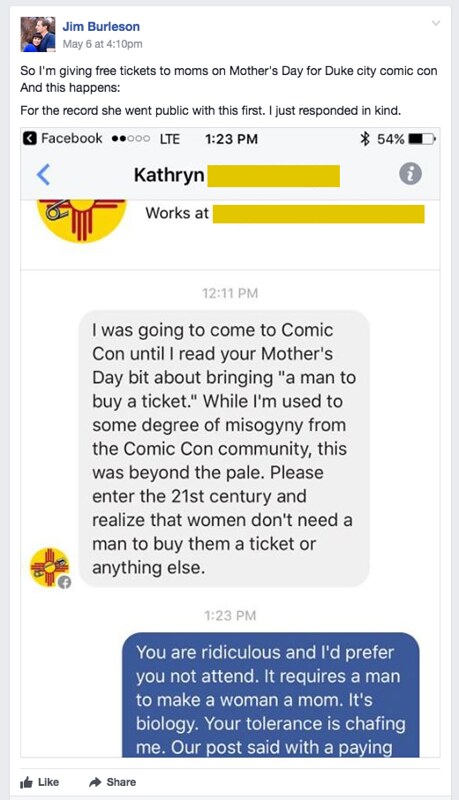 We’ve chosen to obscure the person’s last name and employer, but Burleson left them uncensored on his original posts. We should also point out that while Burleson says “she went public with this first,” we can find zero evidence of this.

There is so much to unpack here. First off, while it’s true that Kathryn was a bit harsh in her message, the first rule of dealing with the public when running an event is to never take things personally. She has a point that the “bring a man” portion of their post fell into sexist tropes, and all Burleson had to do was respond “that wasn’t our intent, but we can see how you read it that way.” Then just delete the line from the original post… and everyone would have a better day.

But instead he harshly doubled down on his statement, completely ignoring single mothers and same sex couples. He also makes it worse by demanding “it requires a man to make a woman a mom,” which ignores adoption and the fact that plenty of trans women are more than capable of procreating. If there was an award for writing the absolute worst response possible, Burleson would have won it.

Beyond the awful response was the fact that he reposted it publicly. Posting private correspondence from an attendee and revealing their name is a huge no no for any organization, and opens up Burleson and the con to any liability if Kathryn receives any harassment over it. It’s also mind boggling that Burleson remotely though this response made him look like the good guy. If there’s any doubt that the organizer thought the world would side with him, it’s the ridiculous edit he then made to the original post in the controversy’s wake:

I cannot fathom what petty part of Burleson’s brain thought this was going to make anything better for his business. There is zero chance the words “non offensive identifying companion” was meant to do anything other than mock those bothered by what he said.

This morning someone must have come to their senses though, as any posts using that wording were removed from the Duke City Comic Con Facebook page.

None of this is super surprising though. Jim Burleson is no stranger to either making offensive statements or publicly reposting correspondence he shouldn’t. You may remember a year ago when using the Santa Fe Comic Con page (which he also runs) Burleson made really dumb comments about women cosplayers and reposted private, uncensored correspondence with actress Amy Jo Johnson’s agent. When called out on any of this, Burleson initially doubled down, lashed out, and then later deleted the posts.

Frankly, this is starting to look like a pattern for the guy.

I can say that I hope Burleson has learned his lesson this time around, but I’m honestly not sure he will. There are ways that are appropriate to talk to your customers, and if you aren’t prepared to accept a little bit of hostility when you make a mistake — maybe you shouldn’t work directly with the public. It’s unprofessional, it’s childish, and it’s so easy not to mess up it’s alarming that it keeps happening.