It was 2005 the last time a new episode of Star Trek aired on TV. Let that sink in.

The franchise has been off the air for more than a decade, and after not only all this time, but also a lackluster 50th Anniversary celebration, fans have been desperate for any new Star Trek. These last couple of weeks would see Trekker’s wishes granted though, not only by the debut of Star Trek: Discovery, but also by The Orville, an obviously Trek-inspired spoof produced by and starring Seth MacFarlane.

Over the last few months, as rumors of issues behind the scenes plagued Discovery‘s PR, some fans joked that with The Orville we would be able to get at least one good Star Trek show. Now that both are out, I think its time to put that theory to the test. We’re going to compare the debut episodes of these two shows to see which one is the better Trek. 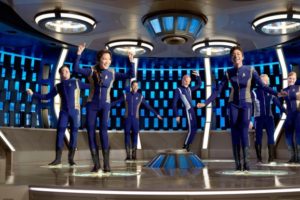 Now to be fair, I’m only looking at the first episode of each show. As of now The Orville has aired four episodes, while Discovery has aired the first half of its pilot on CBS with the second already on CBS’s (super dumb) All Access Streaming service. We’re ignoring the rest of those for simplicity’s sake though. We’re going to compare the two series based on a few relevant pieces of criteria: Story/Tone, Visuals/Production Design, Lead Characters, the Ensemble, and Long-term Potential.

Story:
The Orville opens with space explorer Ed Mercer (Seth MacFarlane) coming home to find his wife in bed with an alien. One year later he is divorced and no longer considered an exemplary officer for The Union (the stand-in for the Federation). Nevertheless, he is given one more chance, when an Admiral played by Victor Garber offers him the command of an unnotable Union vessel, The Orville.  Partnered with his ex-wife and an eclectic crew, they explore space while making sophomoric jokes on an episodic basis. 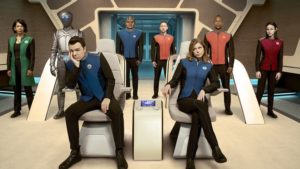 Fascinatingly, while The Orville’s approach is essentially “90s Star Trek with Jokes,” Discovery sets out to bring Star Trek to the into the modern era with a serialized plot, rather than stand alone episodes. While Trek has done this before,  its been an even longer time since Deep Space Nine ended. Rather than focus on the Captain, Discovery‘s main character is Michael Burnham (Sonequa Martin-Green), a first officer for the Federation. Burnham was also on the fast-track for her own ship, but her less than traditional intergalactic upbringing takes her off that track and directly at odds with the still unfamiliar Klingon Empire.

Tonally, The Orville mimics Star Trek The Next Generation and Voyager fairly well. When its not trying to be funny, it actually compares pretty favorably to both of those shows, but therein also lies the problem. When The Orville is being a Trek knockoff it’s very strong, unfortunately, it’s also trying to be a comedy — where it falls painfully flat. Nine out of ten of the jokes fell painfully flat and rely on really sophomoric humor. I feel like “Star Trek, but with regular people” might make for a good sketch, but a series of hour-long episodes could stretch what is essentially one joke really thin.

Meanwhile, Discovery is very familiar and recognizably Star Trek, but it’s also not derivative of the series that came before it. This show is trying to do something new with Star Trek. The look is more cinematic, the story feels larger in scale, and the serialized story structure only assists this. Discovery wants to be something epic and it feels like it knows how to do that.

Production Design:
The Orville‘s sets and costumes are also reminiscent of 90s Trek. The inside of the ship is well lit, the Bridge design is almost one-to-one with any Federation ship from Star Trek. Event the titular ship basically has a saucer section and light-speed engines in the back. It really doesn’t look bad, all things considered, just really derivative. We all know it wants to be Star Trek, it just legally isn’t. The show does still look very nice, and it’s not just the ins and outs of the ship — the alien make-up is on point. With some occasional cheesy exceptions, you can’t knock The Orville‘s look.

Discovery uses mostly familiar Trek design language, but the budget is clearly much higher than the TV Trek shows that came before it. This has its ups and downs. Some may not take to the very Kelvin Timeline inspired look of the interiors of the Starfleet ships. The new uniforms also seem to be a continuity hiccup, but they honestly look so snazzy, I personally can’t knock them. 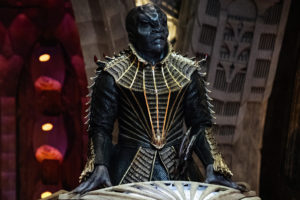 What I will knock is the designs of everything Klingon. While Klingon fashion could easily be different in different parts of the universe, the look of the Klingon’s heads and the design language of their ships simply does not match with the established Klingon aesthetic. Frankly, these deviations are not the kind that are easy to overlook. Still, if it serves the story, there’s then I see it as very deal-with-able.

Lead Characters:
Captain Ed Mercer is Seth MacFarlane. I’m not saying that because that’s who’s playing him, I’m saying that because he’s really just playing himself as a Star Trek captain. So yeah, if you ever wanted a smug, sarcastic and self-righteous Trek captain, that’s what you’re gonna get. Its hard for me to like this guy. His other issues are only made worse by the fact that he’s not dealing with his divorce in a particularly healthy way. To the show’s credit, this is at the very least treated as a character flaw. It isn’t helping that he usually comes off as self-righteous jerk still. 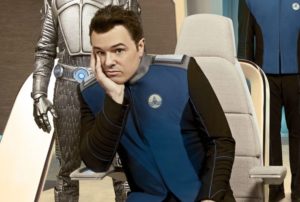 Sonequa Martin-Green’s Commander Burnham, on the other hand, is introduced as an expertly balanced character. Her past makes her unique enough to be interesting, but her character flaws make her not come off as overpowered.  Martin-Green’s performance is fantastic and she is instantly compelling as a lead character. Even if she didn’t have a strong supporting cast, I feel that she could carry this show on her own.  Speaking of the supporting cast,

Ensemble:
The Orville has a surprisingly strong supporting cast, not the least of which being Adrianne Palicki as Kelly Grayson, Mercer’s ex-wife. The crew are certainly all unique and have a mostly good dynamic with each other. There are some exceptions though. The Helmsman played by Scott Grimes comes off as an unprofessional slob, and he seems to only exist to make off color jokes. There’s also a robot named Isaac who the supposed to be from a race of robots that look down on organic life. They only play lip-service to this though, as Isaac shows little to no resentment of his situation or even dislike of the rest of the crew. 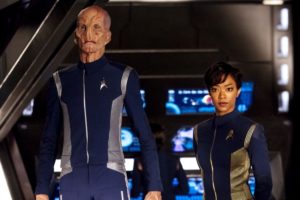 It’s hard to rate the cast of Discovery now with what we have out, even moreso from just the first episode which is the first half of a two-parter. I can say Doug Jones is certainly in his element playing a tall skinny alien with heavy prosthetic make-up. Since this episode is basically a prologue, we will have to patiently wait to see how Burnham’s supporting cast will hold up.

Long-Term Potential:
Like I said before, I’m worried that The Orville won’t be able to maintain this tonal whiplash for its entire run. When it’s being a sci-fi show, its a very good sci-fi show, but as a comedy, it falls very flat. Hopefully, come the mid-season hiatus, MacFarlane and the crew can take a step back and focus on what does and doesn’t work. With any luck, they’ll realize they have a good sci-fi show that’s being held back by immature comedy. Even then though, when The Orville  is at its best, its aping the feel of how Star Trek used to be, staying with the formula that Brannon Braga (who is also producing The Orville) enforced and adhered to to the point that it became a kind of boring status quo.

It’s that same status quo that Discovery is trying to break.

I want to believe Star Trek: Discovery will be a positive step forward for the series. Its biggest hurdle is going to be finding viewership with CBS’s terrible choice of putting it on a mostly untested, pay-to-use streaming service. This show has so much potential and I don’t want to see it wasted.

Conclusion:
I feel comfortable saying Star Trek is finally back, and while I feel The Orville wants to continue that spirit, it’s still stuck in what Trek used to be. Discovery wants to take the franchise into the future and I sincerely hope it’ll be allowed to boldly go there.

One thought on “Trek Off: Comparing ‘The Orville’ to ‘Star Trek: Discovery’”