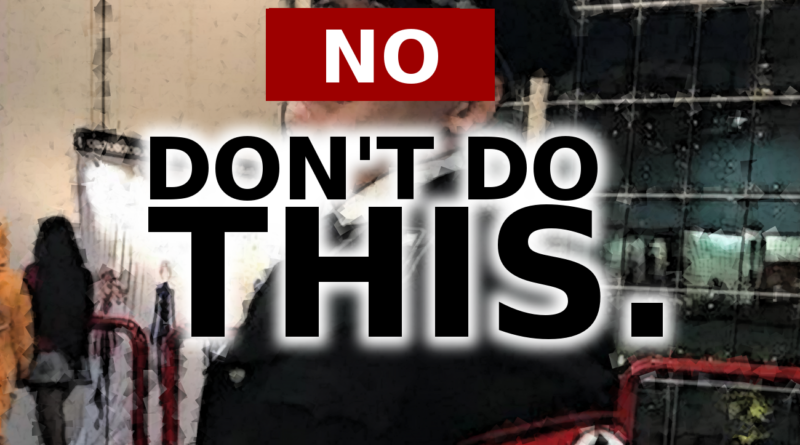 There was a point in my life where I thought that there were things I wouldn’t have to explain to people, but I think it’s safe to say that we’ve moved well beyond that now. Over the last few years I’ve learned that there’s nothing so obvious that someone doesn’t need it spelled out to them.

This is one of those instances.

It’s been widely reported and spread around social media already, but last weekend at Houston’s Anime Matsuri this happened:

Now Anime Matsuri (as a convention) is kind of a miasma of problems that it’s best not to wade into here, because that’s not what’s important right now. What’s important is that a guy walked around the convention in a Nazi uniform and (from all accounts) hijacked a panel room and read a bunch of weird Anne Frank/Dragon Ball Z fanfic. There are rumors of other inappropriate behavior, but frankly — that’s enough to be pretty messed up.

This is, obviously, not the first time a Nazi uniform has shown up at a convention. Those of us in the con scene have seen cosplays based of characters who wore Nazi uniforms going back decades. What makes this different though is that people seem to now be dressing up as Nazis not to be Marvel’s Red Skull or some character from Hellsing, but just to be Nazis.

Last year, Portland, OR based Rose City Comic Con had to explicitly ban Nazi-related cosplays after some guys walked around their 2017 event wearing Nazi Uniforms weirdly modified with Hello Kitty arm bands. This wasn’t cosplay, this a statement. The people wearing these Nazi and Nazi-based outfits aren’t doing so out of love of a character, instead they are wearing them because they like dressing as Nazis.

We live in weird times right now, and they’re unlike any I could have imagined growing up. White supremacists are organizing online and in real life, and their seeds are making their way into our strange little corner of the world. In the Furry community it’s pretty apparent with the often reported on Furry Raiders, but these people are lurking in the rest of fandom too, just less visibly.

In my experience there are two kinds of people who do this, and neither are good for geek culture or the con scene. I mean, the first kind of person is a Nazi, and it should go without saying that actual Nazis are bad. The other kind of person claims they’re doing it to be “edgy” or trolling to “get a reaction” — and that is just as harmful. If you think that making people feel threatened is “hilarious,” you are, in fact, a bad person.

But frankly, if you’re comfortable putting on a symbol of mass genocide as a joke, you’re probably still at least a little bit of a Nazi.

So I guess I have two requests here. One, if you’re attending a convention, don’t wear a Nazi uniform. Even if you’re cosplaying someone specific… just stop. There are real Nazis walking around, and it’s going to make people feel people unsafe. Two, if you’re running a convention, don’t let this shit in your doors. Update your policies to prevent it (if they don’t explicitly ban it already). Here, I’ll even give you some example text off the top of my head you can work into your attendee agreements/policies:

Hate Symbols and Associated Iconography:
As we strive to provide a welcoming, safe environment for all attendees, symbols associated with historical atrocities and current hate groups are strictly forbidden from the convention. This includes (but is not limited to) swastikas, Nazi uniforms, cosplays closely based on Nazi uniforms, and paraphernalia associated with these organizations. While in an ideal world it would be easy to separate fictional characters who wear these items from real world events, in our current political climate we do not believe it is possible. Anyone wearing or displaying an item of clothing, prop, or other item considered a hate symbol will be asked to remove it from the convention and refusal to do so will result in ejection from the convention without refund.

There – just slap that in and be willing to enforce it. If we work together as a community, we can prevent these people from finding further root within our ranks. Let’s make sure they know that we, as a community, are dedicated to inclusivity, diversity, and providing a safe environment for all attendees, and that those who preach hatred are not welcome in our doors. Because guys, I hate to break it to you, but (regardless of how much some people want to deny it) our conventions take place in the real world.

Let’s do our best.