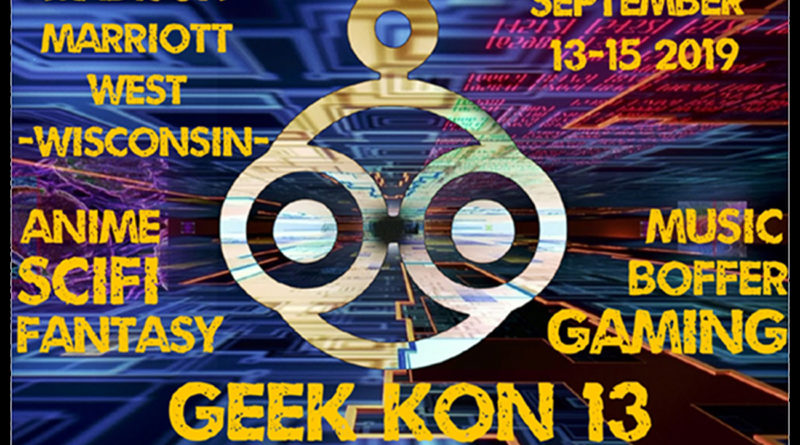 Yesterday, after twelve years, Geek.kon has officially called it quits. In an announcement made late last night, the Madison, WI based convention has announced that they will not be holding their previously announced 2019 event.

It is with deepest regret that we must announce the cancellation of the 2019 Geek.kon Convention.

Over the years, the staff of Geek.kon have always enjoyed putting our best effort into bringing as much geek culture as we could into one place and sharing it with our attendees. Geek.kon could not be what it was without everyone’s love and desire to share our passions with each other.

However, in the last couple of years, Geek.kon has found itself struggling with issues both financial and internal. At the end of the 2017 convention year, it was looking as if a following year would not be possible. Despite last year’s change in management and consultation of business professionals in hopes of repairing the damage done in previous years, the flooding in 2018 a week before the convention was the final blow.

After exhausting what options we had available, it was concluded that Geek.kon 2019 was not viable. As such, we plan to take a year off, re-evaluate, restructure and hopefully come back better than ever. We will be working as quickly as possible to refund all attendees, artists, and vendors who had pre-paid for the 2019 year

Again, we are deeply sorry about having to cancel this year’s convention and any unfulfilled expectations this may cause. Even without our event this year, we hope people will continue to share their geeky passions with one another and continue to loudly and proudly ‘Get Your Geek On!’

The official statement leads us with more questions than answers. While Geek.kon’s 2018 attendance was certainly affected by the flooding, it was not the sole reason. There was, additionally, an informal boycott of the 2018 event by a group of long time attendees due to the mentioned “change in management.”

I originally wrote up a whole section on that bit, but it’s just… a lot. Some people were forced out, some people resigned (including the con’s entire security team), and it was a whole big mess. Buy me a Diet Coke at a convention some time and I can explain it to you.

It’s not really news, but boy is it a story.

It also makes us ask if the con was having financial difficulties, why did the con invite guests like Michael Winslow and MC Chris? Both of which are more expensive than the event’s typical fair, and are of fading relevance to the con’s normal under-30 demographic. While I’m a fan of both, I’m also a decade older than the typical Geek.kon attendee.

In the end though, regardless of any issues with the current staff, losing Geek.kon is a major blow to the Wisconsin con scene. Geek.kon was one of the early additions to the state’s unique, non-profit calendar of events. Founded in the 2000s as a part of new conventions that filled the state, its end is definitely a warning sign for other conventions in the area. It’s rare that cons come back from a “hiatus year,” so the odds aren’t exactly in their favor.

2 thoughts on “Geek.kon 2019 Has Been Officially Cancelled”