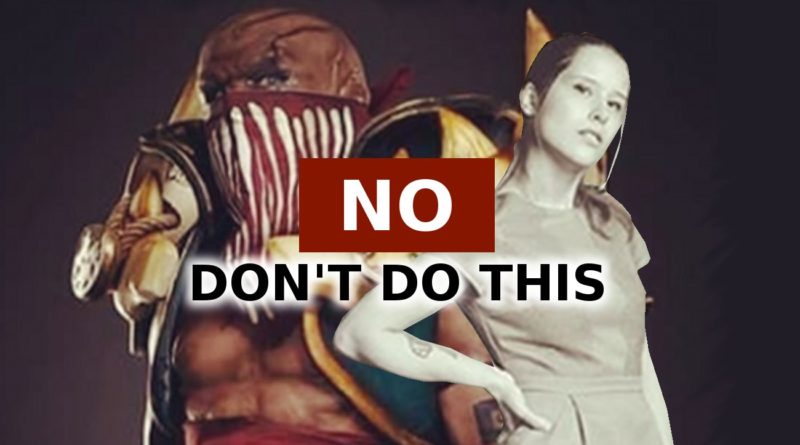 This is one of those articles I thought I’d never have to write, but hey — it’s not the first time I’ve had to explain the obvious. So I guess I’ll spell it out for you: don’t ever do blackface even if it’s for cosplay.

Let’s see how we got here though.

French cosplayer Alice Livanart recently won the France Cosplay Cup for her cosplay of League of Legends character Pyke. The problem here, of course, is that Livanart is white and the character Pyke is black.

#POWEROFCOSPLAY ✅ This is the true power of cosplay ! I made Pyke (@leagueoflegends ) because I wanted to show everyone that you can be whoever you want. 💪 I won the french cup of cosplay with only one purpose : making Pyke real 🏆 I wanted to push crossplay on a whole new level even though it was the hardest cosplay I ever made. My goal : inspiring people to go beyond their limits 🍾 . . Photo left : @b.rugraff . . #cfc2k19 #cfc #coupedefrancedecosplay #pykelol #pykeleagueoflegends #leagueoflegendscosplay #leagueoflegends #pykecosplay #pyke #bilgewater #moba #lolcosplay #powerofcosplay #power #sfx #silicon #protese #crossplay #protesedesilicone #smoothon #riotgames #videogame #livanartcosplay #sidebyside

Needless to say, a lot of people weren’t exactly happy about this. Livanart’s win would advance her to the finals in the EuroCosplay Championship (which will be held at MCM London Comic Con). And while it’s clear that the judges of the France Cosplay Cup have some answering to do for giving this costume the win, the EuroCosplay Championship official twitter account officially announced on October 8th that Livanart would not be competing.

We hear and appreciate all of your concerns regarding the costume of one of our finalists. We would like to confirm that this cosplay will not be appearing in the event, and we would like to apologise for any offence caused.

“I am not saying blackface doesn’t exist. I am saying Pyke isn’t blackface. I made Pyke with all the love I have for that character. He is amazing and I just wanted to be him, because I love him. And that’s cosplay. Pyke is a fictitious character, he doesn’t exist. The only reason he’s alive and walking is because there’s something magic in cosplay.”

This is, of course, absolute BS.

It doesn’t matter if you’re dressing up as a fictional character or not – the fact is most historical instances of Black face were people dressing up as “characters.” Blackface is wrong, and if you don’t believe me, maybe you’ll believe the chair of Washington State University’s department of critical culture, gender, and race studies David Leonard. In 2012 he wrote:

Blackface is part of a history of dehumanization, of denied citizenship, and of efforts to excuse and justify state violence. From lynchings to mass incarceration, whites have utilized blackface (and the resulting dehumanization) as part of its moral and legal justification for violence. It is time to stop with the dismissive arguments those that describe these offensive acts as pranks, ignorance and youthful indiscretions. Blackface is never a neutral form of entertainment, but an incredibly loaded site for the production of damaging stereotypes…the same stereotypes that undergird individual and state violence, American racism, and a centuries worth of injustice.

And look — yes, you can cosplay characters of other races. Most anime characters are asian, and no one’s asking white cosplayers to stop playing those characters. Heck, a white cosplayer can cosplay a black character. The important thing is you just don’t alter your skin color. That’s all you have to do. And if you don’t think you can accurately cosplay a character without doing so, maybe don’t cosplay that character. Or, y’know, just be okay without being perfectly “accurate.” Cosplay exists within a real world context, and maybe you should make sure you think about that context before suiting up.

This is not frickin’ hard.

Moderator’s note: Any comments defending the use of blackface by Livanart will be deleted

3 thoughts on “Dear Congoers of the World: Why Do I Have to Tell You Not to Do Blackface?”