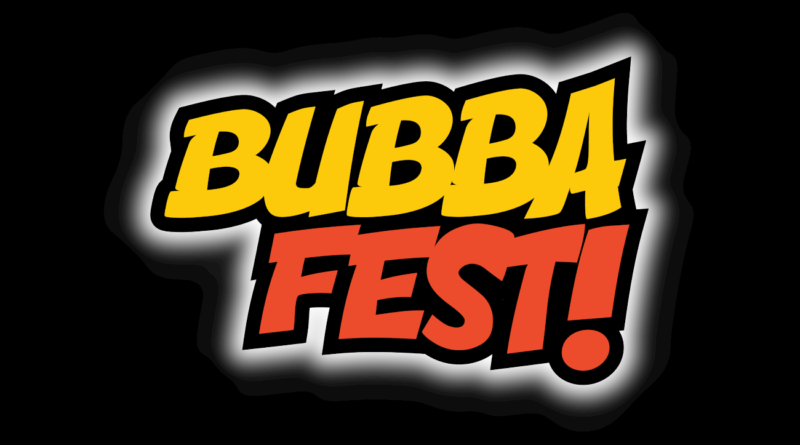 I wouldn’t be surprised if you’ve never heard of Bubba Fest. It’s a regional comic convention held in Knoxville, TN. Mostly the con had previously only crossed our radar when they invited Vic Mignogna as a guest last year while everyone else was busy saying “hey, maybe dudes with multiple documented sworn accusations of sexual harassment against them might be a bad choice for con guests.” Cuz, you know.

Or maybe you knew that convention owner Chris Lewis used to professionally represent Mr. Mignogna. Or maybe you’ve heard that this con originally filed for bankruptcy, but withdrew it after getting a PPP loan. Or maybe that Bubba Fest weirdly lied when Gilligan’s Island star Dawn Wells (notably one of the creditors on that withdrawn bankruptcy) withdrew from an appearance in 2019. Or maybe it was just that time that Game of Thrones actor Nikolaj Coster-Waldau compared the event to the notorious Fyre Festival on national television.

But none of that is what we’re talking about today.

What we’re talking about is how shortly after the death of Supreme Court Justice Ruth Bader Ginsburg, for whatever reason, the person who manages Bubba Fest’s social media pages (who we presume to be owner Chris Lewis) posted a number of American flag emojis with a link to a clip from “The Wizard of Oz” with the title “Ding Dong the Witch is Dead.” The convention defended the decision in the post’s comments. 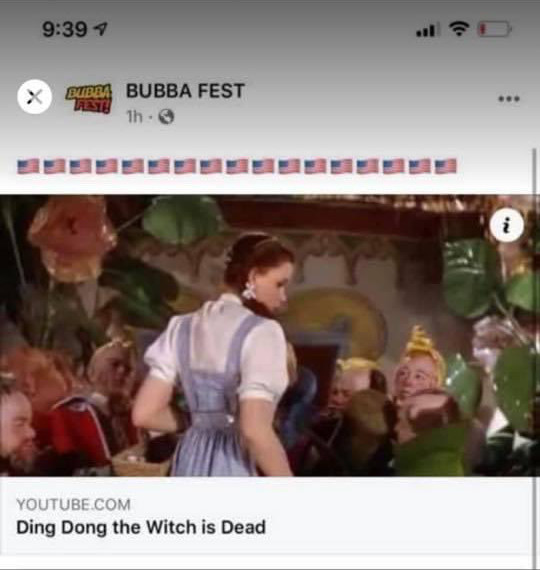 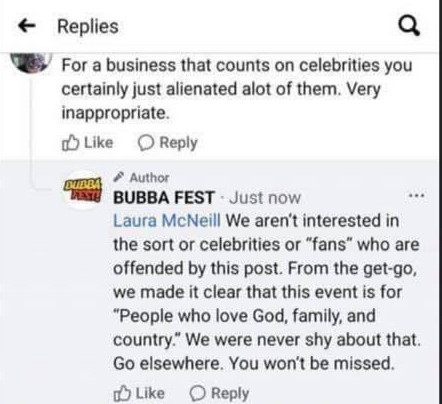 For the most part this sort of thing would have drifted into the past, but the post gained significantly more traction once Doctor Who and Arrow star John Barrowman tweeted screenshots of it calling out the event.

#FanFamily #confamily these posts from #bubbafest don’t offend they are just sick. #RuthBaderGinsberg believed in God, Family & America. You have just confirmed you’re bigoted and Assholes. #fanfamily Go leave them your thoughts on their Facebook page. Search Bubbafest. Jb pic.twitter.com/e8afRmDnPX

How did the person running Bubba Fest’s social media account respond to this? Did they decide to try and calm things down? Did they play damage control? Well, no – instead they responded by effectively accusing Mr. Barrowman of tax evasion. 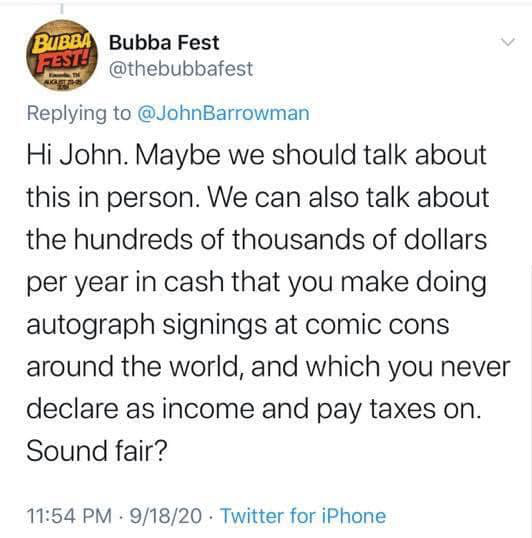 This is obviously a confusing response. And maybe someone came to their senses, because this tweet (and all other tweets around it) later disappeared from the Bubba Fest official account. Additionally, the convention then posted an extensive backpedal to their official Facebook page.

Last night I made a post that made some folks laugh, but made some other folks literally want to see me dead. I want to address this.

As you all know, we are at a turning point in our country right now. We’ve never been more divided as a people than we are right now. The violence and civil unrest, demonization of each other in both social media and the news media, and absolutist mindsets of various groups have us on the brink of a second civil war. My regret and apology stems from the fact that my post fanned those flames, even on a relatively small scale. And truthfully, it was in poor taste and un-Christian of me to intentionally troll the passing of an historic figure in our country’s history. Regardless of my or anyone else’s opinions on Justice Ginsburg’s record on the USSC, the fact remains that she served our country on its highest court for 27 years, and along the way, championed equality for women in several very significant decisions. That alone warrants extending a degree of respect to her, and to those who mourn her passing.

Whether it’s one side mocking and cheering the death of Herman Cain, or the other side making insensitive jokes about the death of Justice Ginsburg, all of the hatefulness needs to stop. There is no reason for us as a people to continue to use language that dehumanizes and/or devalues each other. There is no place in a civil society for harassment, making threats, slandering, and the rancor that these behaviors cause.

Y’all don’t support this show because you want to be “red-pilled” or to have political discussions. If you want that, you can tune in to Tucker, Sean, Don, or Rachel, all of whom are professionals at it. You come to fan events to be entertained. So in the future, we will steer clear of politics and keep our focus on providing entertainment to our thousands of fans (from 33 states and 11 countries in 2019!) – whether that turns out to be in 2021 or further down the road.

Until then, may we all follow our First Lady’s advice to “Be Best.” Have a good weekend with your families, as tomorrow is promised to none of us.

This is a very different tone than Lewis’s previous statement on the matter.

We reached out to Bubba Fest for comment, and were directed to the previous statement on the Facebook page. Additionally Chris Lewis directly sent me a number of Twitter screenshots from a couple of writers and comedians making jokes about the deaths of Herman Cain and Antonin Scalia. He also attached some random woman who was run off of Twitter for being mad about Trump, along with a compilation of tweets from people expressing anger over the political process.

It is downright puzzling.

Most of these tweets have literally nothing to do with anything other than “some people have political opinions that disagree with Chris Lewis.” For the few examples of people mocking the deaths of Scalia and Cain, I think Lewis misses the part where those come from comedians and writers who were ready for the backlash. These are not people running community centric events, and if any of his examples like that had come from conventions maybe he would have had a point.

You can’t complain about political division with one hand while sowing it with the other. If you’re going to say things that you know will piss people off, don’t start clutching your pearls when you get the reaction you were asking for. You don’t get to cry “but whatabout” when you get called out afterwards, and claim that “other people were also mean” — especially when those “other people” weren’t in anywhere near the same position as you are. In a staggering act of lack of self awareness, Lewis literally finished his response to us with the quote “Everyone needs to take a good, long look in the mirror and decide how they can do better.”

It’s like lighting a fire and complaining about the heat afterwards.

I should also mention that this response didn’t come from the official Bubba Fest Facebook page we originally reached out to, but Chris Lewis’s personal Facebook account instead. This is because the Bubba Fest Facebook page is no longer active, as Lewis has “temporarily unpublished the page” saying it was in need of some updates. Lewis says the page should be active again later this week.

Who knows what will be on it.

Update: Within an hour of this article going live the con’s Facebook page was reactivated. Despite saying it was down for updates, there do not appear to be any significant changes to the page.